Last Sunday, Twitter user @jazz_inmypants kicked off a thread asking the community to share movie mistakes, bloopers, pictures and plot holes that bothered them but simply are not talked about enough.

He first shared his own: “naming the ant in A Bugs Life ‘Flick’ is super insensitive to ants that have died from flicking. It’s like if they named Bambi Shotgun.” 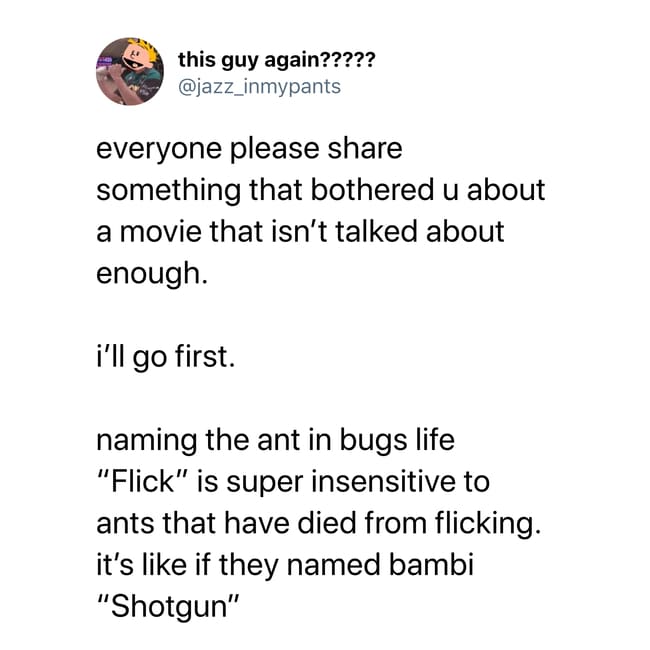 Average Joe’s tweet garnered thousands of illuminating replies from folks who were BOTHERED by some BOTHERSOME movie details!!!. Here are 31 of the best.

jason from friday the 13th was 11 when he drowned so he should’ve been an 11 year old serial killer in all the sequels!!! that would’ve been sick

Weekend at Bernie’s. How TF didn’t anyone smell a dead body over the entire weekend

In the parent trap, the fact that the parents were just okay with splitting up their kids and never seeing the other one ever again??

Willy Wonka – The poor mom slaving away for years doing laundry for a living while caring for all of the bedridden grandparents only to find out that Grandpa Joe was perfectly capable to bound out of bed and head off with Charlie after he won the Golden ticket.

Grease is a movie that’s message is change yourself so other cool people will like you.

In Disney animated movies, the main character has an American accent, the bad guy has an English accent, and everyone else has the accent of the country it’s set in.

Beauty and the Beast (1991) – How does Belle’s village support such an extensive bookstore when she’s the only reader in town and she doesn’t even pay for her book?
— @lbeach5885

Jenny kept her son a secret from Forrest Gump for three years, knowing he’s the father and only contacted him after she’d been diagnosed with an incurable disease.

In the Polar Express, Billy (the poor kid) finds his present in the workshop that is going to be his FIRST CHRISTMAS GIFT EVER, meaning 1 of 2 things:

1. Sweet, shy Billy has always been on the naughty list

how they gonna say that the wizard of oz is a classic when they did that basic 4th grade writing trick of “aNd It WaS All JuST a DrEaM” like fuck off.

i wanted to believe witches and munchkins are real. why would they do that to us? who decided that shit? i just wanna talk

Were Westley’s nipple cups in the pit of despair in Princess Bride absolutely necessary?

17. (The fish should be below the waterline, in other words, you should only see the air in the top of the bags…right??)

This disregard of gravity… pic.twitter.com/IdNX4zBSuV

in sky high, during those stupid PE hero/villan exams they literally try and kill each other and no teacher tries to stop them, and shouldnt kids that play the villain role be sent to counciling???? or locked up?? or at least TALKED to??

Endgame Spoilers: That a rat is the only way in 14,000,000 different realities that the universe could be saved. pic.twitter.com/lOnjbN25wG

In Lion King There are no other males in Mufasa’s pride, so the super sexy Can You Feel the Love Tonight scene is between siblings — @professorxavi

I always wondered how Batman got back to Gotham in the Dark Knight Rises. He crawled out of a hole in the middle of the desert with no money and no ID and suddenly just pops back up in Gotham which is under fascist rule at the time?

this part in beauty and the beast has never left my mind. it’s what I see when I have sleep paralysis, it is the worst thing my eyes have beheld pic.twitter.com/u7aT3g7JPo

Nate from The Devil Wears Prada is a Chef—one of the most time-demanding careers out there—and instead of understanding Andy’s late nights, and dedication to an equally time-demanding job that’d land her in her dream career, he threw pity parties left and right.

The Bellas should not have won in the second Pitch Perfect.

Both Stuart Little and Ratatouille star small rodents with an expected lifespan of 12-24 months. Stuart would have died in the orphanage and Remy would have never lived to see his own restaurant.

Clueless………she ends up with her step brother????? Literally no one else is ever weirded out by this??????

In Endgame when they had Thanos and were trying to pull the Infinity Gauntlet off his hand, instead of Dr Strange making a portal above his head for Mantis to jump through to make him sleep, he could have just lowered that portal over Thanos’ head and closed it, decapitating him.

In Toy Story, Buzz doesn’t think he’s a toy. However, he flops whenever humans enter a room, which is a voluntary toy rule, which they break in front of Sid. If he thought he was a space ranger, he wouldn’t flop.