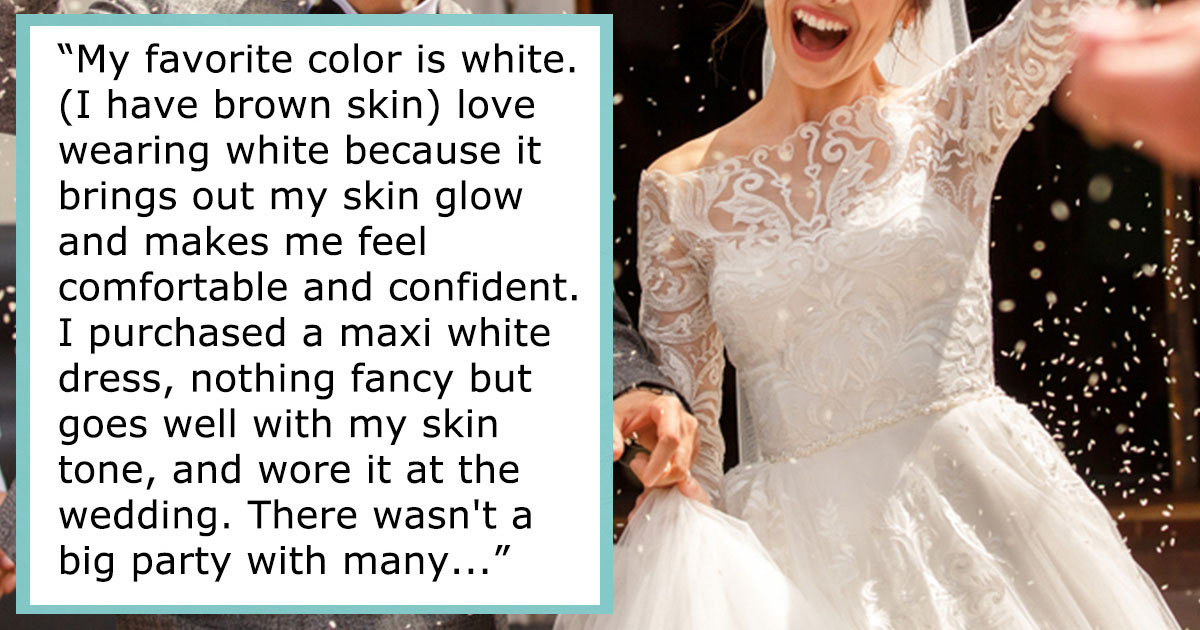 It’s a well-known fact that the only person allowed to wear white to a wedding is the bride. If you do, expect backlash, or at the very least, comments from other wedding-goers.

It’s in poor taste to wear white because it upstages the bride on her wedding day, and it’s bad luck. That’s an old superstition, but why tempt fate, right?

One woman who didn’t seem to get the memo decided to wear white to her cousin’s wedding but claims it’s okay because she is blind.

Her family didn’t agree, so she asked folks on Reddit in the popular r/AITA or r/AmITheA**hole to find out if she was in the wrong.

Here’s how it played out:

I’d like to start by saying that me and my female cousin (blind from birth) aren’t very close but we get along well as relatives. She’s 26 and her wedding was last week. She sent me an invitation though we don’t talk much but since I wanted a break from work I decided to go.

The OP claims that white is her favorite color and it makes her feel “comfortable and confident.” She figured “no one would even notice.”

My favorite color is white. (I have brown skin) love wearing white because it brings out my skin glow and makes me feel comfortable and confident. I purchased a maxi white dress, nothing fancy but goes well with my skin tone, and wore it at the wedding. There wasn’t a big party with many guests. But sort of family dinner and a small celebration. I really thought no one would even notice I was wearing white.

Her aunt explained that just because she is visually impaired doesn’t make a difference in this situation.

My cousin and her husband didn’t know because obviously, no one told them. But My aunt kept giving me uncomfortable looks the entire evening. And so did my other cousin. Once I decided to leave. My aunt pulled me aside and berated me for wearing this color at her daughter’s wedding.

She said just because her daughter is blind doesn’t mean she’s stupid and doesn’t know what’s going on around her. basically saying I brought negative energy and disturbed the celebration by having guests notice and by extension, my cousin as well.

OP’s aunt also said she’s jealous that her cousin got married before her, which she claims she “never even thought of.”

She gave a lengthy lecture and asked if I hate to see her daughter happy and whether I pulled this stunt because my “blind” cousin got married before me. I was like woah calm down none of this was true. I just wore my favorite color and didn’t do it because my cousin is blind and wouldn’t notice. And married before me? I never thought of that.

I argued with my aunt for trying to dictate what I wear but she defended herself saying I was a guest and should have respected the bride. I left feeling very upset and exhausted from that encounter.

Her own boyfriend even sided with the family…

My boyfriend said he believed I used the fact that my cousin is blind to wear white but this didn’t fly with her family. He pulled the “I told you so” line and said I just made my family hate with that stunt.

Even though he knows that I always wear white but he warned me that if my cousin finds out there’s going to be some issues. He suggested I get ready to apologize but I really see no reason to apologize since I chose to wear a comfortable color that I feel confident in.

So she wants to know, “AITA for wearing white at my blind cousin’s wedding?”

After hearing the full story, most of Reddit seems to agree with the OP’s aunt and family… 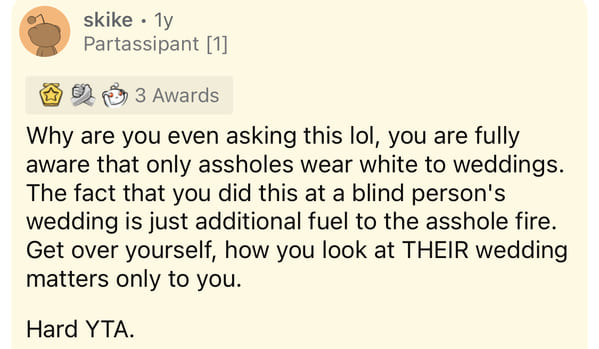 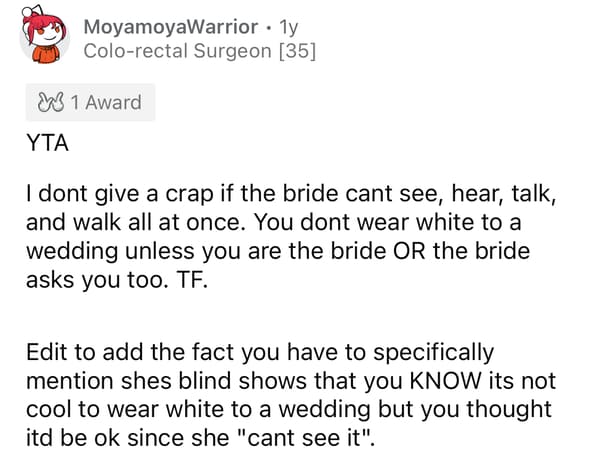 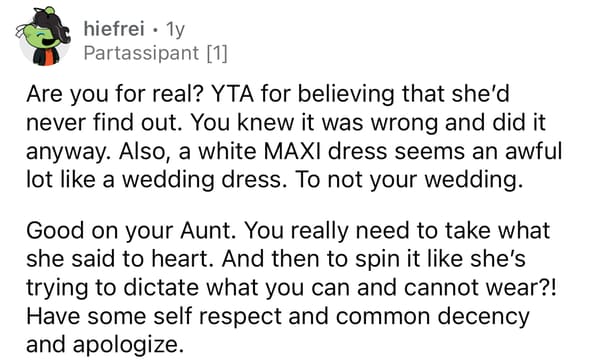 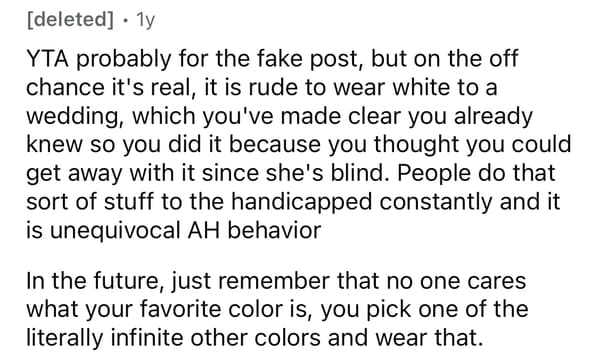 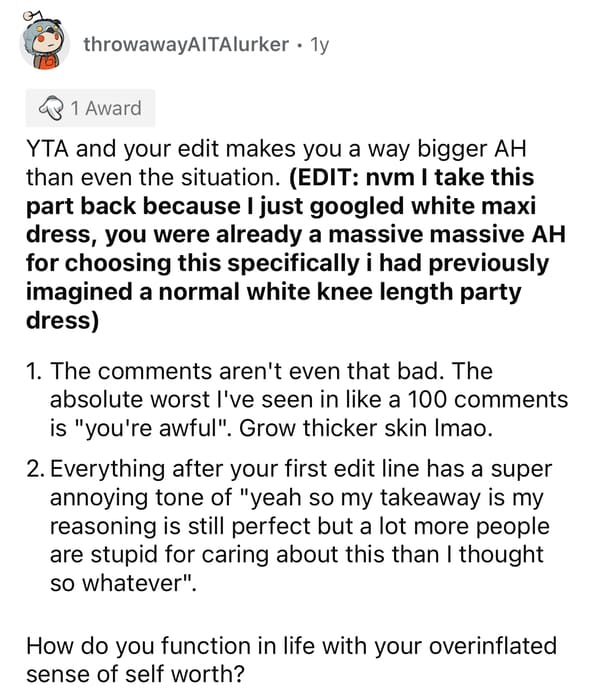 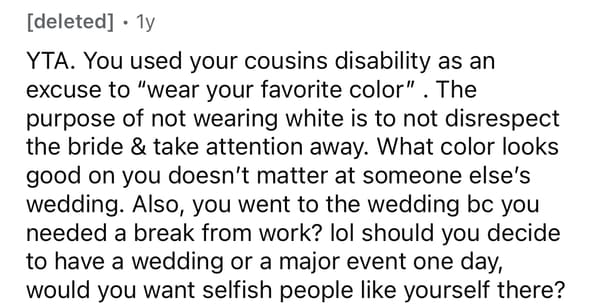 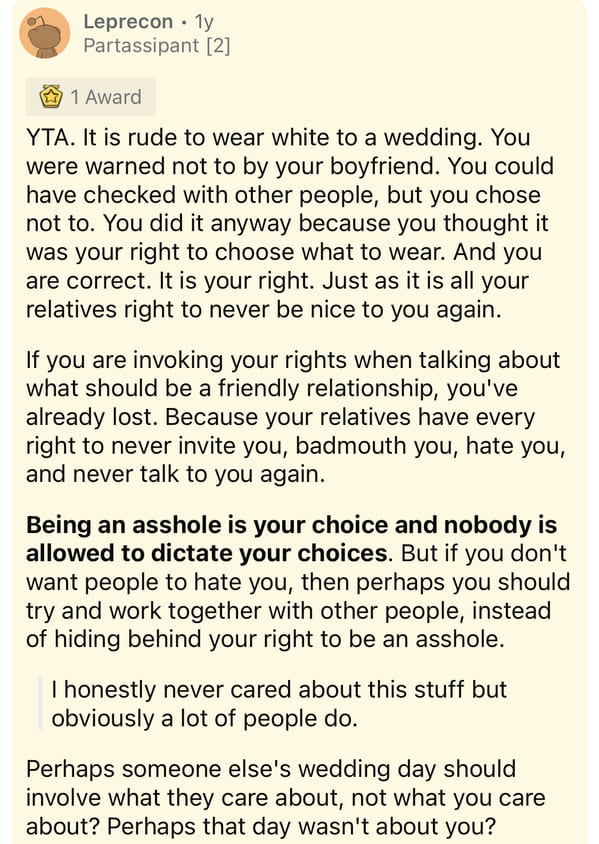