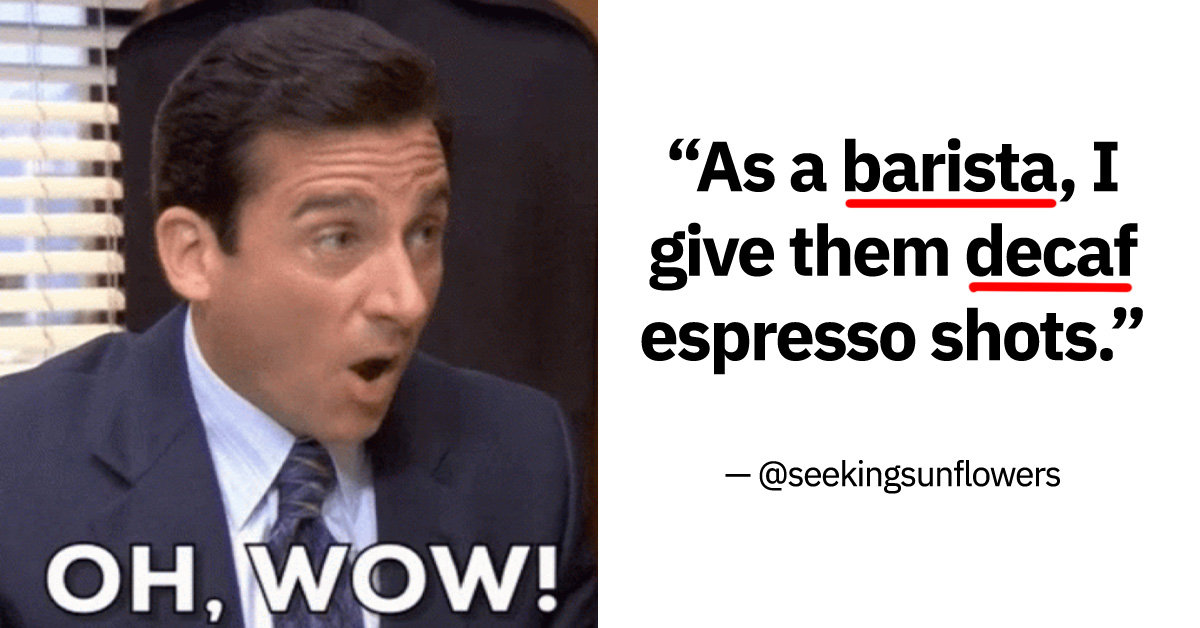 Customer service is a thankless job. They’re on the front lines dealing with Karens every day. Sure, there are plenty of positive interactions, but the bad ones tend to stay with you the longest.

I learned that if you’re nice to employees they’ll usually go the extra mile, or at least not do the things people are sharing on TikTok, and in this BuzzFeed article

Employees from various industries are sharing exactly what they do to get back at rude customers, and you may want to keep this in mind the next time you go to Starbucks. Or, anywhere for that matter.

Here are some of the best responses

“I work as a house cleaner and a lady was rude, so I used her tissues to clean her toilet even though she made me clean the whole house with two dirty rags.”

“Worked at a movie theater in college. Rude customer equals cup filled to the brim with ice before the soda, and broken popcorn kernels from the bottom of the bin.”

“I worked at a nail salon. If one of the customers was complaining about the wait, I would use as little glue as possible on their fake nails.”

“As a server, sometimes when rude customers ask for butter, I give them cold butter, even though I have room temperature butter because I know the cold butter will rip up their bread.”

“I used to work at airport security. The assholes always got their bags pulled for a full search.”

“I under-blend their smoothies so the little chunks block their straws.”

“As a server, I always gave the senior discount to women — usually in their 40s or 50s — who were being rude. They couldn’t complain because they wanted the discount, but you could see in their eyes that I just ruined their day.”

“As a deli worker, when a customer is being a Karen, I’ll squish the cheese together after I slice it so it’s impossible to separate later.”

“As a barista, I give them decaf espresso shots.”

“I work in a hotel. Late-arrival guests didn’t tip when I helped them with their luggage, so I phoned them in the middle of the night.”

“As a flight attendant, for rude customers, I book their airplane seat on a 10-hour flight next to the bathroom.”

“Shoutout to all the servers. For rude customers, we crop-dust — especially if it’s busy and loud and the music’s going and they definitely won’t hear you. We crop-dust.”

“I worked for a car rental company. Moving is stressful, so people were always stressed out. Most of the time, people were fine. But sometimes they would say, for example, ‘I’m moving from Sacramento, California, to El Paso, Texas.’ So I’d say, ‘OK, that’s a five-day trip.’ Some people would say, ‘No, I can do that trip in three days, so only charge me for three days.’ These numbers are based on safely driving eight hours a day — that’s how we want you to drive the equipment. If they kept going and were rude and insulting, I’d say, ‘OK, you’re right. Are you ready for your confirmation number?’ Then I’d rattle off eight random numbers, and they wouldn’t have a moving truck that day.”

“I worked at a discount grocery store. There were a bunch of rude customers — I had people even throw food at me and laugh about it. I had to ring up every single thing manually. Basically, if they were rude to me, if it was 99 cents, I’d ring it up as $2.99. The receipts were so long that they didn’t check. I wound up charging them $30 to $40 more just for how rude they were.”

“I work in retail, and if you’re even moderately polite, I’m the most courteous, professional, and helpful person I can be. You don’t have to be overly nice — just basic respect and decency. As soon as that line is crossed and you get rude with me, the customer service persona drops and you get the silent treatment. I won’t ask my usual questions, so if you forget to type in your rewards card number, that’s on you, and I no longer care if you want your receipt or a bag — you’re getting it, even if you’re just getting a pack of gum.”

“As a bank teller, I give rude customers the smallest denominations possible, sneak a $2 bill in, give you some really dirty coins, or give you some of my mutilated cash. Nice customers get the brand-new bills and shiny coins!”

“I was working at the hotel bar. This one guy was just so rude and a huge asshole. So when his card declined, I went back to the table and said it loud enough for everyone to hear.”