Redditor u/Dansowaru posted a screenshot to the subreddit r/insanepeoplefacebook. The screenshot is from another subreddit called r/unpopularopinion, which is where people post unpopular opinions they have and get them supported or dragged, depending on the readers. It’s kind of a funny sub, because people often get downvoted even though the whole point is that these shared opinions are unpopular? Anyway, this opinion goes beyond unpopular to unhygienic. 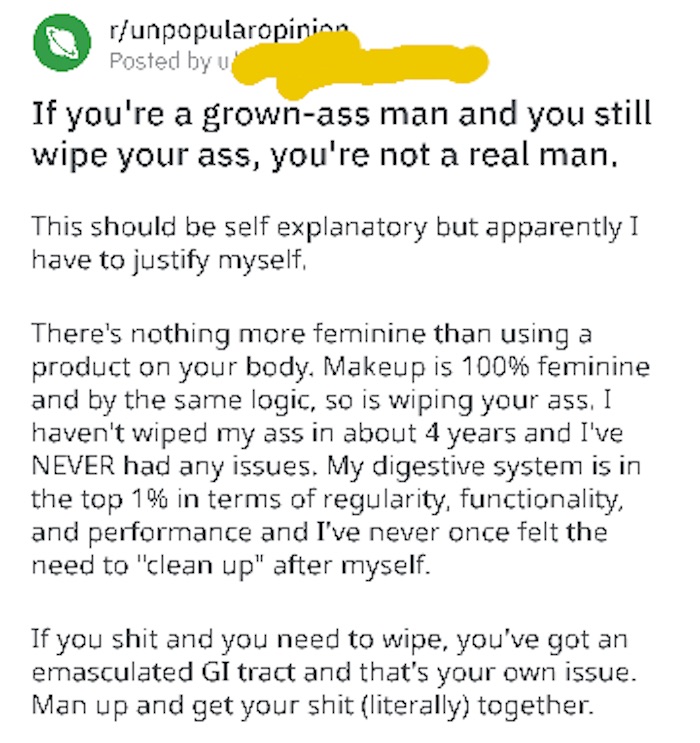 If you’re a grown-ass man and you still wipe your ass, you’re not a real man.

This should be self explanatory but apparently I have to justify myself.

There’s nothing more feminine than using a product on your body. Makeup is 100% feminine and by the same logic, so is wiping your ass. I haven’t wiped my ass in about 4 years and I’ve NEVER has any issues. My digestive system is in the top 1% in terms of regularity, functionality and performance andI’ve ever once felt the need to “clean up” after myself.

If you shit and you need to wipe, you’ve got an emasculated GI tract and that’s your own issue. Man up and get your shit (literally) together.

Is toilet paper a product in the same way make up is? One removes matter, the other applies it. Also, wipe your ass, you troglodyte!

Many of the commenters in r/insanepeoplefacebook quickly pointed out that this particular opinion is copypasta, meaning it’s a disgusting idea that gets shared a lot on the internet, usually with the exact same wording. That means the person who shared this idea is probably a troll. HOWEVER, it turns out that this is not such an unbelievable concept. Apparently, there is a small (but not small enough) group of men out there who believe any contact with their butt is “gay” or otherwise find wiping unnecessary. 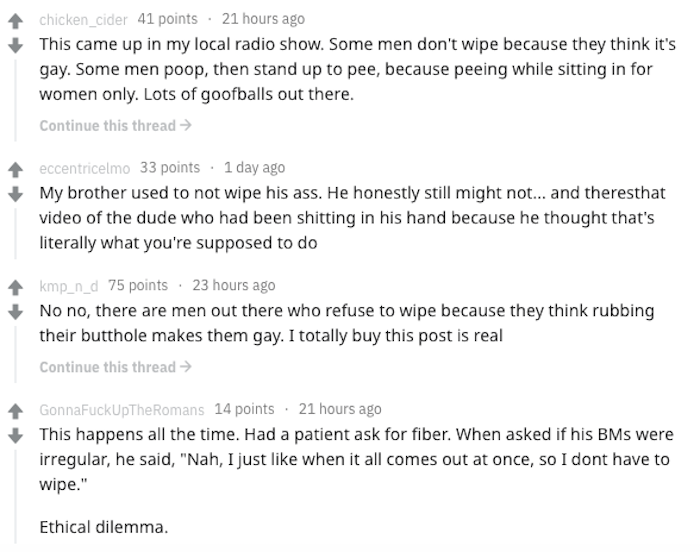 Funnily enough, one Redditor claimed that he takes fiber and it does result in a poop so clean and neat he doesn’t need to wipe! But he still does, for the sake of common decency.

The best troll posts are the ones that seem borderline believable. The fact that this one does touch on reality is painting a picture of reality I don’t want to see. If anyone reading this is skipping the wipe, please know you are copypasta satire. And nasty.