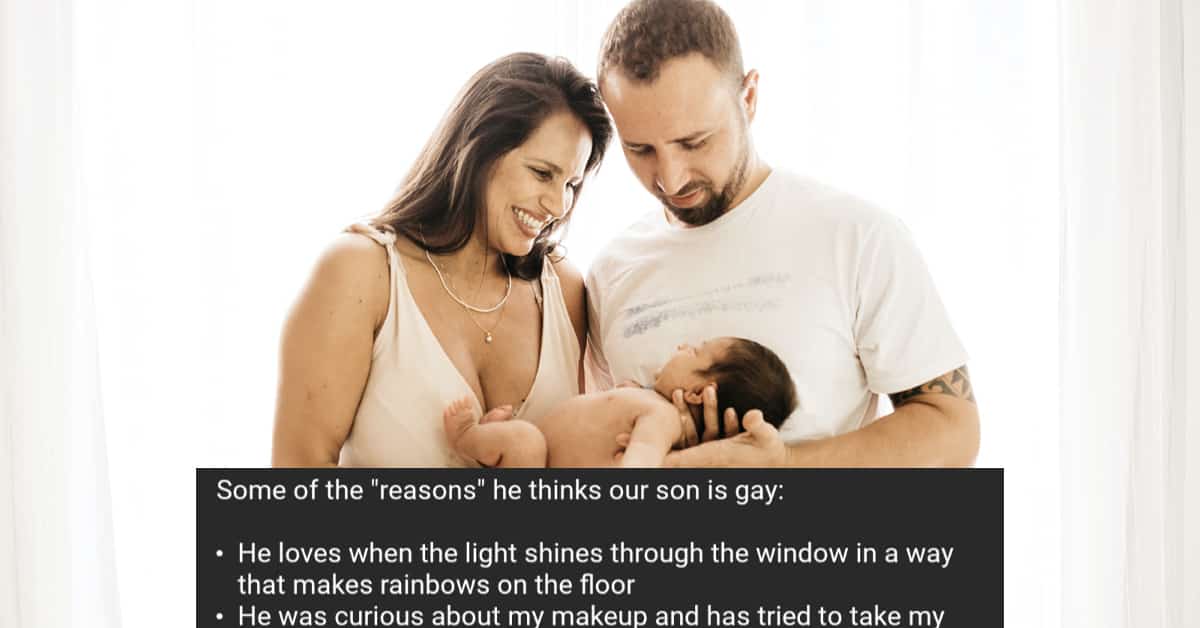 One woman posted on Reddit’s relationship subreddit asking for advice because her husband is convinced their one-year-old son is gay, based on his normal infant likes and dislikes.

The woman posted numerous examples of things her baby son likes that her husband thinks makes him gay, including rainbows, bananas, and books.

The woman said whenever her husband brings up their son’s sexuality she disagrees with him, and her patience is wearing thin.

“I’ve also told him little kids don’t even have a sexuality yet,” OP writes. “Our son is just over a year old. He’s barely walking and talking! And besides you never can be certain what a kid will grow up to be. There are no definite ‘signs’.”

The responses on both Reddit and Twitter were strongly “anti-husband.” Many thought it was weird he thought his son’s actions were sexual in any way.

“Why is he even putting sexuality and your baby together in his thoughts?” one Reddit user questioned. “That is messed up. Maybe he has some deeper issues going on.”

I also prefer her to her husband

“Truthfully this is very worrying. It sounds like the husband is going to be constantly checking for and reinforcing ‘appropriate’ masculine behavior as the child grows up, which is going to be extremely damaging,” one Twitter user said.

I want to make a joke, but truthfully this is very worrying. It sounds like the husband is going to be constantly checking for & reinforcing “appropriate” masculine behavior as the child grows up, which is going to be extremely damaging.

fellas is it gay to be a baby?

Many readers thought the husband was homophobic, and has just been good about hiding it until this point.

“I’d say your husband is probably homophobic, but hides it,” one Reddit user said. “You have LGBT+ friends, that doesn’t matter tbh, he can be fine with them, but when it’s his family and his life it’s different. If he didn’t care and would love your son anyway, why is he so obsessed with it?”

heteronormativity is one hell of a drug pic.twitter.com/oFJQrzJx07

but in an seriousness your partner sexualizing and preemptively bullying your baby is an entire parade’s worth of red flags pic.twitter.com/IZs1nPVDvl

And many users recommended therapy to get to the root of the issue and ensure OP’s son is raised in a loving and accepting way.

“I think it’s time for some professional intervention,” one Reddit user wrote. “Either sit down with the family doctor and discuss child development and/or some sort of family therapy. If he’s critical now, he’ll be critical later and that will definitely harm your child as he grows older.”

“I definitely agree I need to figure out how to make him stop this before my son is old enough to understand it,” OP responded, and said she was totally blindsided by her husband’s behavior.

he needs to see a therapist. it’s some internal shit that he’s dealing wit within himself & he taking it out on his child, who can barely even talk yet. weird shit. this is one of the many examples of why mfs don’t need kids https://t.co/iPNxs3HZXw