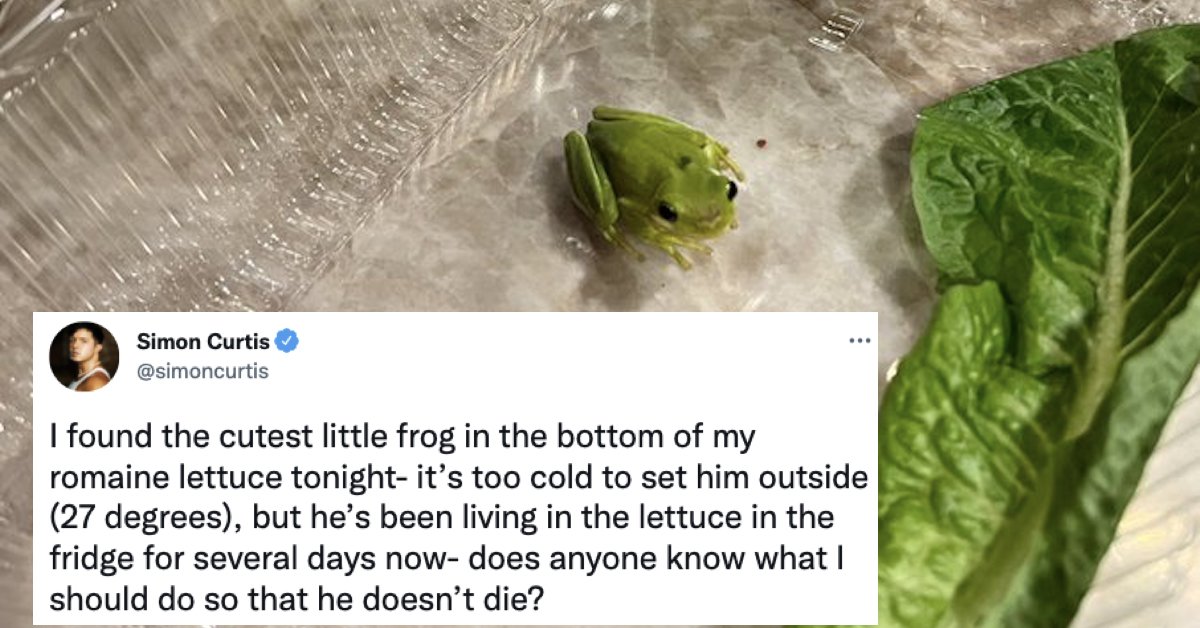 Lettuce in my fridge has a special way of being what I’m “going to make for dinner tomorrow,” every day until it’s wilted and gross.

You’re probably like me, but this isn’t a story about wilted lettuce. It’s something so much more. Buckle up.

Musician Simon Curtis reached into his fridge to grab some romaine lettuce and ended up on an enchanted adventure instead. Buried in the leaves of his future salad was a tiny green tree frog, and thankfully, it was still alive.

Curtis started tweeting about the frog, not sure what to do with him.

Not only was it freezing outside, there are some environmental concerns when it comes to releasing wild animals.

So, while he tried to figure out what to do, Curtis made the frog and makeshift terrarium, gave him a name, and started tweeting about the situation. The Twitter world was absolutely delighted to meet Tony the Tree Frog.

It’s not uncommon for living creatures to get sucked into our food, and make it all the way into the packaging, especially when it’s the same color as the food. But Tony is also an unusually wily little frog, and escaped over and over and over again.

Luckily, Curtis found him every time, whether he was somehow high up on a doorframe, or covered in dust and crammed in between a bunch of shampoo bottles.

The internet was enthralled by Tony’s saga, and a bunch of wildlife experts weighed in on what the best thing to do for Tony was. Several people helped Curtis set up a terrarium that Tony could live in and hopefully not escape from.

He added pebbles, lettuce, and a log to a tight container for Tony and fed him some worms, which seemed to make him much happier about captivity.

Eventually, Curtis confirmed that Tony should stay with him, to prevent him potentially spreading some sort of disease to the local tree frog populace. Though he would have liked to release Tony to a life of frog freedom, it was the best solution for the ecosystem.