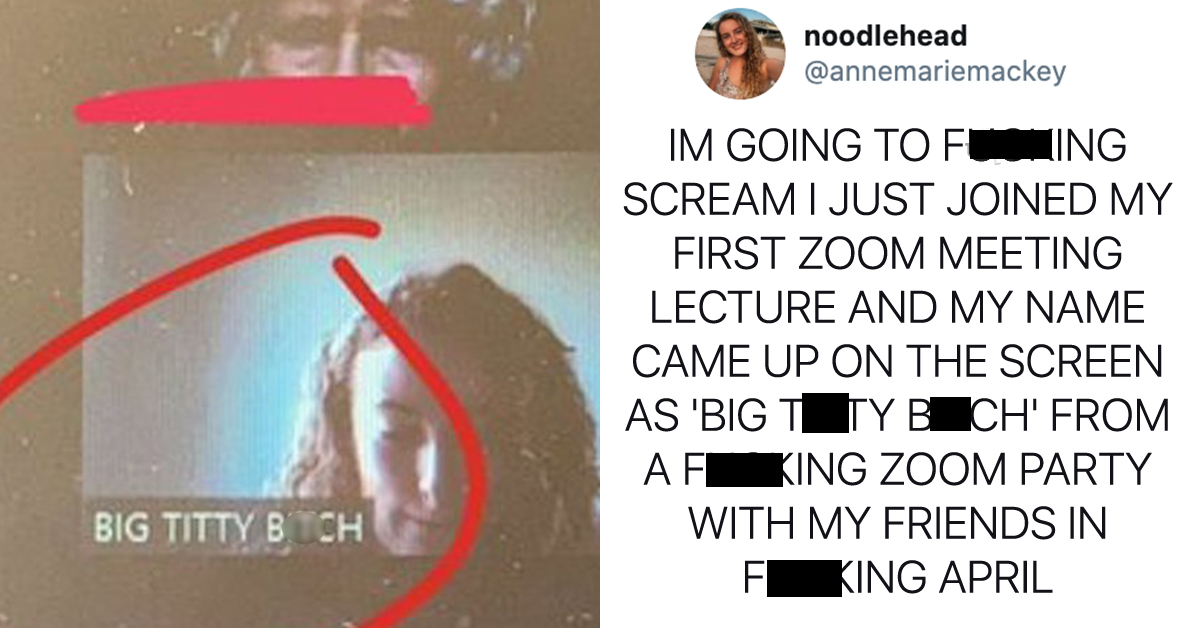 There’s definitely a learning curve to learning on Zoom. Most people in college have learned to show up to class with pants on, but many of us are still getting familiar with having a camera looking into our bedrooms. Zoom fails, accidents, and weird mishaps are common and it doesn’t seem like any of us are going to get through this without some kind of embarrassment.

Twitter user @annemariemackey has just gone through hers. She posted about it on Twitter, writing in yelling capslock:

“IM GOING TO F*CKING SCREAM I JUST JOINED MY FIRST ZOOM MEETING LECTURE AND MY NAME CAME UP ON THE SCREEN AS ‘BIG T*TTY B*TCH’ FROM A F*CKING ZOOM PARTY WITH MY FRIENDS IN F*CKING APRIL.”

There was also photo evidence from a friend on the Zoom meeting who was watching Big T*tty B*tch make a grand entrance: 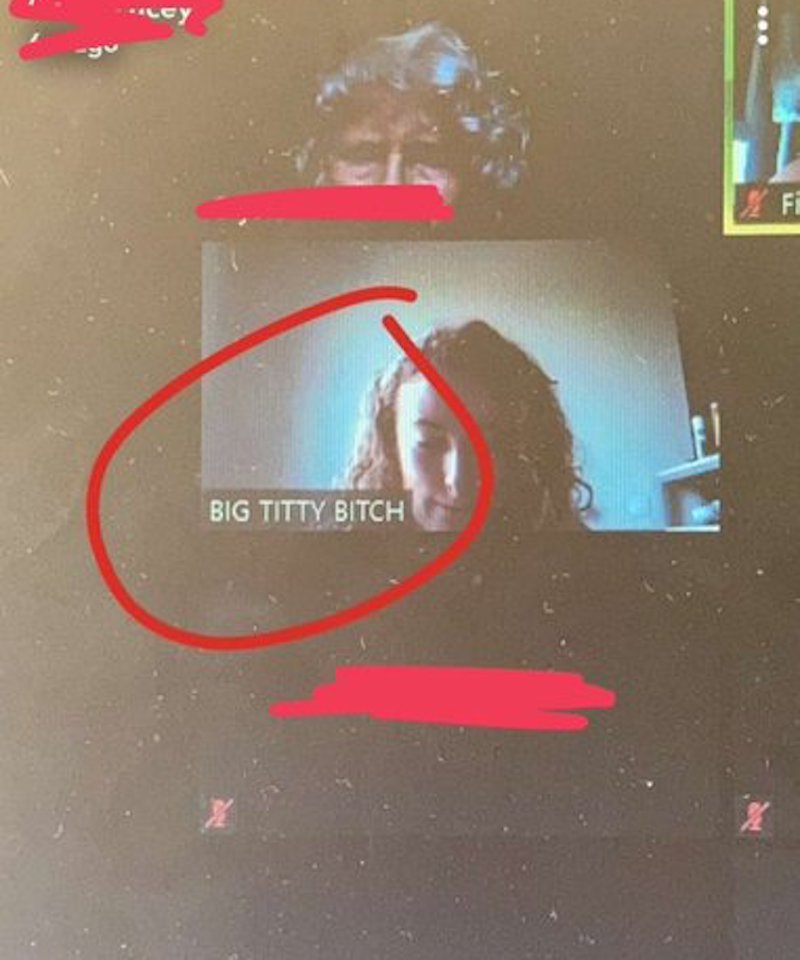 I’m curious is that the moment before or after they realized what their Zoom name read.

BTB isn’t alone in this type of mishap. People started sharing their own stories of inappropriate names showing up in classrooms, meetings, and pretty much anywhere they absolutely did not want them to be showing up. There were also accidental Zoom backgrounds and of course mistakenly turning themselves into inanimate objects with eyes, and don’t forget not checking if “mute” is active on your mic before cursing someone out

I feel like I need to add that my 13 yo had been told to get up like 3 times already and was napping between classes and I was at my wits end. 🤣😂

Luckily I’m responsible and logged in before the kids so none of them seen it, but when the teacher asked I told her I was on a Christmas tree farm…….. – __- she didn’t believe me

I once joined a work meeting with as my background. But with my direct team this isn’t new. But this was hilarious in the larger 100+ zooms pic.twitter.com/mhaYNyeXoy

My mom interviewed someone for a job who can into the zoom as Dr. Thick Dick

…he did not get hired lmao

Contender for the best short story ever 🤣

Couldn’t join a class and for the life of me I couldn’t understand why? Teachers only let in students with their real names on zoom. I had “8=========D” as my name from months ago 😬big dumbass energy

Couldn’t join a class and for the life of me I couldn’t understand why? Teachers only let in students with their real names on zoom. I had “8=========D” as my name from months ago 😬big dumbass energy

I forgot to take off the overlay I added when I was talking to my friend in may when I had an interview in June pic.twitter.com/QhV5eDZo73

My toddler joined her dance class as “Phatty McBigcock courtesy of my husband drinking with his buddies over zoom. pic.twitter.com/Z64KUAloy5

My kiddo (she’s 8) decided to try and join her class meeting with the name “I hate my life” leading to a fun call from the teacher, school nurse, guidance counselor, and school social worker.

She was just angry bc the milk had gone bad and she couldn’t have her cereal.

Similarly thought I was muted and after someone finished responding to a question about an agenda item I clearly exclaimed “Well that’s shit!”

If you’re reading this, take it as a sign to check all your Zoom settings right now and never ever mess with them at Zoom Happy Hour.