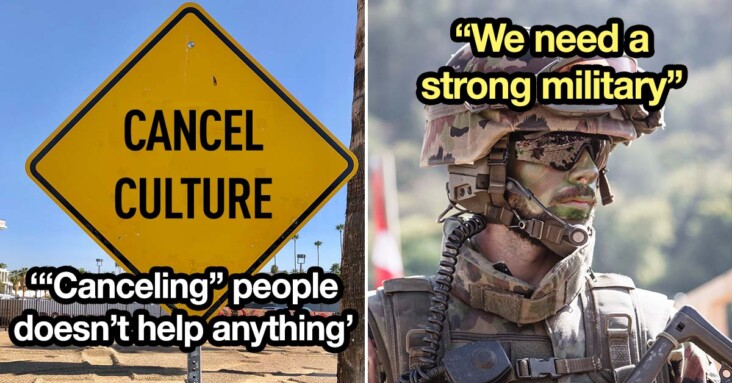 Does it ever feel like in order to declare yourself part of a political party, you have to agree with everything they align themselves with? Some people do, but others have beliefs or ideas that don’t always fit neatly in a box.

On Reddit, liberals and those on the left are sharing what they believe is their most conservative viewpoints.

These opinions that don’t necessarily align with their political affiliation, it’s kind of refreshing.

“Very much on the left/liberal, but I believe that people are responsible for their own triggers rather than everyone around them needing to watch every word they say. I think we coddle people too much sometimes.”

“Liberals tear each other apart for not being perfect instead of helping each other try to learn. I’m not at all here for that. If you see someone you know acting poorly, having a real conversation about why you feel that’s hurtful is going to stick better than shaming.”

“Just because you don’t post on social media about political/social issues doesn’t mean you don’t care about them. I saw a lot of not-so-subtle digs on social media a while back about the lack of posting a particular screenshot making you ‘part of the problem.’ It irks me because it ignores work, donations, etc people do/make on the down-low for causes they care about without making a show about it online. It’s also a one-dimensional view: that people should be on board with whatever the trending issue is while ignoring other ones out there that deserve our time and effort. Social, racial, climate justice; they’re all important and they don’t (edit: shouldn’t) vary in import based on what’s trending.”

“I think there should be more trade schools and apprenticeships. That probably would seem conservative to some people, but many smart people sometimes do not fit in well at college.” — Nearby_Act3260

“It’s perfectly ok for sex to be a private thing. I’m sex-positive, I want proper sex education but the trend of sexualizing EVERYTHING and being out there and explicit about what and how you like to f*ck could be toned down.”

“Some criminals can not be rehabilitated. They should stay in prison permanently. Also, that certain crimes need much harsher sentences. Please be aware I live in New Zealand, not America. People don’t go to jail here for 99 years for having some drugs.”

“I don’t know if this is necessarily conservative, but I’m somewhat pro nuclear energy. I think harnessing nuclear energy could help slow the speed of climate change. It’s obviously not great since it still produces terrible waste, but I don’t think it’s as bad as fossil fuels and there’s a lot of room for growth and improvement in nuclear energy. Eco nuts who think we can solve everything with only wind and solar power aren’t being realistic.” — squawk_kwauqs

8. Staying At Home With The Kids

“As a woman who has worked her entire life and cried when I had to leave my 1st baby and go back to work. I agree I would have loved to stay home and mind them. Every month I would do a calculation to see what we could give up so it could happen and it just was never a possibility. The work moms made it worse telling me I was letting down women’s rights for wanting to stay at home like I was supporting the patriarchy for missing my kids. I’m in no.3 now and we finally worked out a way I can stay home for 2.5 years. Maybe we can work something else out after it but I’ll take what i can get.” — fiestymcknickers·5h

“That the US cable media system is complete garbage on literally all sides and every single news station propagates so much divisive bullsh*t for the express purpose of wasting everyone’s time by fighting instead of dealing with issues. This is conservative only because a lot of fellow liberals seem to think CNN is somehow not also guilty of this.” — TheKingofHats007

“As a gay man, I wish LGBT people weren’t treated as this special unique thing. Seeing rainbows and advertisements everywhere dedicated to people born like me has never made me feel normal. As a young child questioning myself, seeing all the pandering made me feel scared about being something ‘different’ from my peers, even when it wasn’t homophobic or biased (of course this is just my personal view). Like there’s nothing about being born gay or trans that requires the endless media and virtue signaling. Gay Pride used to be about spreading awareness of discrimination and bigotry, and standing up for our rights. Now it’s a giant pat-me-on-the-back-cuz-im-gay parade, fueled by corporations that often earn millions from countries that genuinely see us as inhuman. We don’t need another Gay Pride in New York or LA, we need to reach the many small communities in the US where LGBT kids live in paranoia because they have no comrades or allies. We should erase this idea that your child is put into a social category different from you because of who they like or how they act.” — armani_vibes

“I think ppl try too hard to be politically correct on everything but they don’t actually understand what they’re talking about, I’d rather people be blatantly ignorant than convince themselves they’re not by posting about it on Instagram.” — East_Establishment81

“Latinx is the dumbest thing I’ve ever heard. My company uses it, my liberal friends use it, and honestly I don’t care — idc if you identify as that. Identify however you want! Just do not shove that label onto me. Latino culture has multiple, deep-rooted, intense issues with machismo. The o/a at the end of latin, is not one of them (clearly, IMO).” — croix_v

“Worries about ‘cultural appropriation’ are bullshit at least half the time. I understand if you don’t want white girls dressing up like geishas because they think it’s funny, but musicians and artists have been stealing ideas from everywhere forever and that’s how we wound up with jazz and hip hop and other great things. Critics who tell you how to do art often don’t do art very well.” —wordboydave

“Plenty of people, mainly celebrities, have been cancelled because of tweets 5-10 years ago saying something racist, homophobic, etc. Now don’t get me wrong, it’s wrong to say that stuff but can we all agree that we lowkey did that too? Times change, people can change too. Do I think Kevin Hart realizes the mistake he made when he made that tweet? I’d think so, because I would too. There’s too many people on the internet under the guise of anonymity or just plain elitist attitude that think criticizing someone else for something they said should mean their entire life gets turned upside down. What happened to people changing? Humans change and should have opportunities to change. I don’t think we should absolve people of consequences, but the consequences are so harsh that we’ve hyper polarized society into groups of people who have to fear what they say, and those who have no fear at all spouting their hate. Both are bad.”

“I’m liberal af and I like having my flag visible, but people tend to think I swing conservative.” — AllOkayNamesAreTaken

“I believe a lot of liberals are fighting stupid battles, while they’re fighting for their right to not be offended, proper pro-nouns, cancel culture and other causes, they’re getting fucked by the right where it matters, tax code, increasing economic inequality, etc.” — iwbia123

Left-winger. I think we have started to expect an unreasonable level of moral purity from people, and our attempts to make everything PC is akin to the war on drugs in that it does far more hurt than good. Nuance has also been lost, and many on the left have resorted to black-and-white thinking. Calling people out or canceling them doesn’t help anyone, and I can’t think of anything more dreary than a fully-sanitized world.”