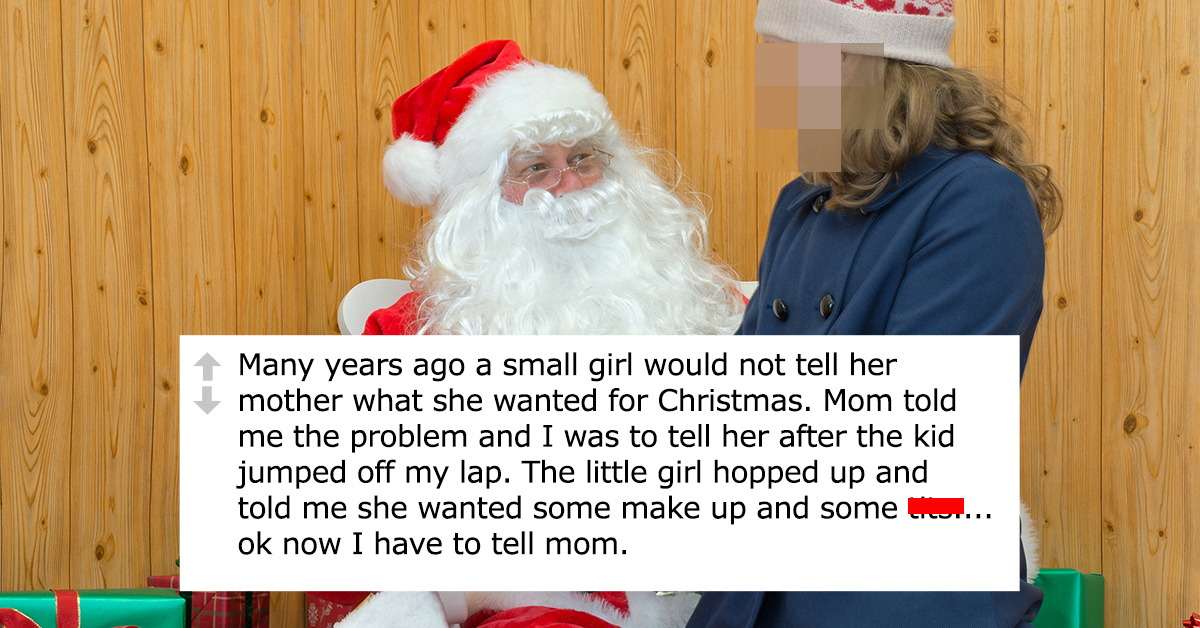 But there are some presents parents can’t deliver, as was made clear in this r/AskReddit thread started by u/DoubleRemand. The question was, “Mall Santas of Reddit, what is the weirdest thing a kid asked for Christmas?”

Not that many actual mall Santas chimed in, maybe because there are fewer of those on Reddit than you would expect. But many people have been elves,

Mrs. Claus, a weird child themselves, or a horrified parent, watching their kid horrify a man in a red suit and fake beard. Below are some of the strangest requests folks on Reddit have heard from the mouths of babes to Santa’s ear. That poor man.

Not a Santa, but I have been a Mrs. Claus for the last few years and I always ask the kids what they want while we do our crafts. My favorite was this 4-5 year old girl that told me she wanted “one of those loud horns”. She made a gesture like she was using those canned air horns and she made a little horn sound. She said she wants to use it to wake up her baby brother when he naps in the daytime so he “knows what it’s like.” —Candy_Acid

My 3 year old son asked Santa once for “a baby rhino” Santa told him that “The baby rhinos mama would be very sad to lose her baby though” Then my son said, “okay, well I’ll take the mama too, maybe she can sleep in my moms bed” —masochisticminx

After waiting two hours in line my daughter asked Santa for a hot dog. —Simulated_Narwhal

Not a mall santa my friend was one. He said that the weirdest thing he heard from a kid was a husband for his mom. —Angelbot1000

For me to “stop upholding this charade” —CountVonBenning

Not me but my dad. A kid asked for his moms milk. He was like 7 —supermimipvp

I know the weirdest thing I asked for was a pen that could write like a pen, pencil, marker, and crayon. I’d never seen one but was sure Santa could make it. I got a 4 color pen instead. —blue4t

When I was 5 years old (49 years ago) I asked a Santa in JC Penny’s at the time for a real lawn mower, the kind that my dad uses. They had me hold a microphone up to my mouth. My answer (along with every other kid I presume) was broadcast throughout the whole store. I can still hear the laughter from the adults. —Eye_Doc_Photog

I once asked Santa for my parents to get a divorce. —AllLinesDown

A piece of toast. —deepsoulfunk

My uncle was a Santa and he told me that one year a kid asked for a coffee maker because he wanted to start his own Starbucks coffee stand instead of a lemonade stand. Apparently business was not very good as a lemonade stand but he noticed a lot of adults drink coffee, so he’d make coffee. That kid is probably a millionaire now. —The_Calico_Jack

So literally last night we took my kids to see Santa and when asked what she wants for Christmas she says, “A Surprise.” Santa was so surprised he didn’t know what to say. —Wald0Found

Many years ago a small girl would not tell her mother what she wanted for Christmas. Mom told me the problem and I was to tell her after the kid jumped off my lap. The little girl hopped up and told me she wanted some make up and some tits…ok now I have to tell mom. —LPGeoteacher

When he was feeling better my FIL looked just like a real Santa. I used to mess with him around Christmas when we were out and about with a quick “Rudolf needs to get back to the pole, we need to hurry” I got a lot of really great looks from kids.

The best was a shy little girl that came up and asked for some specific doll. Without missing a beat he says “I’m not sure what the heck that is but I’ll have Legolas look into it” he always acted grumpy about but we all know he loved every second. —hipcatcoolcap

Was a Santa at a party last week. A kid asked for a whistle that she could blow at night to wake her mom up and scare her when she was sleeping. I said “No, that would put you on the Naughty list, let your mom sleep you little gremlin.” Mom laughed. —VictorCrowne

Not the weirdest, but my favorite thing I have heard a kid ask for. At my daughters preschool, there was a Santa. Kids were asking for the usual things, like toys and unicorns. One little girl goes up. You can tell she is thinking really hard. She asks for 2 rolls of tape. Dream big kid! —rothmaniac

Not a mall Santa but once my sister asked Santa if she could have a horses head and an ice cream cone. She explained that she was gonna paint the ice cream cone the colour of the horse, stick it on, mount the horses head to the wall and tell her friends she killed a unicorn. She doesn’t remember. —Navy-H

Not a mall Santa but an elf at a charity event. I over heard a kid asking Santa for a real life Pokémon, not a plushie or a Pokémon themed toy, a living Pokémon. I’m sure the kid was sat there for about five minutes making sure Santa fully understood the request. —RokoPlayzYT

Reindeer eggs so he could start his own franchise. —v00g

My sister asked Santa for “Black Men” for Christmas. She meant “Men in Black.”—W0nderfulandstrange

I was an assistant manager for a mall Santa with Noerr Programs. There was a special needs 20-something black guy that would come by nearly every day. He easily weighed more than 250 pounds so we did eventually convince him to sit next to Santa instead of on his lap. Every time he had to remind Santa what he wanted for Christmas. His list was Home Alone on DVD, Straight Outta Compton on DVD, and Prince’s 1999 album on CD. Santa was awesome and brought him the Prince CD a few days before Christmas.—sambones

I’m not a mall santa, but I heard this kid say: sex doll you should have seen his parents face.—TheBionicleApple