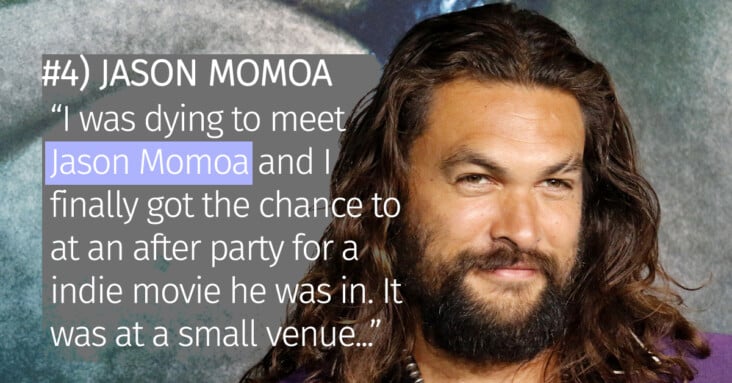 “Never meet your heroes” is what most people would say about meeting admired celebrities. But, take it from me (a comedian who’s met countless famous people): it’s better to not have any heroes. It sounds depressing, I know. Well, it is depressing. I’m depressed. Oh, boy.

I kid, of course. The reason a number of celebs seem down-to-earth when people meet them is that they are! They live normal lives. That’s why most of my celebrity interactions are boring. I met Patrick Stewart in a bookstore once and we talked about books and plays for a few minutes, and then he left. Exciting stuff. 5-stars. Would meet again.

Other celebs, though, I’d be terrified to meet. The late Prince? Chappelle? No, thank you. The people sharing stories below realized in a single interaction that their heroes were not as nice as they’d hoped.

Take the stories with a grain of salt. These are from random people on the internet, and maybe the celebs were just having a bad day.

People who had bad experiences with their favorite celebrities:

“I was dying to meet Jason Momoa and I finally got the chance to at an after party for a indie movie he was in. It was at a small venue in LA with some bands playing.

Jason walked in and few people started talking to him; once they passed I bought a beer and approached him. I gave him the beer and asked how his night was. He was kinda drunk already from the look of it, but he pounded the beer without saying anything. I wasn’t too sure what to think so I got more to the point and asked if it would be cool to get a pic. He leaned into my face and said, “Tonight isn’t about that. Tonight is about me.” and walked away.

Not even 5 minutes later he was taking pics with some other people across the venue and signing some autographs.

Aquaman owes me a beer damn it.” –Im_inappropriate

“I met one of the artists from ZZ Top at a super nice hotel in Louisville. Wasn’t a big deal to me but was to my cousin.

My cousin asked, “I’m sorry to bother you, but may I get an autograph? I’m a really big fan!”

The one Z replied “Sure thing, let me run up to my room really quickly and get the rest of the guys.”

We watched him go up to the room and waited for a little over an hour. My cousin cried.

Fuck that Z in particular.” –DankeyKang11

“Jerry Lewis. Came to the Children’s Hospital where I was a nurse. He wouldn’t come up to our oncology unit. Wanted us to bring the immunocompromised kids to the lobby so the press would see him meeting the children. Sorry, Jerry I can’t do that. Fuck Jerry Lewis.” –markydsade

“Back in the early 2000’s when Criss Angel was huge I was his biggest fan. He was doing an episode of his show at my moms work cause she was a diver and it was a water stunt. I was 9 years old and I thought everything he did was the real thing. She let me come to work with her and meet him. I waited 2 hours outside the green room for him. He finally came out and walked right into me knocking me over. I’ll never forget how he looked me dead in the eyes knowing he had just knocked me onto the ground and then just walked away. I cried.. Fuck Criss Angel.” –MyOathToMadness

“Paid $75 to take a photo with William Shatner at comic-con. We had sometime because the photographer had some tech issues. I said “it’s nice to meet you”, he responded in the most uninterested whisper “…thank you…”. I thought he didn’t hear me so I tried again and it was like he was on autopilot. Then he yelled at the photographers for having their lights too low, apparently “they need to be much higher so the nerds dont get in the way” –90c87

7. The Cat From Sabrina The Teenage Witch

“I went to an event with “Salem” from Sabrina the Teenage Witch as the special guest when I was like seven. It turns out, there were multiple Salem cat-actors. For some reason, this really devastated me. After that, I’d always try to point out the inaccuracies of the cats within a scene…to make me feel better, my aunt got the producers of Wishbone to write and confirm that Wishbone was a single dog, actually named Soccer. This did make me feel better, and Wishbone is a better show.” –violetmemphisblue

8. Chef Duff from Ace Of Cakes

“Grew up watching Food Network and I’d lie if I didn’t say it instilled a huge love of food and cooking into me. Around the time I had started in the industry the show Ace of Cakes with Chef Duff came on. Seemed like a super chill, relaxed dude. I mean the opening of the show he says he opened a shop with his friends so he could hang out and make cakes. Sets a picture of what this guy is all about right?

So I’m working at a hotel and one of our guests had won the lottery. Like, the most amazing guest we ever had. He ended up ordering a cake from Chef Duff and I saw it on one of our notes for that day’s catering events. Super hyped to see him, hoped to get a picture or something. (If you watch the show, he does these big reveals to the guests, pictures with everyone and is super friendly and personable)

He showed up, no smile, no laughter, nothing. Took over my kitchen for a little while to assemble the last touches on the cake, walked in to the banquet hall, snapped one shot with the customer and was out. I don’t know if he was having a rough day, but it really kinda put a damper on the persona he shows on TV.

Alton Brown was chill though. I liked him.” –Tsukasasoul

“Les Claypool. Was backstage at a Primus show. I don’t get starstruck, went for the quick and not wanting to be a bother ‘Hey Les big fan man!’ ‘Fuck off buddy'” –Gr_enius

“Okay he wasn’t exactly my hero, but I was 10, so the winner of American Idol was pretty fucking cool to me. Taylor Hicks did a tour with the Grease musical cast and I was fortunate enough to meet him afterwards and take a picture. That guy was such an asshole. Wouldn’t let me come near him, refused to acknowledge my existence, acted like this was the last thing in the world he wanted to do. I was star struck so I wasn’t even really asking questions or anything, I just wanted a photo. He then made my mom pay for it. Piece. Of. Shit.” –peacefroggyfrog

“I was with a friend and her boyfriend and we happened to run into Shaun White. They were both huge fans but I really didn’t care that much. My friend walked over and asked for a picture. Shaun threw his arm around her and, without taking off the bandana on his face or his goggles, took a picture with her. Her boyfriend asked for a picture afterwards and Shaun responded with “I only take pictures with the ladies…” and walked off. My friend told us on the way home that Shaun had rested his hand on her breast while her boyfriend snapped the pic.” –corsair1617

“Not my hero but my mom’s hero. Mom is in love with Jon Bon Jovi. She bumped into him (literally) in public a few years back and said “Oh, I’m so sorry.” before realizing who he even was and his response was “You should be.”

Like, what man? An old lady bumps into you accidentally and that is your response??

Did not change her love for him but it sure made me sour. I’ve heard other stories of him being generally a dickhead since but that is my favorite.” –Megnanimous