Movie star and former California governor Arnold Schwarzenegger is a Republican, but on the political spectrum, he’s relatively liberal. By that I mean he is not a mouth-foaming Birther or a Trump-lover and he actually believes climate change is real. In today’s world, that means a lot.

Schwarzenegger can reach a lot of people with his platform who are more conservative and he often tries to share information to the benefit of the world.

On his Facebook page, Schwarzenegger tried to share an episode of Our Planet about trying to retrain miners. He even prefaced it with a message, captured by ebaumsworld.com, about how he did NOT want to fight, writing, “Let’s try something new today. instead of arguing in the comments…Let’s give each other hope.”

Give each other hope? On Facebook? Okay, if you say so.

Of course there were people unhappy with the implication that we should all try to learn something and then have a civil conversation about it afterward.

“Stick to lifting and making movies,” wrote random man Thomas Censullo. “Snowflake is a title you do not want.”

It’s pretty hilarious to call someone like Schwarzenegger a “snowflake” and he seemed to find it funny, too. He took the time to respond, making it clear what he thinks of Censullo without even using any curse words.

“I never mind picking up new titles,” he answered. “Mr. Universe, Mr. Olympia, Terminator, Governor… If you want to call me Snowflake, that’s fine—it would have been a fantastic Mr. Freeze line. But let me give you some advice.”

Uh oh. He continued, “If you’re going to call someone a snowflake because they believe in a different policy than you, you might want to look in the mirror. When you see an idea you disagree with, you can get angry or you can learn. 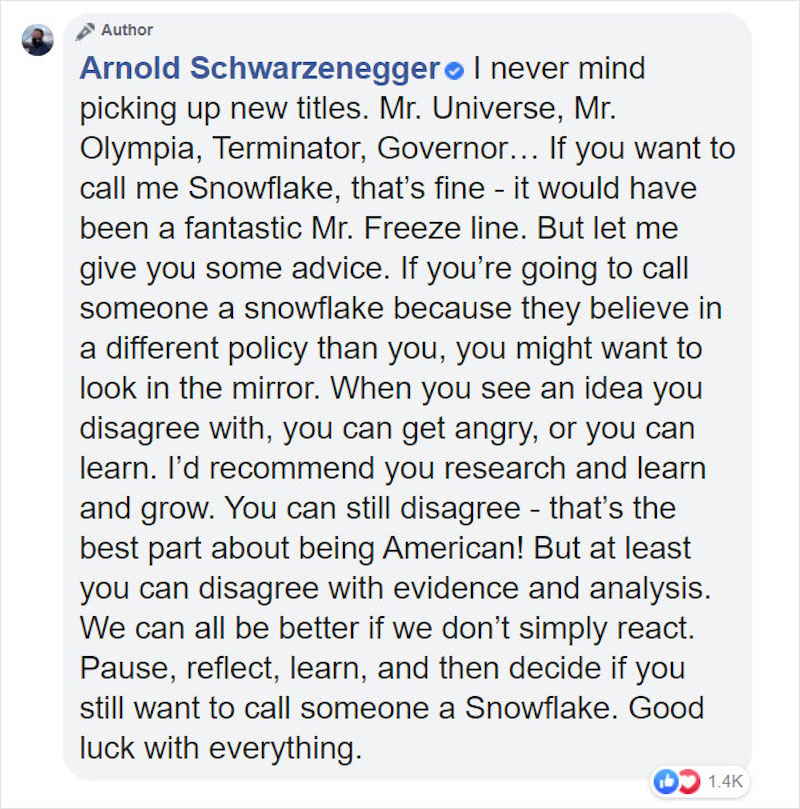 “I’d recommend you research and learn and grow. You can still disagree—that’s the best part about being American! But at least you can disagree with evidence and analysis. We can all be better if we don’t simply react. Pause, reflect, learn, and then decide if you still want to call someone a Snowflake. Good luck with everything.”

What a classy spanking.

Commenters really appreciated this response, because it was both annihilating and thoughtful:

There really isn’t anything weaker than seriously calling someone a snowflake for watching a documentary. Whatever you might think about Arnold Schwarzenegger, you better come at him with something harder than that. He is the Terminator.