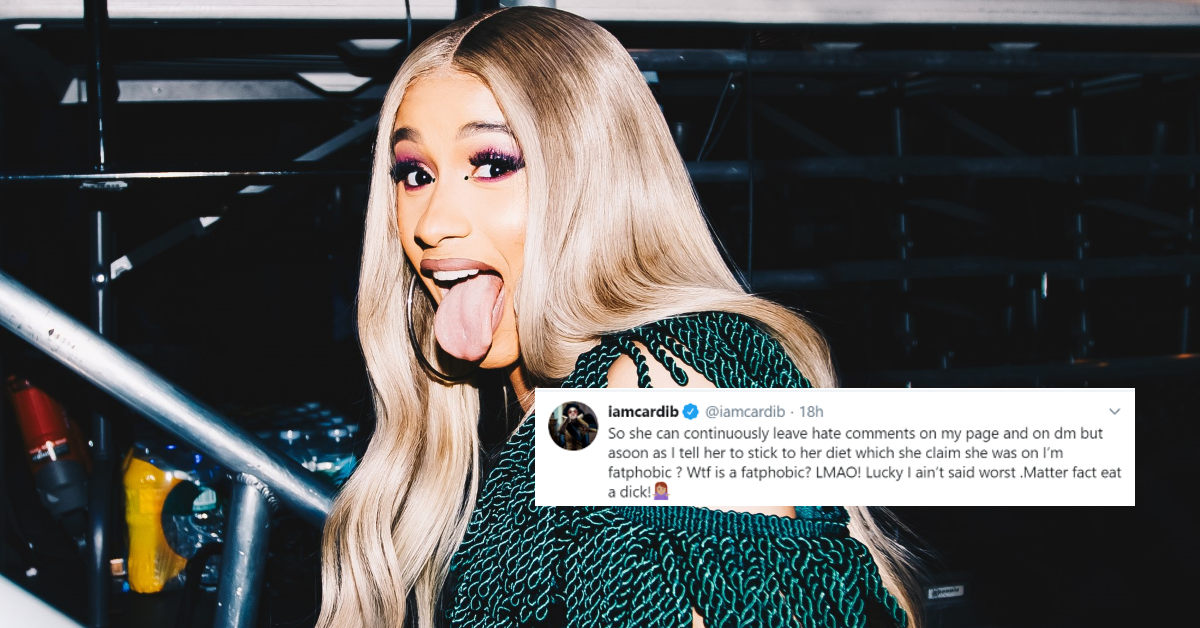 Cardi B has never shied away from saying exactly what she thinks on Instagram, and while this has often generated controversy and criticism, she doesn’t seem to care. It’s refreshing in a way to see someone who unafraid to say exactly what she’s thinking even if sometimes, she probably should really keep her thoughts to herself.

This week, Cardi landed in a bit of hot water after clapping back at an Instagram troll who, according to the artist herself, has been repeatedly harassing her with abusive comments until she just couldn’t take it anymore.

The final straw came in the form of a reply to one of Cardi’s recent posts. 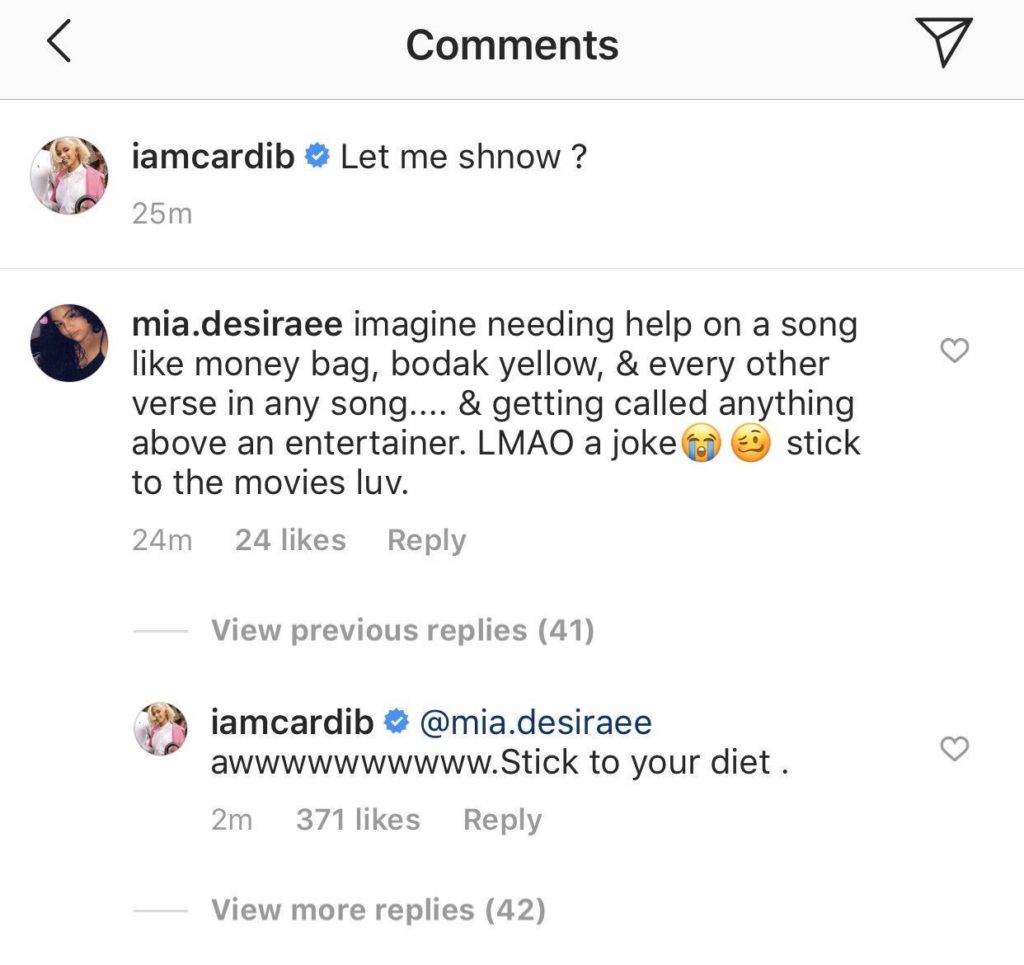 A woman with the username mia.desiraee wrote, “Imagine needing help on a song like ‘Money Bag,’ ‘Bodak Yellow,’ & every other verse in any song… & getting called anything above an entertainer. LMAO a joke. Stick to the movies luv.”

Cardi B posted a screencap of the comment as well as her reply, which simply read, “awwwwwwwww. Stick to your diet.” This caused an immediate backlash online, with many branding Cardi as fatphobic for commenting on the troll’s weight.

Just don’t talk about other’s people bodies. It is so hard to be fat and confident. I understand that she was disrespectful but it doesn’t give you the right to fat-shame her. Also, you have like millions of followers who will bully her and you know it, so don’t play like this

The rapper was unmoved by the criticism, however, insisting that mia.desiraee shouldn’t be surprised by Cardi’s response since she’s been continually harassing the artist on social media for a while.

Cardi further claimed that if the woman didn’t want to be shamed, she shouldn’t have been commenting on Cardi’s social media posts.

So she can continuously leave hate comments on my page and on dm but asoon as I tell her to stick to her diet which she claim she was on I’m fatphobic ? Wtf is a fatphobic? LMAO! Lucky I ain’t said worst .Matter fact eat a dick!🤷🏽‍♀️ https://t.co/qSU8w5SKrU pic.twitter.com/RjkouGZdHp

“So she can continuously leave hate comments on my page and on dm but asoon as I tell her to stick to her diet which she claim she was on I’m fatphobic ? Wtf is a fatphobic? LMAO! Lucky I ain’t said worst .Matter fact eat a dick!” Cardi posted on Twitter.

However, not everyone condemned Cardi’s response, and in fact many fans came out in support of the artist, claiming that trolls online “wanna hit without being hit back.”

This generation wanna hit without being hit back https://t.co/3KEgoNjJ6n

Cardi B will continue to speak her mind, so if you’re going to troll her, you’d better be prepared for the response. Is it mature? Not really. Is it justified? Many would say yes. What does Cardi think? I think we all know the answer to that.

I don’t give one single fuck🤷🏽‍♀️

Bitch, if you block these people who hurt you on social media, it will be healthier and better to prevent things from getting worse. You’re talented and Brazil loves you girl, live your life to the best of your ability and hire someone to block these ridiculous haters for you. ❤️ pic.twitter.com/B41baq6p0h

Sis really though she did something😭 Expose her ma 😂 pic.twitter.com/b4wLxUxvYr