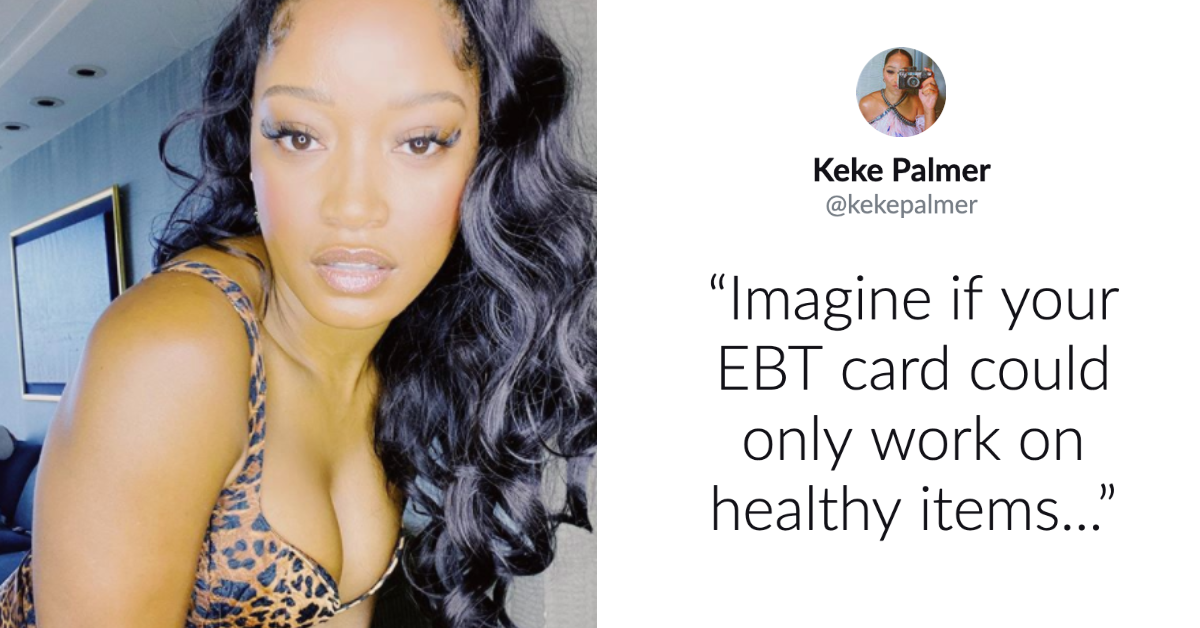 Actress Keke Palmer made some problematic comments about EBT cards on Monday—and the backlash was swift. Palmer, who has been in the entertainment industry for years, has largely avoided making controversial statements. But with her since-deleted tweet about EBT cards, she drew some negative attention.

In a now deleted tweet, KeKe Palmer said "Imagin if your EBT card could only work on healthy items…[bunch of looking eyes].
She really thought she was on to something.

I guess money made her forget actual life.
how expensive healthy food is. How little some fams get on EBT. pic.twitter.com/1OMxXCHg9A

In the tweet, Palmer wrote “Imagine if your EBT card could only work on healthy items…” The tweet was problematic to many, who thought that Palmer was shaming the poor.

Critics responded to Palmer’s comment by asking her to think about many families’ financial reality.

People who make comments like that deleted tweet don’t think about the fact that the healthier food is also the fresher food. Requires working kitchens. Requires gas/electricity. Requires storage. Requires the physical ability and time for prep.

Not sure if Keke Palmer tweeted some out of pocket stuff and is now just trying to save herself from backlash or if she was truly just minsunderstood. Either way, let’s not shame anyone on EBT or try to dictate what ppl should eat 😌

Why is Keke Palmer discussing EBT? It's extremely tone deaf and privledged to use that as a talking point while being rich. @KekePalmer do better please

Others made memes mocking Palmer by positioning her as the food police, out to get poor folks who buy junk food instead of organic kale.

Keke Palmer when she catches you buying Doritos n not salad mix pic.twitter.com/rZKnyJLCIH

KeKe Palmer when I use the link card to get a starburst pic.twitter.com/OZkDAF10J3

“I have been eating extremely healthy lately and I have been sad about my debit card balance because of it,” she wrote. “Healthy food is more expensive for a reason. It’s fresh, good for you and gives you energy. Bad foods are bad for a reason. They last long, they taste good because of tons of sodium and they aren’t expensive because they’re honestly not food.”

“Mostly likely they are food-LIKE products. In any event imagine if you could get whatever healthy foods you wanted on your EBT card. Like all the healthy foods could swipe for free. Pretty much a reward for being healthy but even more so giving homes a break that want to eat healthy but can’t afford it!”

To clarify my tweet was pertaining to issues w/ healthy foods being 2 expensive & thinking it should be free for those w/ EBT cards.

This was not a suggestion for solving all low income issues. Solely a hopeful solution 4 those with EBT that want to run it up w/ meat & produce.

On Twitter, Palmer wrote that her tweet “was pertaining to issues w/ healthy foods being [too] expensive & thinking it should be free for those w/ EBT cards. This was not a suggestion for solving all low income issues. Solely a hopeful solution [for] those with EBT that want to run it up w/ meat & produce.”

Still, folks were unhappy that Palmer doubled down instead of listening and learning.

Celebrities are often accused of being out of touch with reality. Perhaps Palmer had good intentions, but we should always listen and reflect when we upset people with our words.