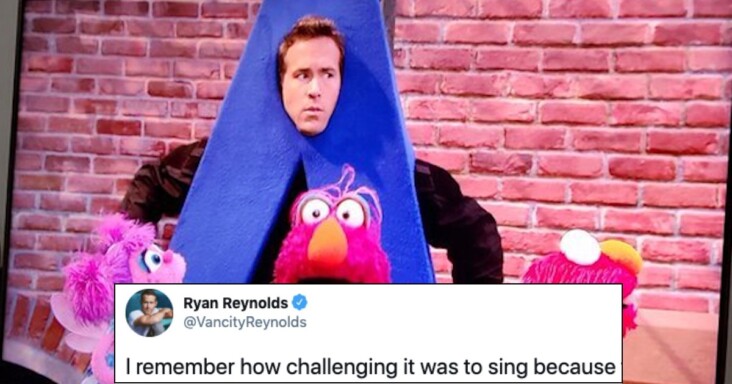 Actor Ryan Reynolds has lived a hundred lives in one, it seems. He’s played multiple superheroes, and even different versions of the same superhero, Deadpool.

He has a business selling gym, a life long feud with Hugh Jackman, and an antagonistic relationship with his wife, Blake Lively. And a few kids, I think? That’s a lot.

He also manages to have a very lively presence on social media, always joking around with fans and followers. But perhaps he’s gotten a little TOO comfortable.

One fan named @Felix87446772 noticed one of their favorite actors popping up in an episode of Sesame Street while watching with their kids.

They took some screenshots and tweeted, “Watching a little @sesamestreet with the kiddo, and its an episode with @VancityReynolds and the gang doing an A-Team gag. Its a delight, for both me and the kiddo.”

The Sesame Street screenshots show Reynolds dressed up as a giant blue A:

He fits right in with the Sesame Street crew:

The tweet went viral, especially after Reynolds noticed it. He quote-tweeted it, writing, “I remember how challenging it was to sing because the A-hole was so tight. But I pushed through because kids all over the country were counting on me.”

I remember how challenging it was to sing because the A-hole was so tight. But I pushed through because kids all over the country were counting on me. https://t.co/EiXEUjomxE

People were pretty shocked and horrified and also they really, really loved this double entendre:

You had me at A-hole was so tight.

If there’s someone who can get away with defiling Sesame Street using a-hole jokes, it’s definitely Ryan Reynolds.

Maybe he really did have a bad experience on set. Watch the whole segment yourself and see if the costume designer should have loosened Reynolds’ hole up for him before the cameras started rolling: