Yes, yes, we’ve all had our fun with Game of Thrones accidentally leaving a coffee cup sitting in front of Daenerys Targaryen during a feast in Season 8, Episode 4. The Internet responded with a relentless outpouring of memes, jokes, and disappointment with show runners David Benioff and DB Weiss for not noticing the cup was there. HBO eventually made a tongue-in-cheek statement and the cup itself was digitally removed from all HBO platforms.

However, the cup wasn’t the first time the show made an obvious slip-up or goof. Since season 1, fans have noticed plenty of visual mistakes and continuity errors on the show (though none as beloved as Daenerys’ latte). 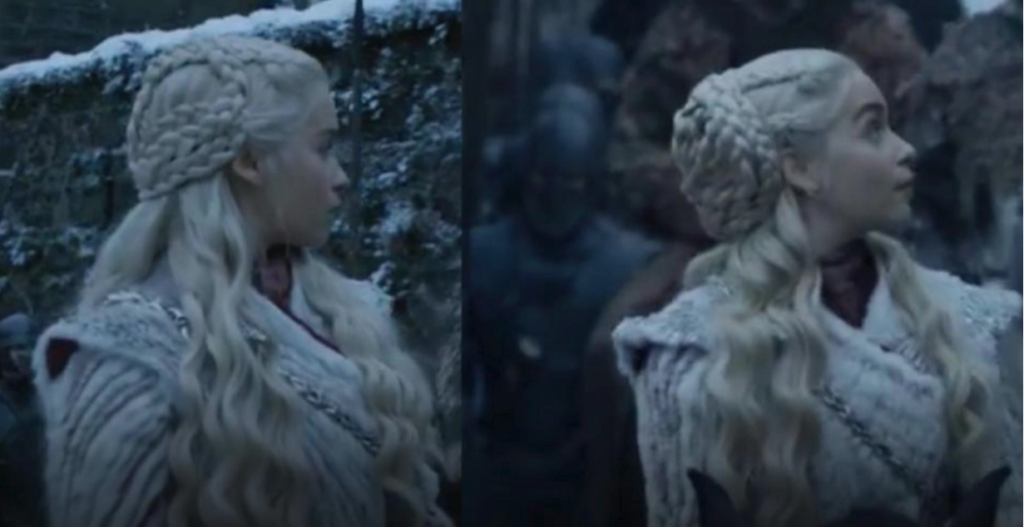 Earlier in Season 8, Daenerys’ braided bun randomly becomes much more elaborate from one shot to another. Her coat also seems to have gotten fluffier as well. Whoops!

2. Stannis was powered by a laptop charger. 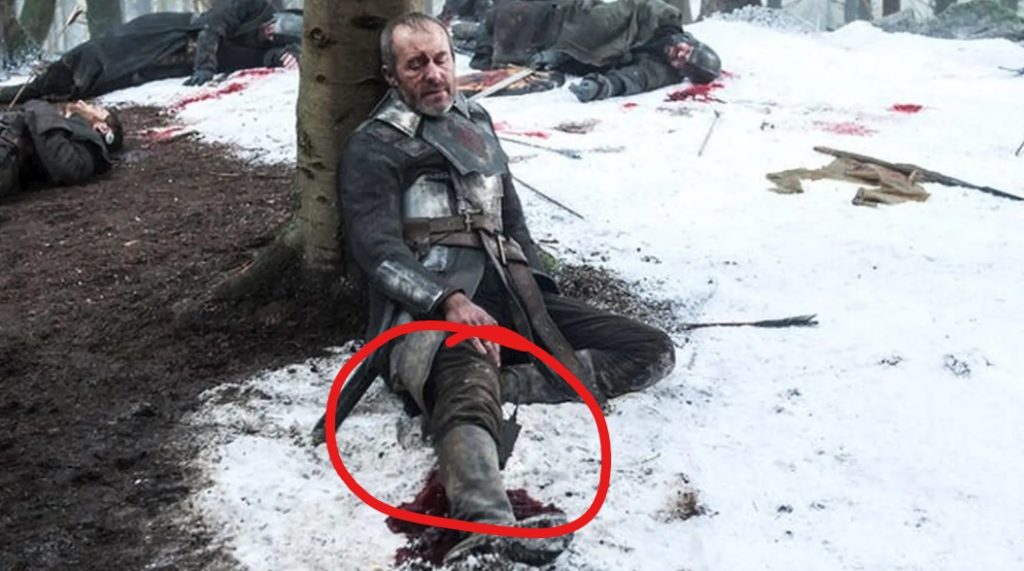 If you’ve been taking to Reddit and online forums to passionately argue your “Stannis was a robot the whole time” theory, then this might just be the shot in the arm your thesis needed. In a behind-the scenes photo of Stannis’ death, you can very clearly see a charger of some kind poking out from under his leg. The scene in the episode itself is much darker and more cleverly hidden, but if you anticipate it and look very closely, you can just spot the charger.

3. Jon Snow’s sword was clearly made of rubber.

Rubber swords are often used by film prop departments in certain scenes because they’re much safer than an actual metal sword. But when action hero Jon Snow runs to and mounts his horse in a failed attempt at saving Rickon Stark, viewers can clearly see his “Valyrian steel” sword flapping about all willy nilly.

4. Sansa was a Targaryen in Season 1. 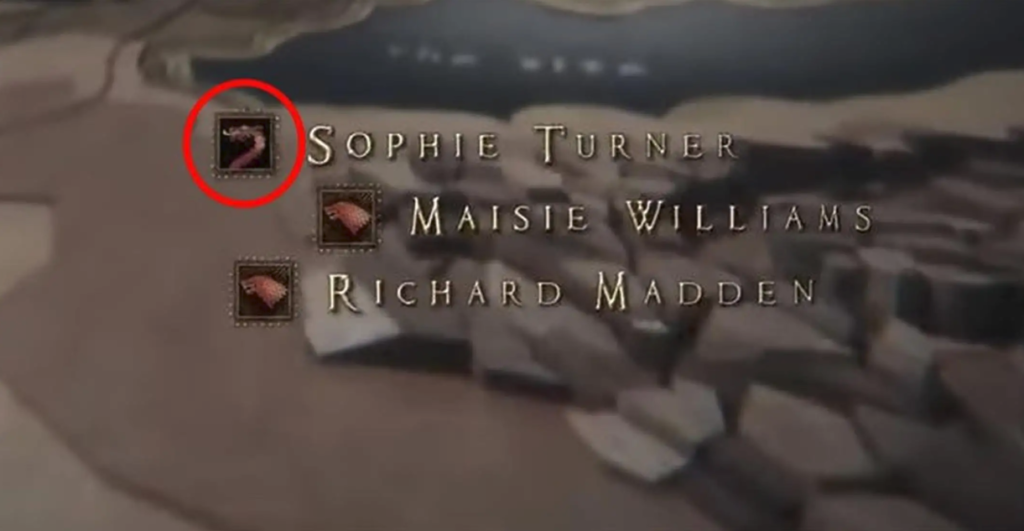 The opening credits of Game of Thrones remains one of the more memorable credits sequences on television. Part of the reason is seeing the sigils of the corresponding noble house next to a cast member’s name. Well, in season 1, Sophie Turner (Sansa Stark) was incorrectly labeled with the Targaryen sigil, despite showing up with her Stark siblings. I’m sure there’s a theory about this too. 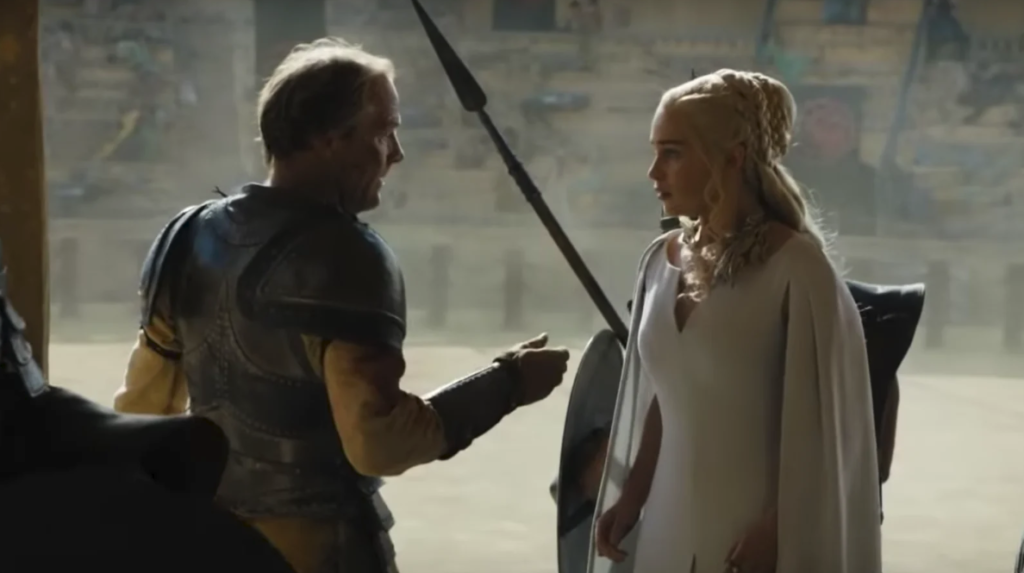 Remember how for a whole season we had to hear about Jorah “Don’t Touch Me” Mormont and his Greyscale? Y’know, Greyscale, the super-contagious skin disease that is spread through simple touch? Well in Season 5 Episode 9, after saving Daenerys from the Sons of the Harpy, what does Jorah do? He offers Dany is exposed hand to help her down from the stage, and she takes it. So, she should absolutely have contracted Greyscale and died.

6. Melisandre should have died in the bath tub. 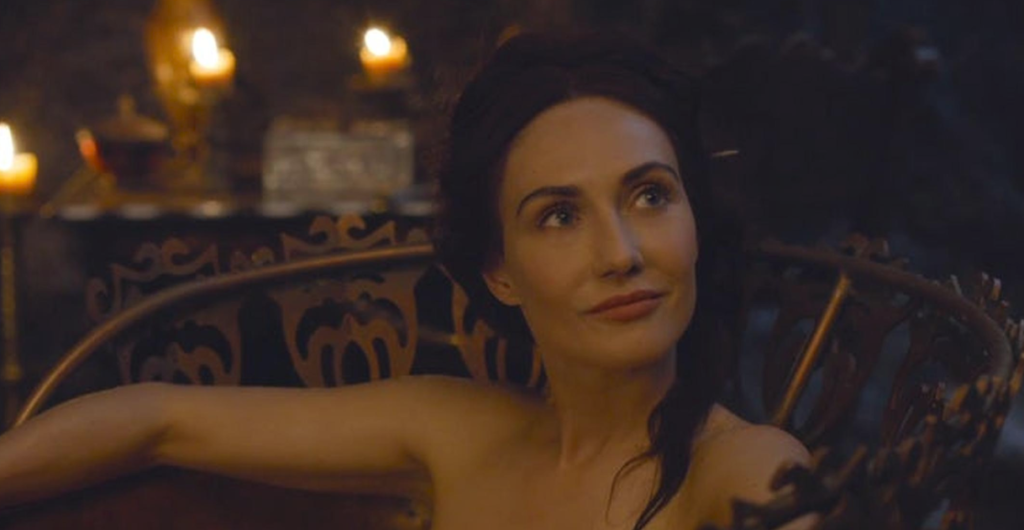 In Season 6, we learn that Melisandre’s youth and beauty are attributed to the giant honkin’ red necklace she wears around her neck. However, in Season 4, when speaking to Lady Baratheon from the comforts of her bath tub, she’s clearly seen without the necklace on. Maybe she had a pinky toe ring that had the same magic powers?

7. George W. Bush was impaled on a spike. 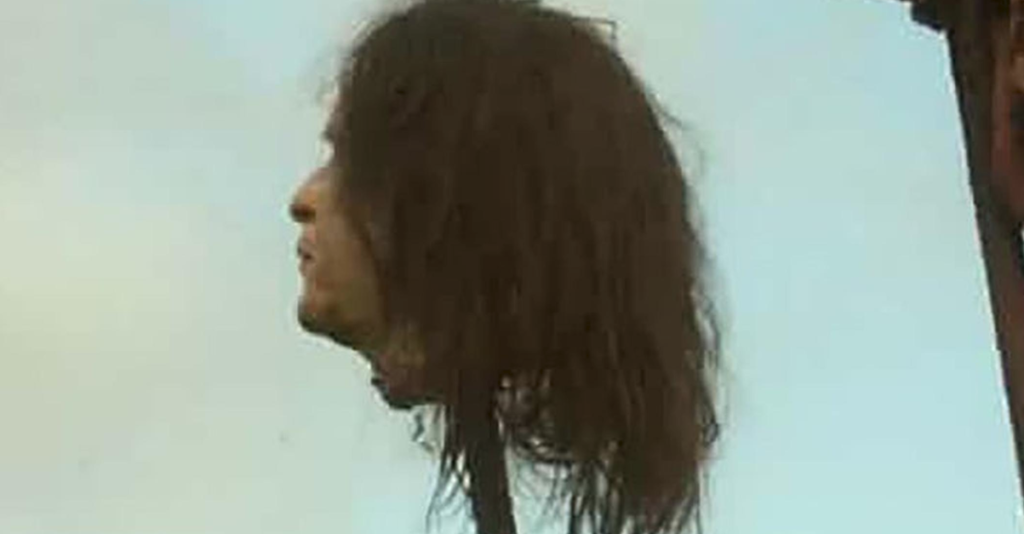 This one was more the result of a lower Season 1 budget and an attempt at creative use of resources, but when Joffrey takes Sansa out to look at her father’s severed head on a spike in King’s Landing, one of the accompanying heads is in fact that of former U.S. President George W. Bush with a long-haired wig on.

The show runners chalk this up to having to use every available resource available to them and I guess the prop department just happened to have a severed Bush head lying around, but they later apologized and the W’s head was removed from the DVD release of Season 1. 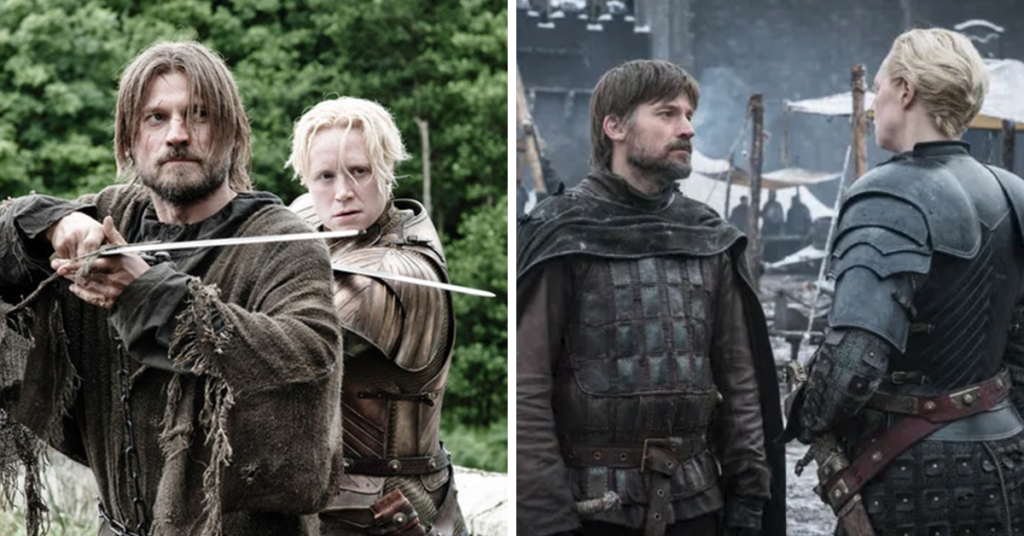 Jaime and Brienne have had a seasons-long arc for awhile now, but their height has never really been consistent. In Season 3, Jaime was shot in a way that made him close to Brienne’s height, but in later seasons (including his recent betrayal of her) she towers over him. Maybe he was just wearing heels the whole time.

9. Daenerys “forgot” about the Iron Fleet in Season 8, even though everyone was reminded of the fleet a few scenes earlier.

Season 8 just can’t seem to get its act together, can it? Audiences were shocked when Rhaegal was shot down by Euron’s ships and so was Daenerys, as she watched her scaly child plummet into the ocean and die. But should Daenerys have been so shocked? In the post-episode recap, David Benioff explains that Daenerys “forgot” about the Iron Fleet, but in just a few scenes before the attack, Varys literally tells every important character that Euron’s fleet just brought the Golden Company to King’s Landing. Seems like a pretty important piece of info to remember, no?

The writers of Game of Thrones are dumb as fuck. pic.twitter.com/oxBDLoIVF4

Despite all your many goofs and slip-ups, I still love you, Game of Thrones. Warts and all.