On Wednesday, HBO announced a new show called Legendary, a vogueing competition. People outside the ballroom world might not know much more about vogueing than what they learned from Madonna, but the sad fact is she stole vogueing from primarily black and latinx LGBTQ+ performers. Nowadays it would be called cultural appropriation.

Ballroom vogueing is a very specific style of performance that was created in a specific context, and the subculture is protective of its community. That’s why Jameela Jamil received such a backlash when it was announced she’d be a judge on Legendary. As far as anyone knew, she had absolutely no connection to the subject.

While some people are critical of the idea that ballroom would be exploited for mainstream culture to begin with, most agreed that a high-paying TV job should at least go towards someone who has relevant experience.

Trace Lysette, a trans woman and actress, commented on the news, writing, “Lol.. I interviewed for this gig. As the mother of a house for nearly a decade it’s kind of kind blowing when ppl with no connection to our culture gets the gig. This is not shade towards Jameela, I love all that she stands for. If anything I question the decision makers.”

Lol.. I interviewed for this gig. As the mother of a house for nearly a decade it’s kind of kind blowing when ppl with no connection to our culture gets the gig. This is not shade towards Jameela, I love all that she stands for. If anything I question the decision makers https://t.co/kJleDihn02

Unfortunately, Jamil has a habit of commenting on a lot of things in public, and she responded to Lysette, saying, “Hey trace. I think you auditioned to be one of the house mothers. I’m just one of the judges. Not a house mother. We weren’t up for the same thing.”

She added that she wasn’t the MC, and sent Lysette a heart emoji. Lysette disagreed:

I don’t have audition to be a house mother… I am one. I remember the convo well. It was a convo in regards to be a host/producer. At least that’s what my manager at the time worked out. I never heard back. I send you love too. But I will always speak my truth.

Conversations between producers that have now been lost to the ages, but Jamil’s comments aren’t. People have been frustrated with her response and inconsistent story, which has gone back and forth over whether or not she is the MC or just a judge. Out Magazine shared a clip of the original press release, which read, “HBO Max announced today that actress, activist and host Jameela Jamil will MC and judge Legendary, the 9-episode unscripted voguing competition series from Scout Productions.”

Jamil also originally tweeted a link to the Deadline story she is now blaming for the mix-up, but has deleted it and added this to her timeline:

Hello! @DEADLINE says I am the MC of this show! I am NOT. I am just one of the judges. The brilliant @DashaunWesley is. With help from the fabulous @TheOnlyMikeQ I’m a long time fan of ballroom and just wanted to help this show get made to celebrate this beautiful community. ❤️ pic.twitter.com/ot7SEYnZTr

Is this all a case of mass confusion? Possibly. But even if Jamil is just a judge, the original criticism that she as no history of being involved with ballroom or even claiming to be a fan. The casting still reads as strange to many.

WHEW! I don’t want to think about this too much cause thinking about it only further reveals how f’d up this really is and you know what??? Just no. No, no, no, no, no. This DEFINITELY should’ve been with @tracelysette or @KingAmiyahScott TBH, they BOTH have the star power! https://t.co/dQNFA0CUIb

Deleted a less diplomatic tweet but without dunking on anyone, this is an odd choice. You’d want a judge to be familiar with ballroom and I don’t know that Jamil is? There are people I can think of with enough star power and expertise. This matters to me as a queer black person. https://t.co/1gnR8ncOGH

So many queer Black & brown queer creatives and ballroom house members could have used this type of platform, especially one centered in our culture. https://t.co/UleTqUViM1

The epitome of “taking up space”. https://t.co/eYl0JfgSET

And now all of this has culminated with Jamil coming out as queer on Twitter: 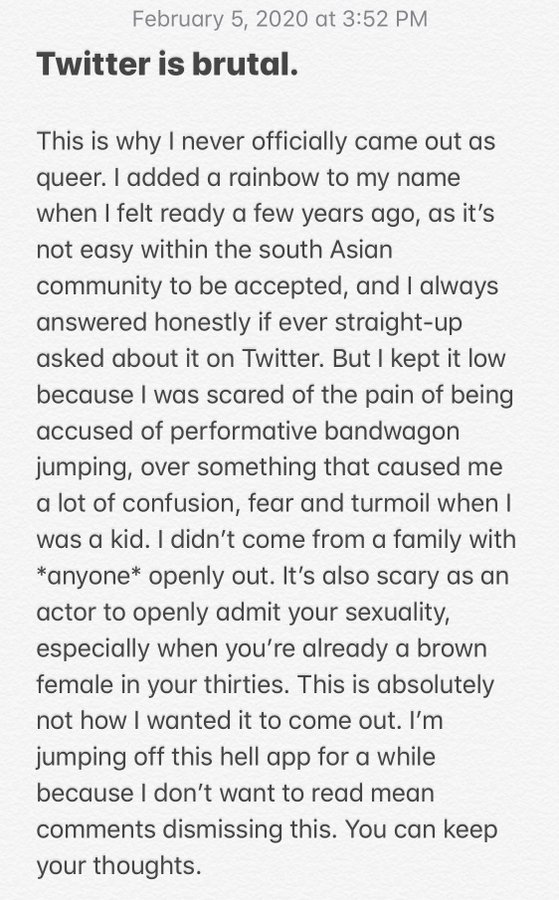 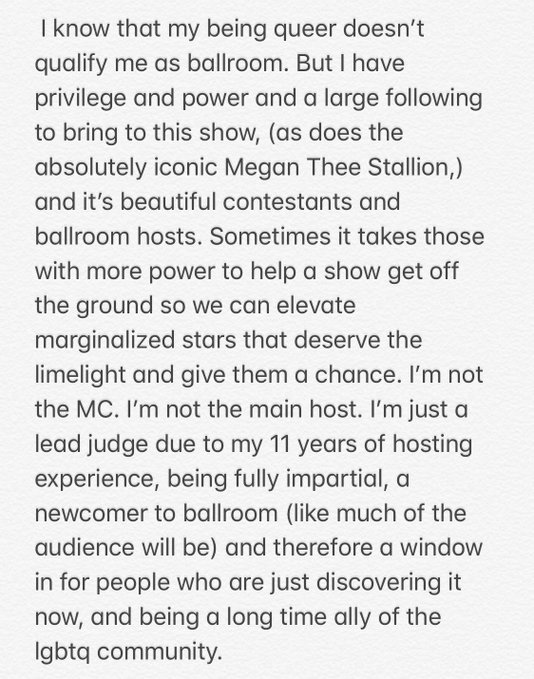 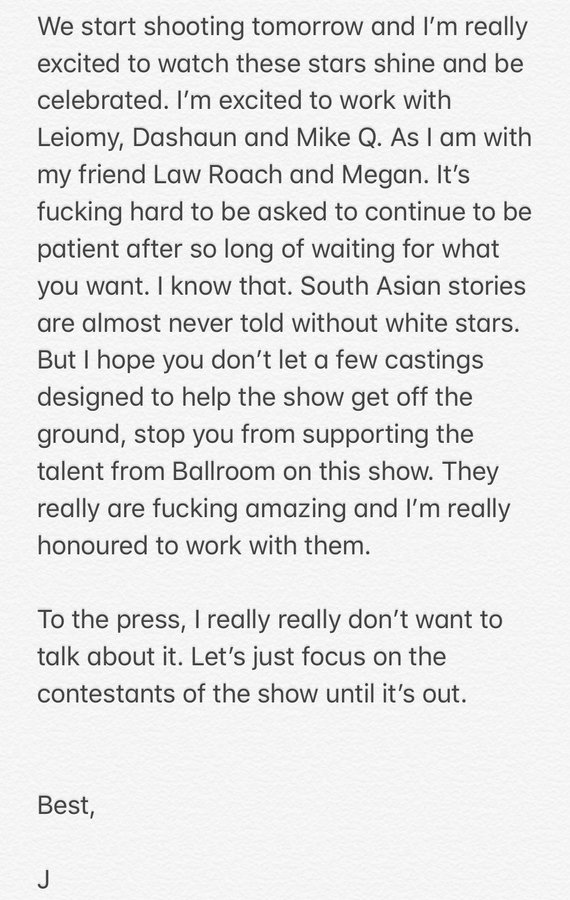 Jamil’s long statement touches on a lot of issues—how being queer for bisexual or pansexual women is often seen as fake, trendy, or insincere. On the specific issues of coming out in her own culture, as a British woman of South Asian descent.

The whole note is titled, “Twitter is brutal,” and Jamil writes that she’s going to be taking a break from the app to concentrate on filming.

Her tweets seem to imply she was bullied into coming out, though she recognizes being queer doesn’t necessarily mean she knows anything about ballroom. But she justifies her involvement by saying she brings a huge audience to the show, much like Megan Thee Stallion.

1). Congrats on coming out and I’m sorry it had to be like this.

But 2). “it wouldn’t sell with more marginalised people so I’m going to take a place that should have belonged to them” is a terrible response.

TV writer and podcast host Ira Madison might have the clearest criticism to Jamil’s statement:

Jameela once said she turned down a role as a deaf character because she is not deaf. Announced this publicly to let us know she would never take up space. It is not illogical that many queer people of color yesterday then wanted to know why she, who had not come out as queer

By this reasoning, any time a straight person is cast in a queer role or a non trans actor is cast in a trans role, no one should ever voice concerns because…. what if they ARE they just haven’t told us. It’s bullshit and of course her fans are eating it up.

It’s too bad that this controversy is overshadowing the show, which likely will feature a lot of unknown talent who could benefit from the exposure. Maybe once the show is out, they’ll shine brighter than any judge.