The past decade has seen PC culture completely transform the landscape in how people think, create, and react—so much so that many pop-culture milestones now feel like ancient relics from the past. A prime example of this is the 2008 comedy satire film Tropic Thunder, which featured the now-A-list actor Robert Downey Jr. in blackface throughout the movie as a running gag.

The conceit is that the role Downey Jr. portrayed was that of “Kirk Lazarus,” an Australian method actor who went so far as to undergo a controversial “pigmentation alteration” surgery to darken his skin for his portrayal of a black character named Staff Sergeant Lincoln Osiris. Throughout the fake “filming” of the movie-within-the-movie, Lazarus refuses to break character, speaking only in an exaggerated African American dialect.

Cringeworthy? Maybe. However, it’s worth pointing out that screenwriter Etan Cohen created the role as a way of lampooning the ridiculous lengths that some method actors will go to.

Whether or not that made (or makes) it acceptable is a debate for another time, however, a fresh new crop of woke teens—having probably weaned themselves on Ironman and other Marvel films—are just now catching on to the Tropic Thunder character, and they are NOT OKAY with it! 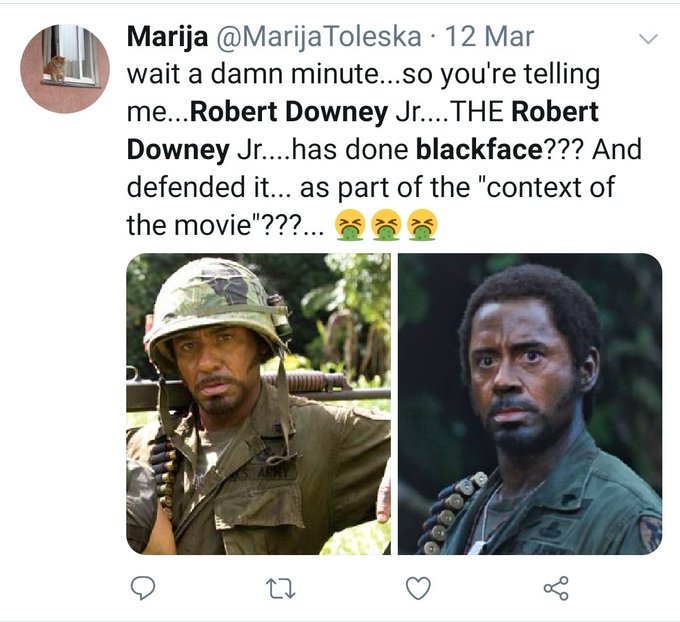 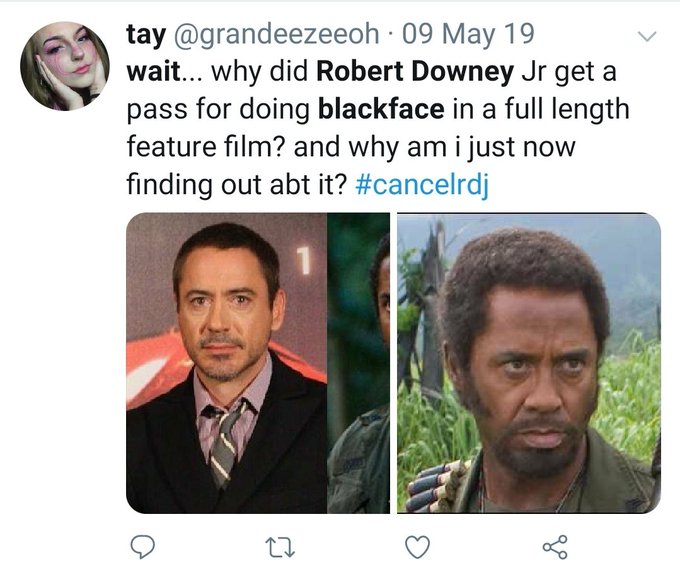 As Gesualdi’s tweet began to go viral, others piled on to mock these (mostly) well-meaning teens, who have no idea what it’s like to live in times before cancel culture and social outrage.

when he came out of the “pigmentation process” and was celebrating the fact he was literally just in blackface like it was some accomplishment that’s actually one of the funniest depictions of what hollywood is actually about https://t.co/muII1VwTxY

Teenagers: Robert Downey Jr wore blackface and got away with it & didn’t apologize. And you people defend him ?!?!

…I thought it was a parody that these fuckers were mad about Tropic Thunder… https://t.co/OlwDEh4Qt3

Every 18 months or so, a fresh crop of woke youngsters discover Tropic Thunder and I guarantee none of them bother to watch it. https://t.co/sSQTX0dnwc

RDJ owes my uncle money, I swear to fuck it was like watching Dabo do a film with Ben Stiller. Now the children caught on and are shocked ironman did this? It’s RDJ’s best role! 🤣 https://t.co/wovIYg98sL

“Remember that time Robert Downey jr did full blackface to shine a light on the ridiculous practice of it for a comedy movie? What a great actor and film.”

Others pointed out that Downey Jr. actually received an Oscar nomination for the role. (Not to mention BAFTA Award and Screen Actors Guild Award noms, as well as a shared Golden Globe Best Supporting Actor nomination alongside Tom Cruise!)

Not only did Robert Downey Jr. wear blackface in Tropic Thunder, he got an Oscar nomination for his performance. Obviously the role is meant to mock white people in blackface (not black people), but still, these days it feels like that film is from another dimension.

People mad about Robert Downey Jr doing blackface are going to be even more mad when they realise he got nominated for an Oscar for it. pic.twitter.com/IDWhAkjJqA

Another pointed out that—by today’s standards—the blackface character was if anything, the least offensive thing about Tropic Thunder.

Wait until they find out about Simple Jack https://t.co/AYiy5IcdyP

And god forbid the youths ever go back and watch the earlier seasons of It’s Always Sunny in Philadelphia:

oh no wait till the find out about its always sunny https://t.co/22YTZK2KjB

With all due respect to young people—there are plenty going on right now in this moment to be outraged at—so maybe their anger could be best directed elsewhere.