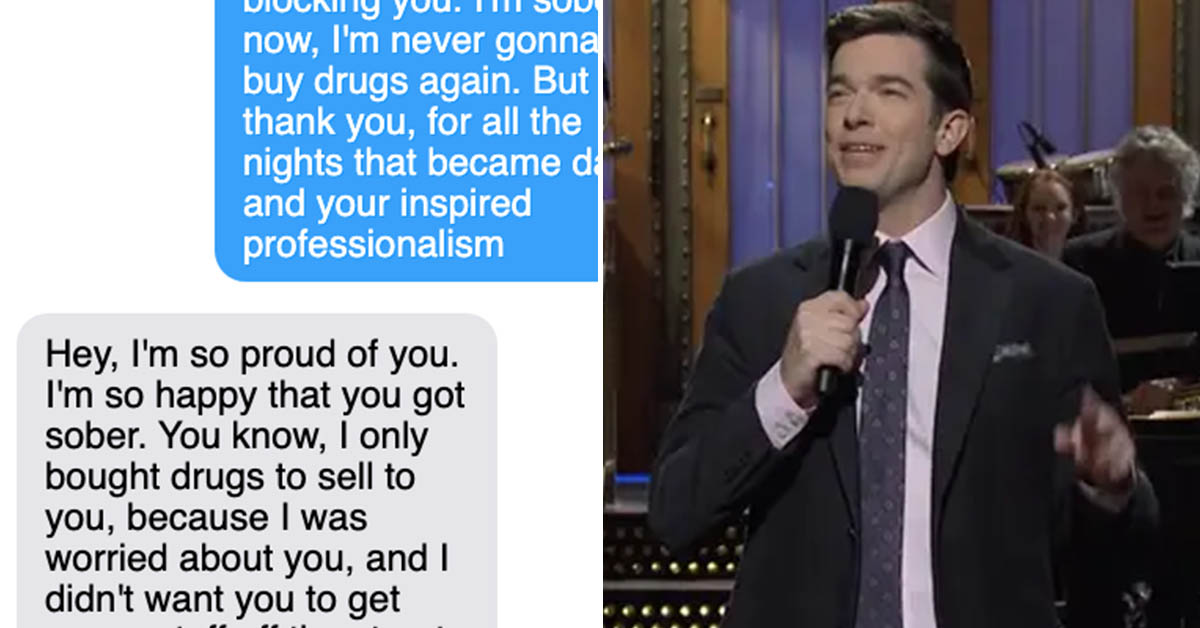 “I drank for attention,” he told Esquire. “I was really outgoing, and then at 12, I wasn’t. I didn’t know how to act. And then I was drinking, and I was hilarious again. I wasn’t a good athlete, so maybe it was some young male thing of ‘This is the physical feat I can do. Three Vicodin and tequila and I’m still standing. Who’s the athlete now?'”

Now sober, Mulaney returned to SNL this week to join the “Five-Timers Club” of people who have hosted 5 times or more, and did not hold back about his road to sobriety.

He spoke first of his intervention, saying: “Since I last hosted, different things have happened…”

“Do you know how big of a drug problem you have to have if you open a door and see people gathered, and your first thought is, ‘This is probably an intervention about my drug problem?’” he quipped.

Next, he told the story of him sitting down with a “12-Step” sponser who asked Mulaney to delete and block his drug dealer. “It’s called ‘breaking up with your drug dealer.’ I texted my main dealer, Arvin — I shouldn’t have said his name, but that’s OK, you don’t know him.”

“Before I can delete and block him, he texts me back and goes, ‘Hey, I’m so proud of you. I’m so happy that you got sober. You know, I only bought drugs to sell to you, because I was worried about you, and I didn’t want you to get worse stuff off the streets.'”

Ok, we’ll just let you work through to the punchlines yourself. It’ll be funnier that way.

YouTube commenters on the SNL video were even surprisingly supportive and thoughtful for once:

If you’re struggling with addiction, as I once was, please know that (1) you’re not alone, and (2) you may not believe me, but at least in my experience, if you put in the very hard work of getting sober now, someday I promise you’ll have some equally hilarious and bittersweet insights like John.