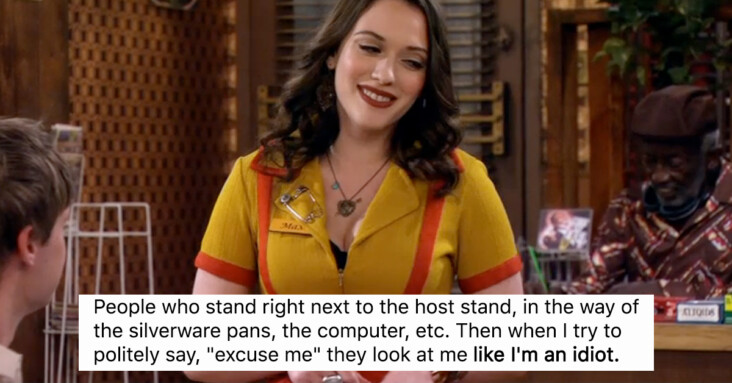 Servers work a grueling and often thankless job. Soon, you’ll be out at restaurants again, and it’s important to show your appreciation for this kind of frontline worker. Sure, they’re not nurses or teachers, but they have saved your life many times when you count how many times you needed to dine out because if you had to cook, you were going to have a mental breakdown.

People in food service have had enough. Thankfully, they survive in this world because of people who tipped more than you did. It’s very important to read what these employees at your favorite restaurants have to say about awful customers.

Don’t be that guy.

Here are the pet peeves, horror stories, and common rudeness your server is sick of seeing in restaurants:

1. Servers don’t have all the time in the world.

When someone calls expecting you to read the entire damn menu to them.

So many people order massive steaks well-done. Then, they get mad at me because it’s taking too long. I’m sorry you decided you wanted beef jerky. It takes a couple of days!

I was a server for too long at a Red Robin. The worst thing a customer can do is not move their hands out of the way when I’m trying to put their plate in front of them. I once got third-degree burns on my hand because of this.

People who stand right next to the host stand, in the way of the silverware pans, the computer, etc. Then when I try to politely say, “excuse me” they look at me like I’m an idiot.

People who are condescending and rude right off the bat.

6. Let me know if you need anything but please, do it now.

It’s annoying when people make their server take multiple trips back and forth because they don’t order everything at the same time. If you know you like ketchup, ranch, hot sauce, and more ranch, please ask for it all at once.

Wanted an Oval plate instead of a Circular plate…

I had a guy complain that his wife was cold, while they were sitting on the patio. I suggested moving inside but no, “we want to sit outside and she’s cold. What are you going to do about that?” “Sir, I’m sorry I can’t do anything but offer to move you inside.” “Well, you’re wearing a sweater. Aren’t you even going to offer it to her?” “No, sir, I’m not going to give your wife MY sweater.” So he asked to speak to my manager who had to spend ten minutes explaining that he was not going to require me to hand over the literal clothes off my back and that we have no control over the weather.

9. Be nice to your own family.

One time I was working the restaurant side, running food out to someone elses’ table and I almost tripped on a child that was running around. After I set the food down I looked out and noticed the kids just running around the entire building. Jumping into other people’s booths or doing things at their table etc. A lot of the customers were getting upset so our manager asked them to please control their children.

The parents got EXTREMELY upset and started screaming saying it wasn’t their responsibility it was ours they are paying customers the kids can do what they want. Our manager says if they don’t get their kids under control they are going to be asked to leave. One of the little girls runs past her mom at this time and the mom grabs her by the throat lifts her off the ground and yells “SIT DOWN OR THIS BITCH IS GOING TO MAKE US LEAVE” and drops her. By this point my manager is on the phone with the police and about 7 tables are trying to find the number for CPS.

The parents realize what is happening and run out without paying. About 25 customers and some employees follow them outside and try to take down their license plate.

The ones who come in on their lunch break, order a well done burger and then bitch that it’s not done in 8 minutes.

11. Hitting on the staff at the wrong moment.

I had a group of three middle aged men in one of my booths. Everything was going well, and they even laughed at my lame server jokes.

In the midst of us talking I mentioned that I had been in New York City a few days before this particular shift and said I was tired from it.

The men told me they had never been to New York before and ask what it was like and what I had been doing. I explained it was for my sister’s bachelorette party. Almost immediately they asked if I had any pictures from the trip because they had never been there. So I got out my phone and showed them typical tourist shots that I had taken.

They were very polite about it and said it looked like I had a great trip. Eventually they were done, left me a nice tip and I didn’t think much of it as I continued working the rest of my shift.

It wasn’t until later that night that I got a call on the work line.

One of the servers said that a guy who ate in my section wanted to talk to me. I was really confused but answered the phone.

It turns out it was one of the men from the booth from earlier. He told me he was staying at the hotel about a quarter of a mile from my restaurant. He then asked me if I had any more pictures I could show him from my trip, as he put it, “some that might not be appropriate to show while working.” And then he proceeded to tell me he had a jacuzzi tub that I could relax in after my long night at work.

It was totally creepy. And I tried to be as polite as possible to get him off the line. As I tried to say no, he kept asking when I got off work and if I was SURE I didn’t have anything I wanted to show him and talk to him about.

I ended up lying about when I got off work to make sure he didn’t show up in the parking lot. The guy was at least twice my age and it made for an awkward night.

My pet peeve is when people shake their glass at me for a refill, or insist that everyone at their table needs water, and then nobody ends up drinking it.

Literally nothing irritates me more than when people snap at me. I’m not your dog or your servant. Do not snap at me.

My favorite is when they find their own hair in their food. A girl with long blonde hair sent her good back once because she found a long blonde hair in her food. I am a male with short brown hair, and the entire kitchen staff is Hispanic males with short black hair. It was… amusing…to say the least.

15. When the customer is sometimes wrong.

Server dropped the food off at the table and 20 minutes later had it sent back because it was cold. Get off your phone then maybe it wouldn’t be cold.