If you are friends with a baby boomer on Facebook, you are probably well acquainted with this generation’s particular and oftentimes confounding style of social media interaction.

Their comments are frequently written in all capital letters and riddled with unnecessary punctuation and inapplicable emojis. They post blurry photos of walls and seem to enjoy dropping insults on the Facebook pages of big brands such as Walmart and, infamously, Bush’s Beans. They can be hilariously irreverent when they want to be, often to delightful results.

The online behavior and conversational pattern of old folks has become such a delightful part of Internet culture that they’ve spawned their own fan club, an 867,000 member-strong ‘Old People Facebook‘ subReddit. And now its come full circle. 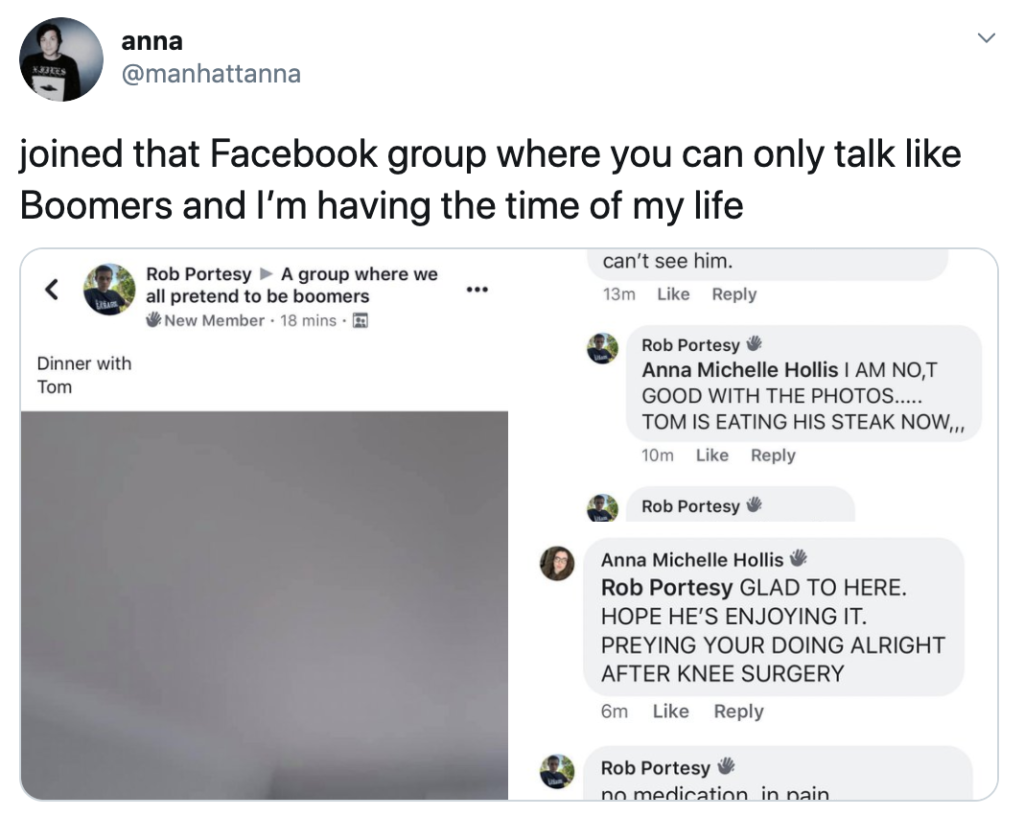 “Joined that Facebook group where you can only talk like Boomers and I’m having the time of my life,” @manhattana captioned her post, which included three screenshots of posts in the group. 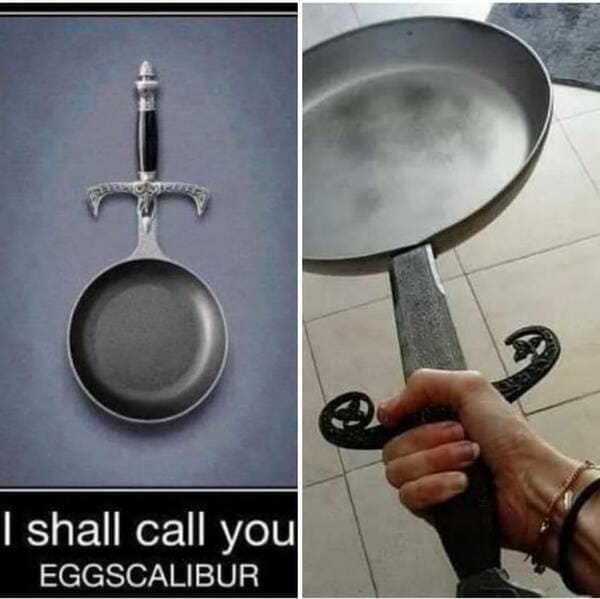 “Dinner with Tom” reads one of the posts, the name ‘Tom’ inexplicably on the second line of text, alongside a blurry photo of a room.

“Can you take anOther photograph I can’t see him,” reads a comment underneath the photo, prompting a boomer-like back-and-forth exchange. 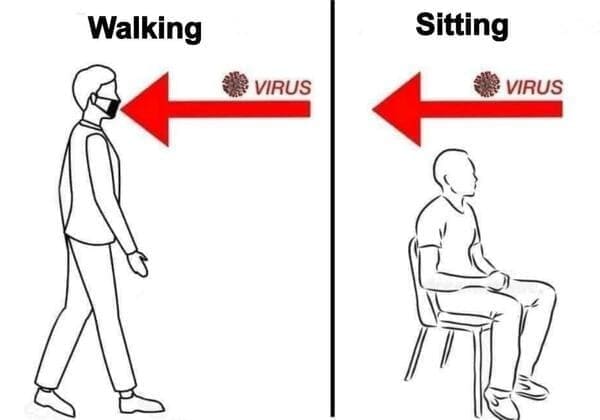 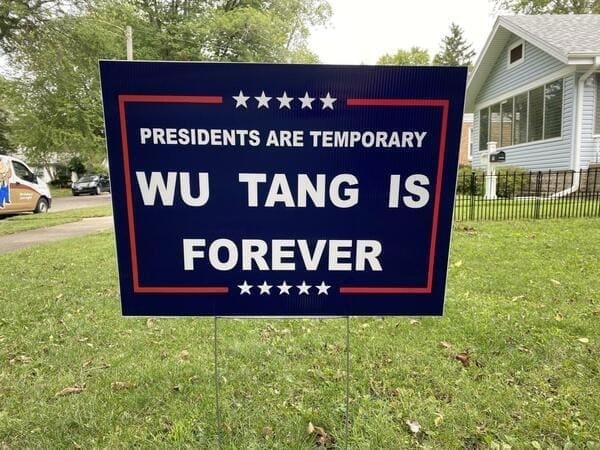 She shared a bunch of other posts from the group in the ensuing thread, some making fun of boomers who post sad messages against colorful Facebook status backgrounds, others employing the beloved Minion meme. 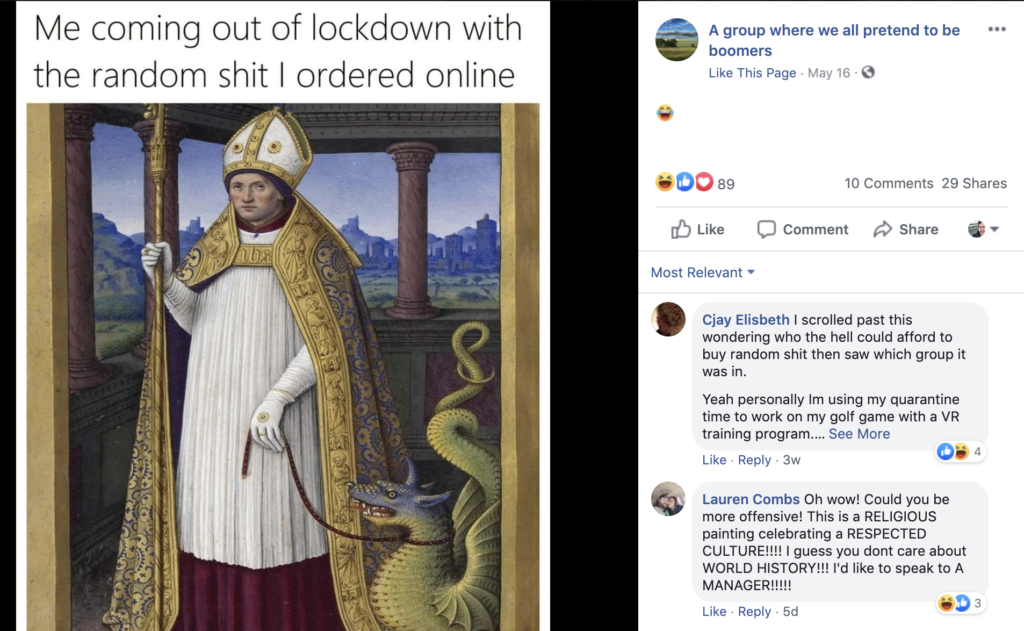 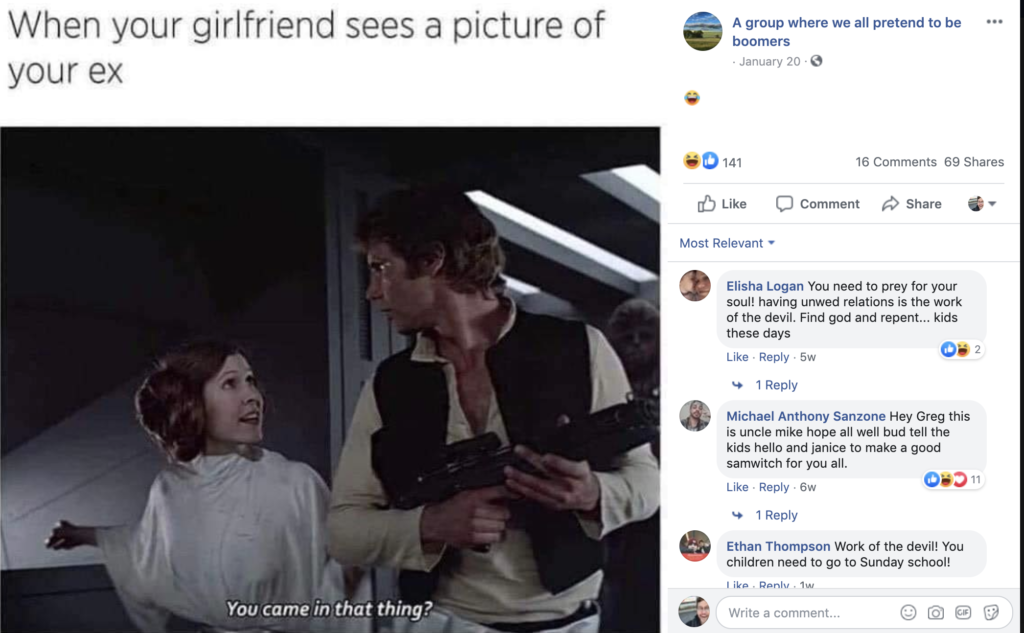 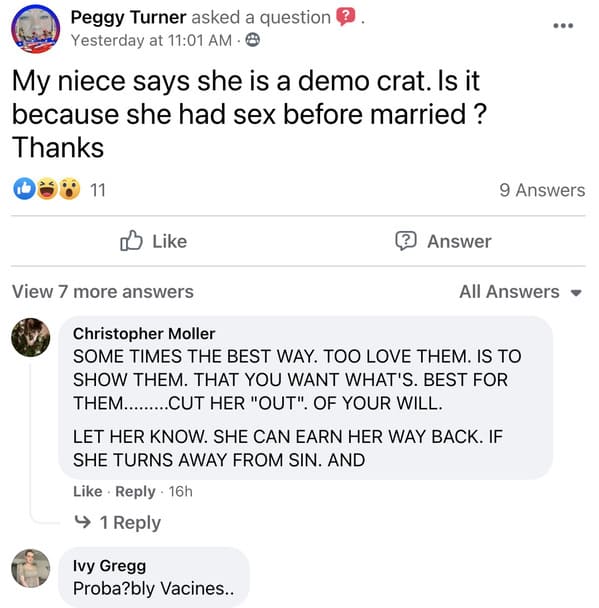 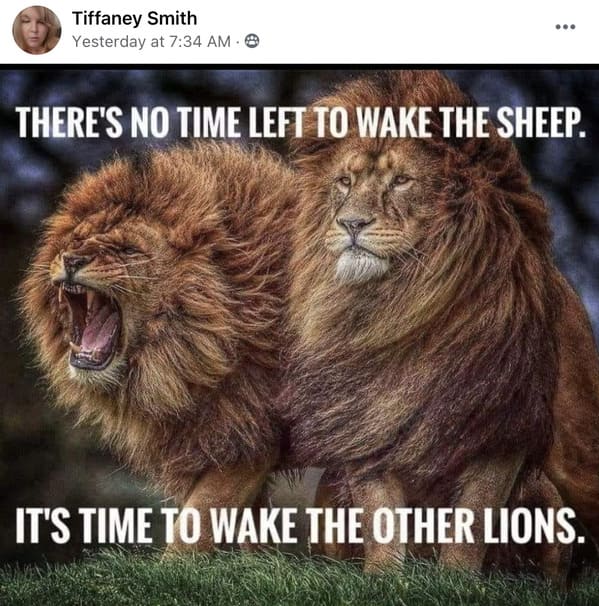 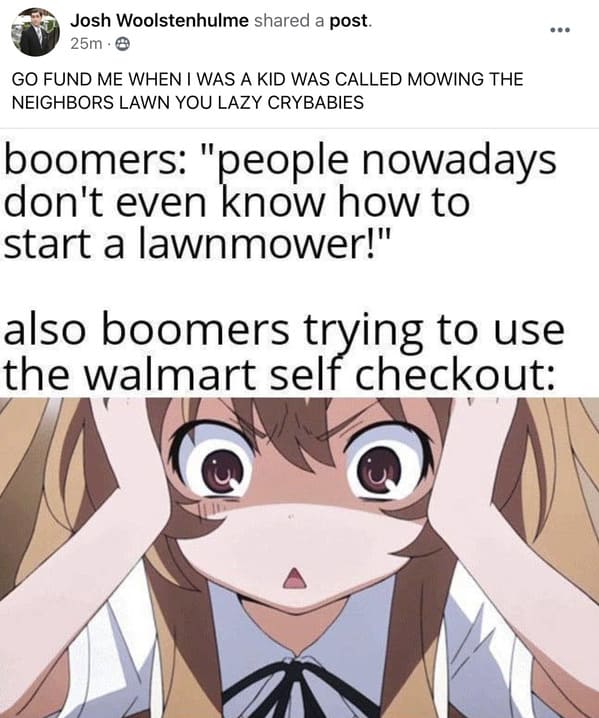 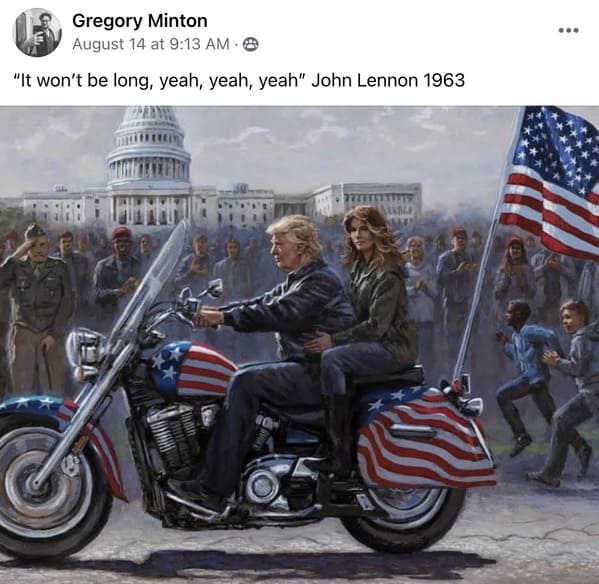 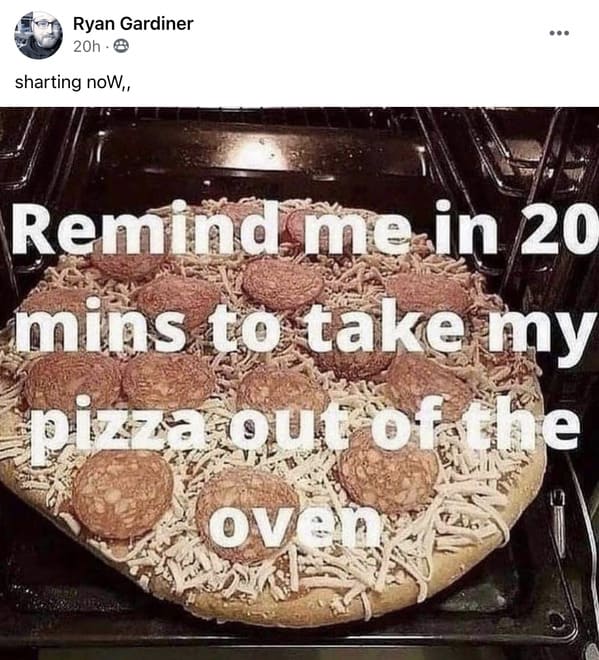 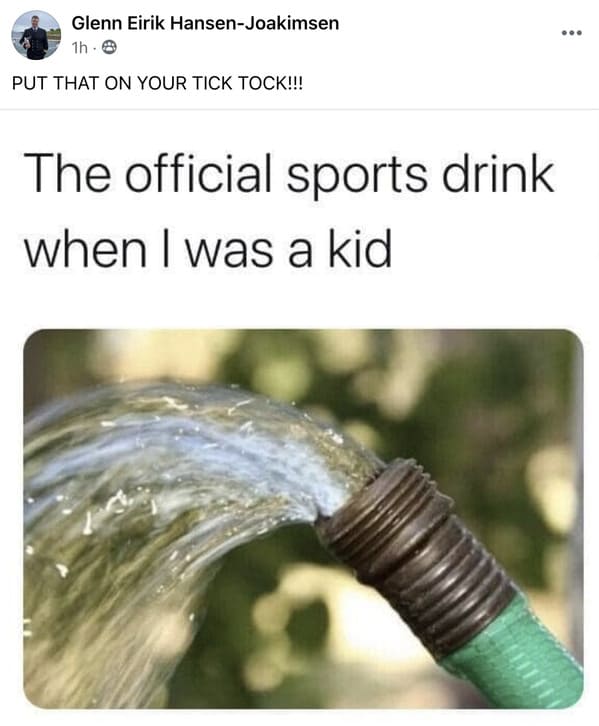 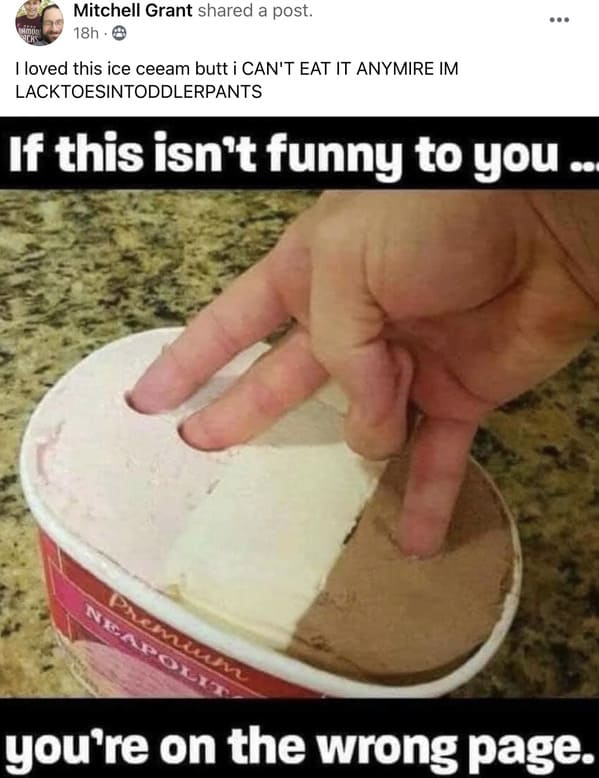 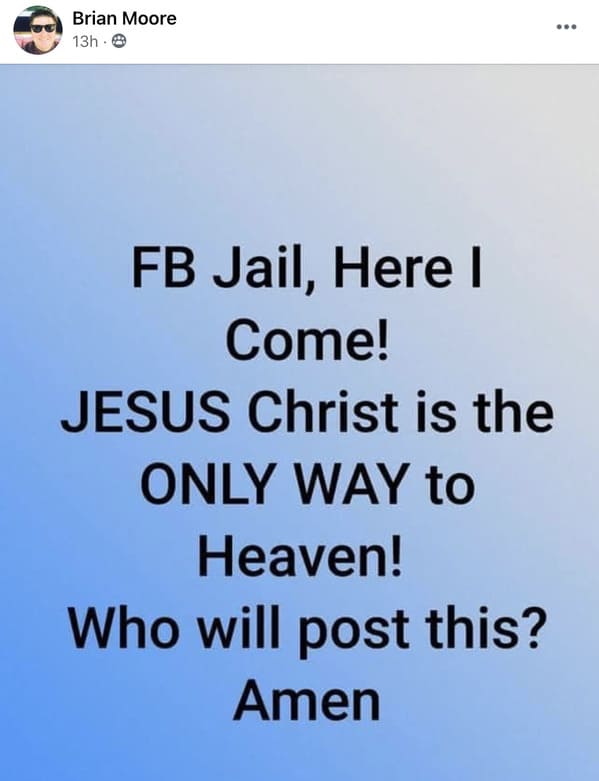 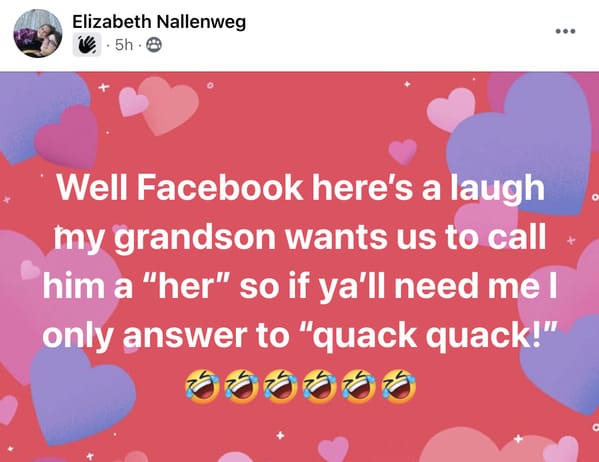 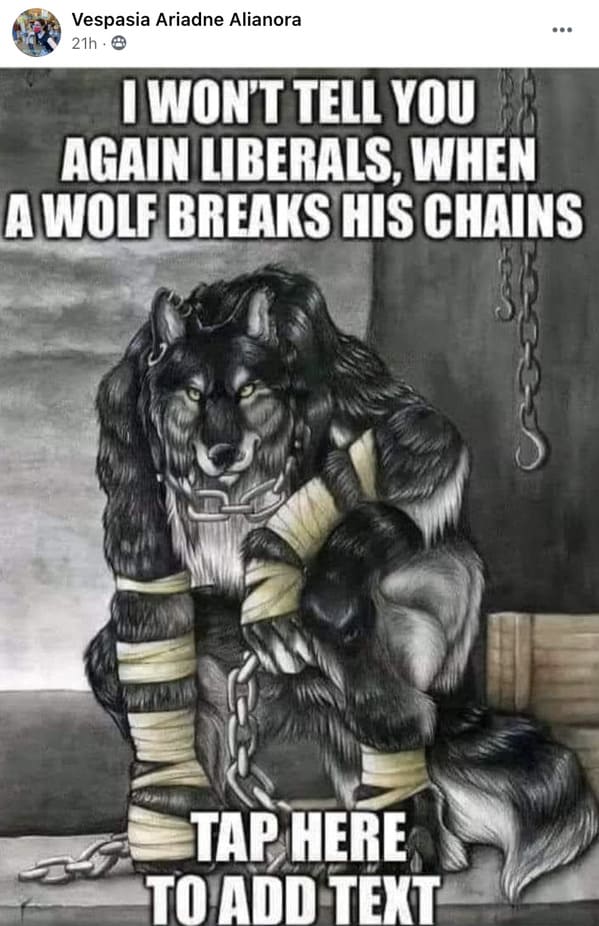 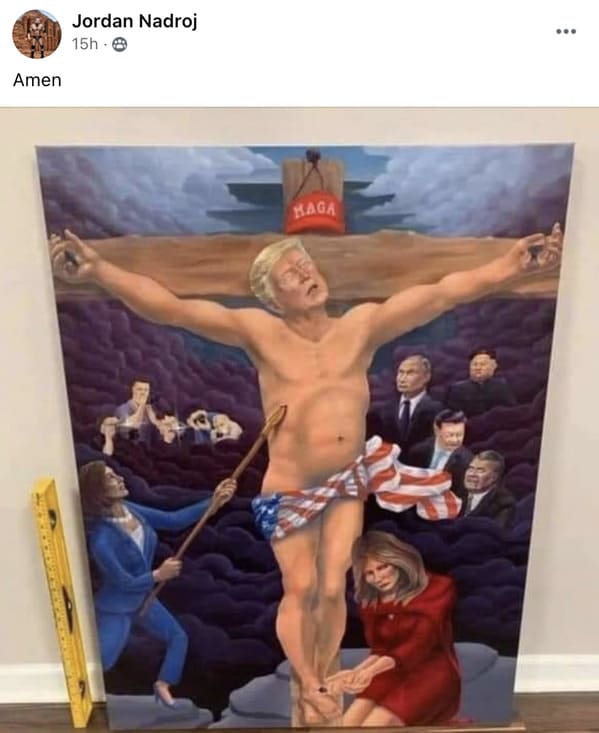 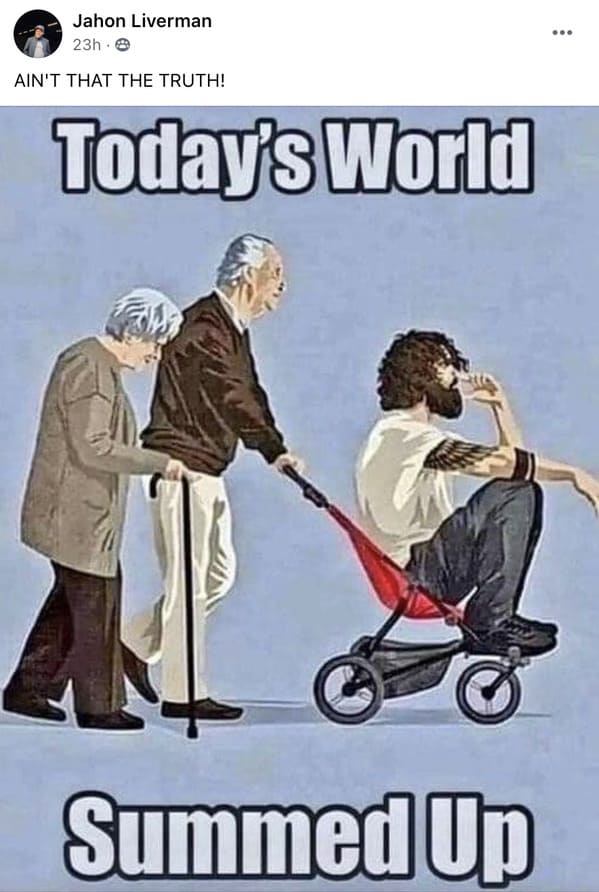 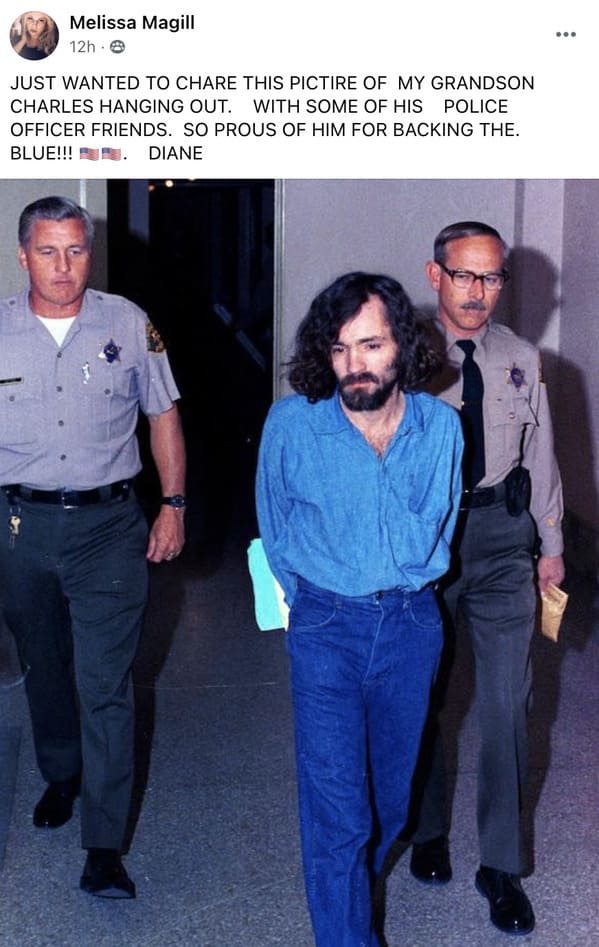 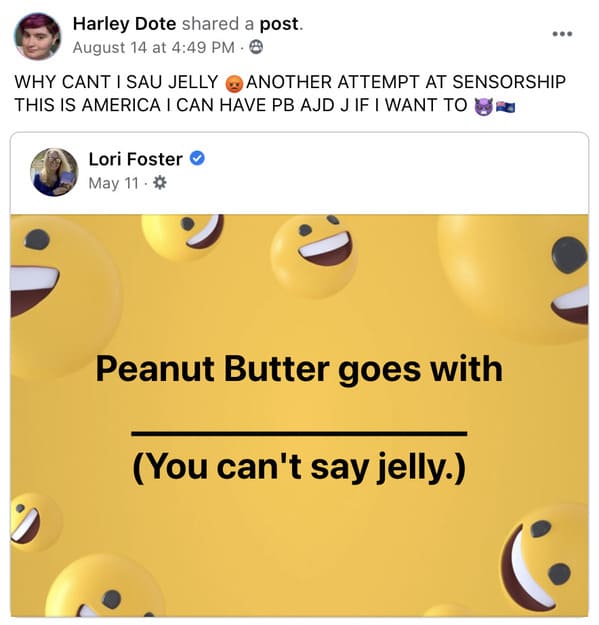 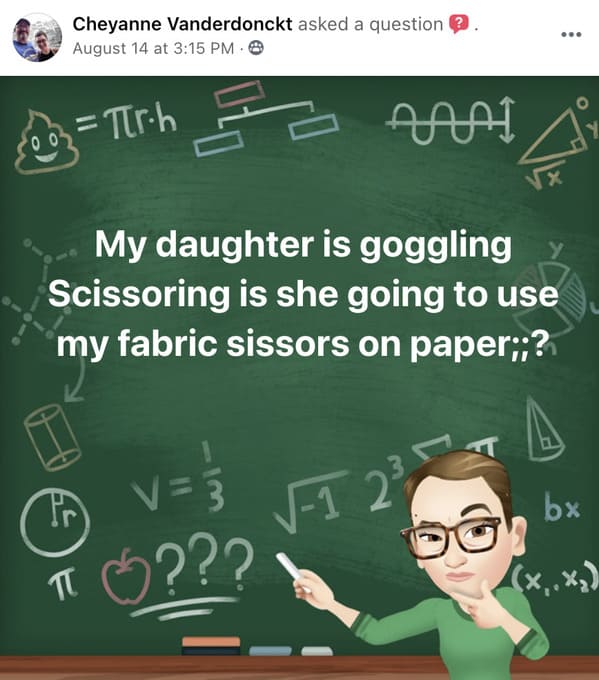 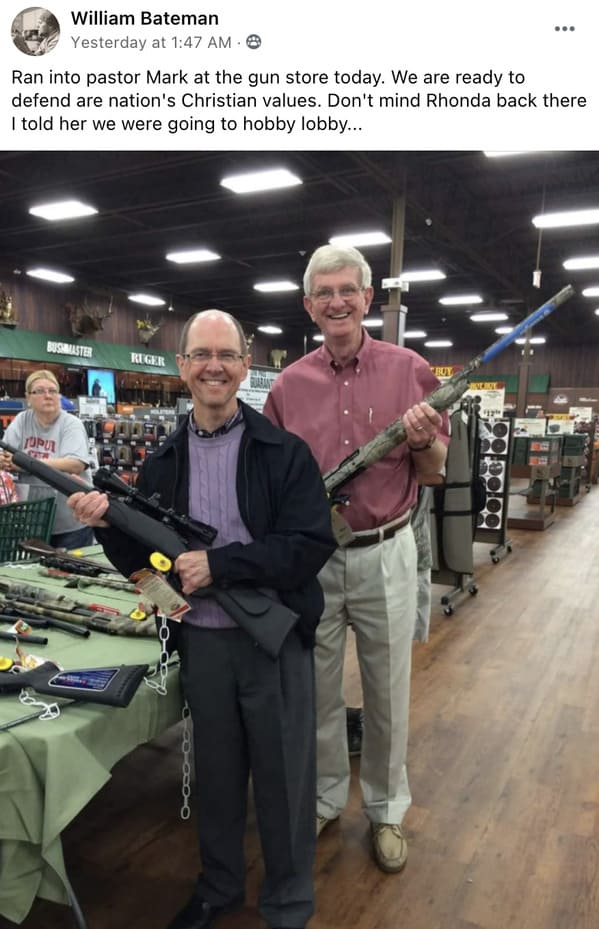 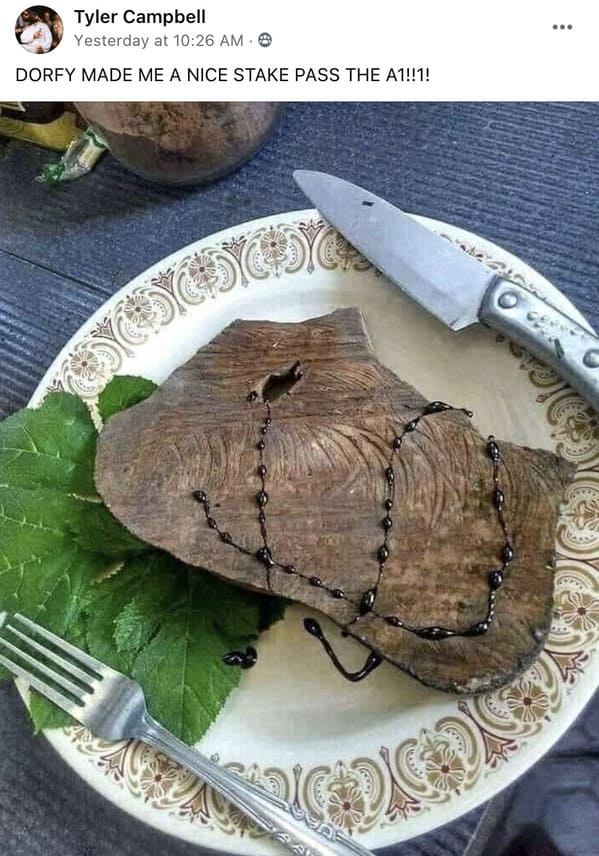 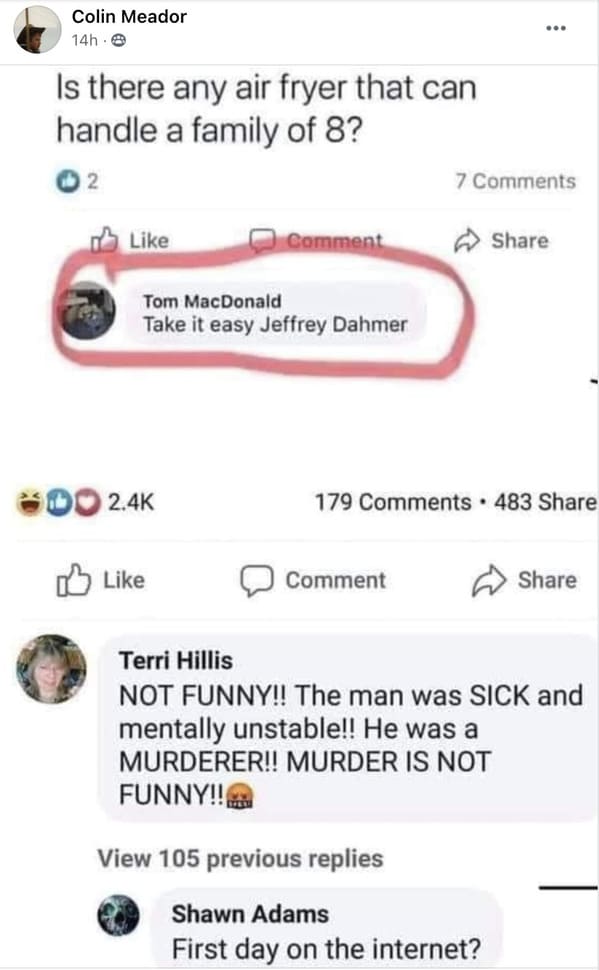 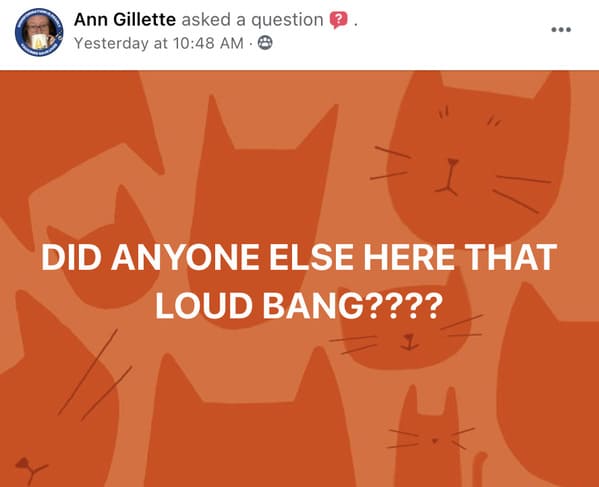 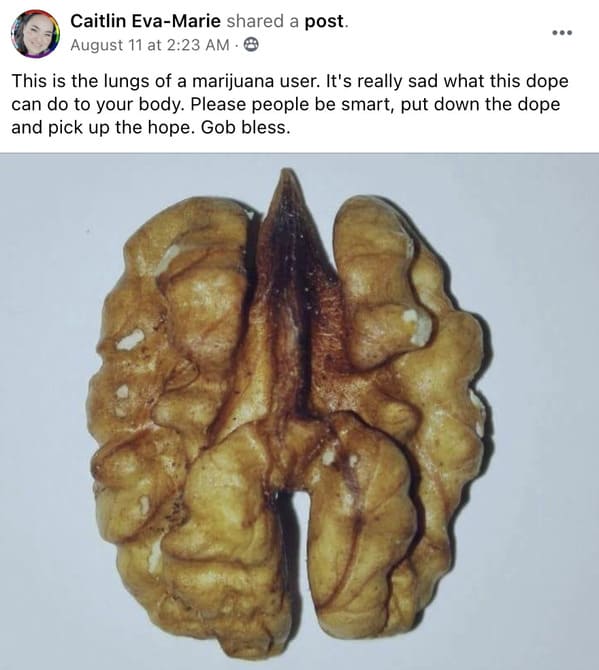 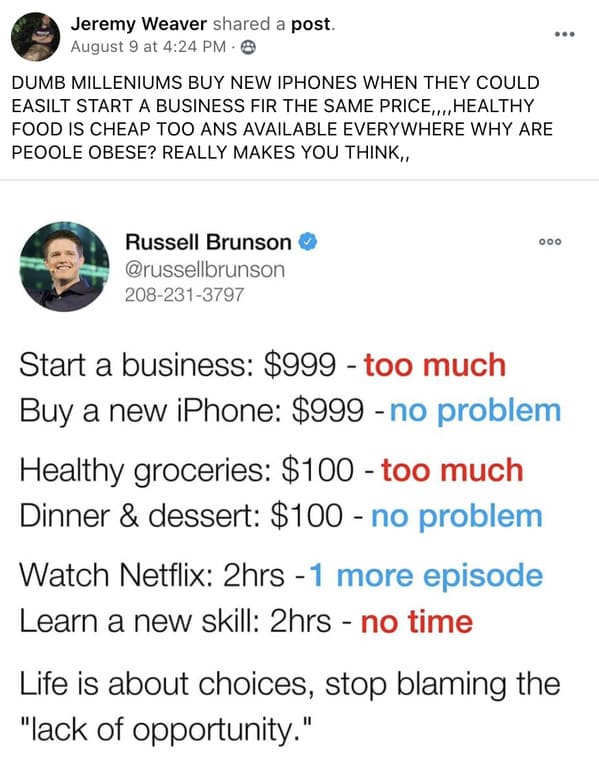 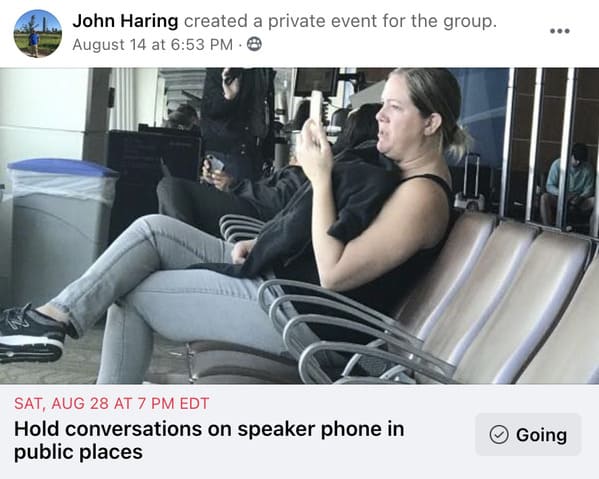 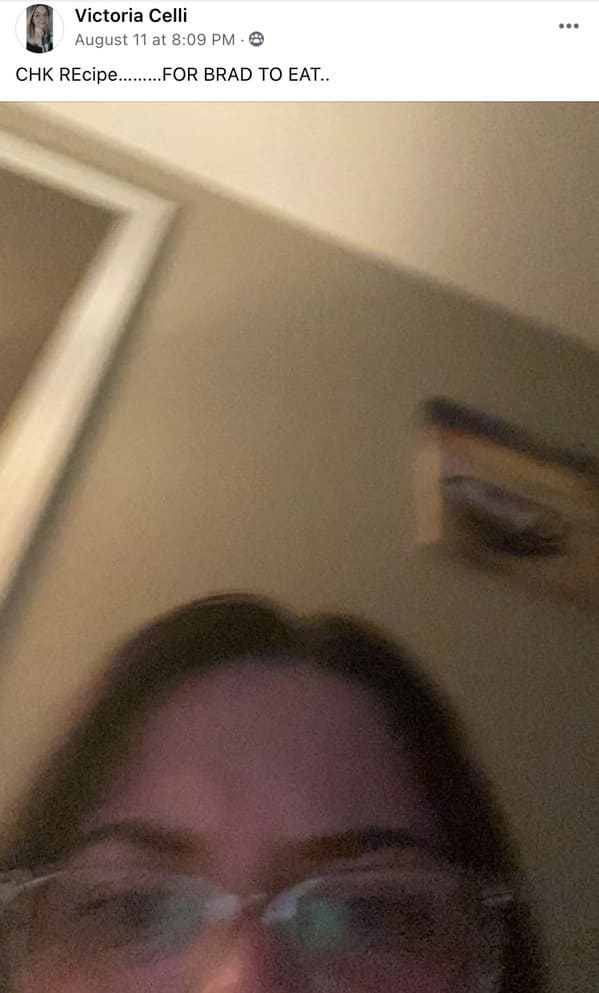 This is becoming a thread but i am genuinely cracking up over this shit pic.twitter.com/PfL7jBdKmc

This is my post but the comments have me ROLLING pic.twitter.com/LEatB2iL9Y

My favorite kind are the grim news ones with happy backgrounds f pic.twitter.com/gkx3QLlHa9

This page has saved my life pic.twitter.com/m8kQdMh2Mj

The group has taken over my life pic.twitter.com/aeWP9ihWTJ

WHY AM I HAVING SO MUCH FUN pic.twitter.com/ENK8C1nNHx

The thread instantly blew up as thousands retweeted @manhattanna’s post, commenting on how accurate it was and how much it reminded them of their own grandparents.

THIS IS LITERALLY HOW MUCH GRANDMA TYPES IM SCREAMING

this thread is god https://t.co/YmlNTmhTa0

Truly, the real boomers are nearly indistinguishable from the millennials posing as boomers.

This post is directly from my 57 yr old dad you guys are very accurate pic.twitter.com/fkjSzEKQxm

This is a real conversation with the boomer that birthed me pic.twitter.com/7EdKxCXTmQ

I don’t understand what this is, everyone’s just texting like my mom. pic.twitter.com/GNWwyFdY9m

Honestly thought my grandma got hacked the other day…nope. 😂 pic.twitter.com/K5wqhQ1S65

My dad found a new way to distribute his jokes pic.twitter.com/E3xQeXF2N7

The thread even prompted hundreds to join the ‘A group where we all pretend to be boomers’ Facebook group themselves.

I just joined!!!! I think it is my calling pic.twitter.com/iHOhoEZH1e

So do yourself a favor and run, don’t walk, to join the ‘group where we all pretend to be boomers’ before somebody (a boomer) gets offended (snowflake generation!) and gets shut down.