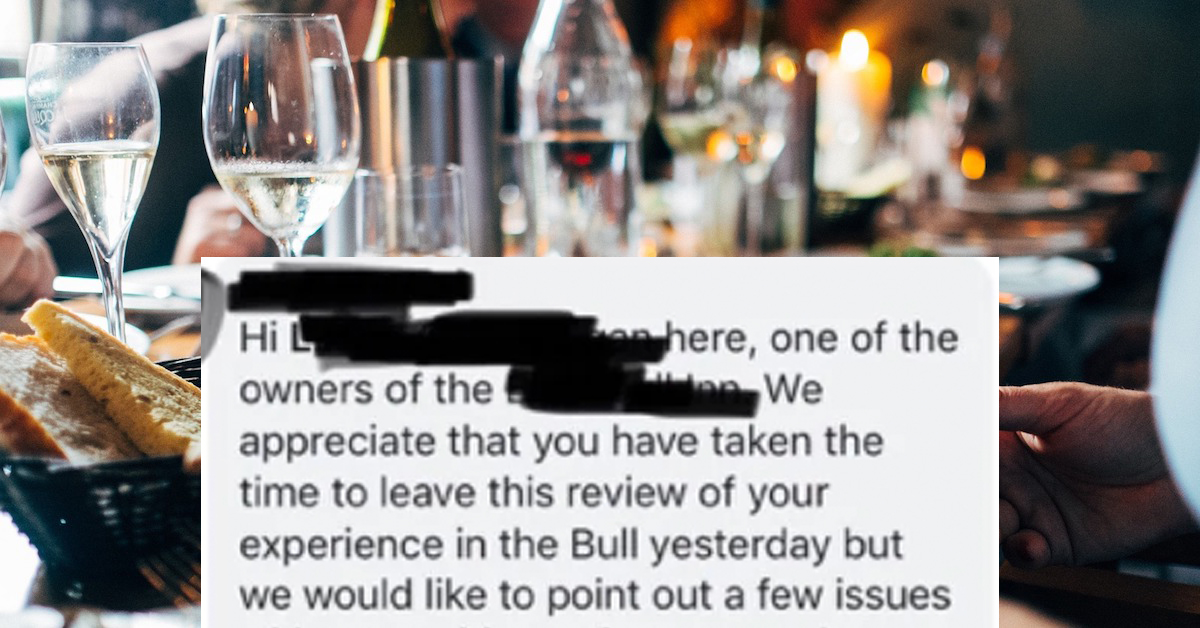 Sites like Yelp or Google that let people leave reviews for businesses are a godsend.

I rarely go to a new place, whether it be a restaurant, salon, or hotel, without first checking the reviews online.

Bad reviews are helpful to customers but harmful to businesses, obviously.

If a poor rating is deserved, then the site has done its job and given the unsatisfied patron a way of getting the word out to others. But sometimes people complain in order to get free stuff or just be vindictive and that’s not a reflection of the establishment at all.

One Irish restaurant received an unfair negative review, but instead of ignoring it, they checked the security camera footage of the incident. When the owner was sure the restaurant hadn’t messed up at all, they wrote a scathing message back to the customer. How much do you love when an annoying whiner gets put in their place? It’s such a delightful thrill.

The restaurant’s response was posted on Reddit without the customer’s actual review, but we can figure out what happened from his explanation of events.

The owner began by writing, “Hi, ______ here, one of the owners of the ______.” (The name of the restaurant is blacked out, but later the owner mentions “the Bull,” and one of the commenters said it was the Black Bull and that the owner had posted his response on his own Facebook page, too.) He continued, “We appreciate that you have taken the time to leave this review of your experience in the Bull yesterday but we would like to point out a few issues with your critique of your experience that you conveniently omitted from your review.” 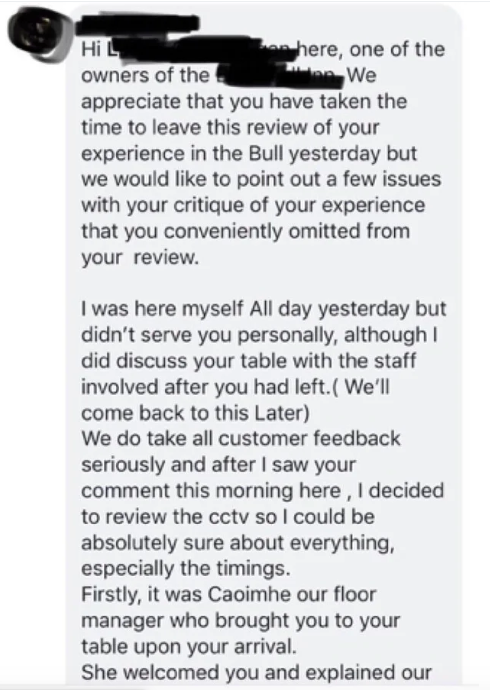 The response mentions that they checked the CCTV so they could be “absolutely sure” about the timing—the customer must have complained that service took too long, but according to the tape, nope, not the case. Who looks stupid now, customer? You do. 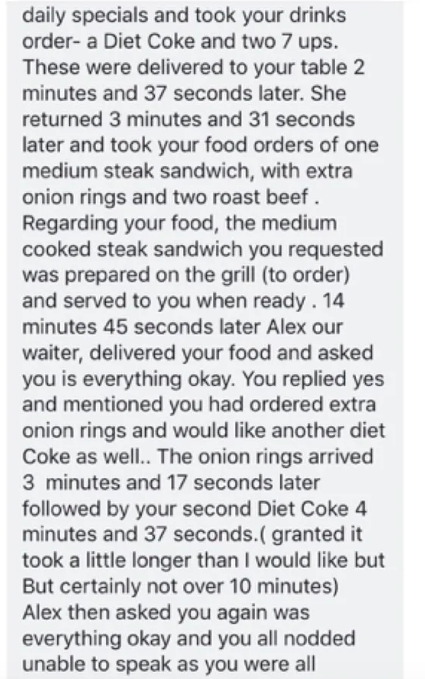 The owner goes on to say that the customer complained about the food—but not until after consuming all of it. Um, how bad could it have been then? 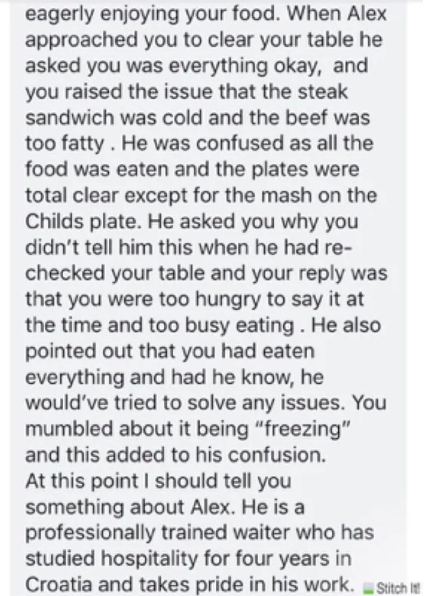 He also explains that the waiter, Alex (who is a “professionally trained waiter who has studied hospitality for four years”), asked them how everything was, giving them an open invitation to complain. They did not, instead just wolfing down the food. The customer complained that a steak sandwich was “freezing,” but Alex had just witnessed the meat come off the grill. 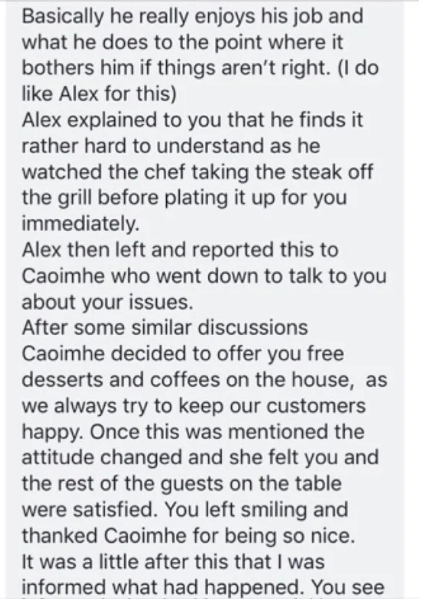 The person seemed satisfied with free desserts and coffees and even thanked them when leaving. But for whatever petty reason, they decided to change their minds when they got home and write a blistering review. 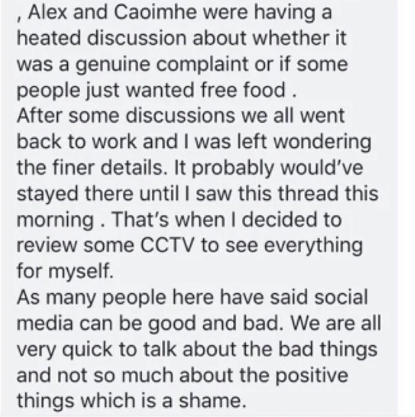 The restaurant owner admits that mistakes can be made but stresses that in this case (lol, “Linda”—the burn is just so much better when it’s personal like that) it definitely wasn’t their fault at all. YEAH, LINDA. 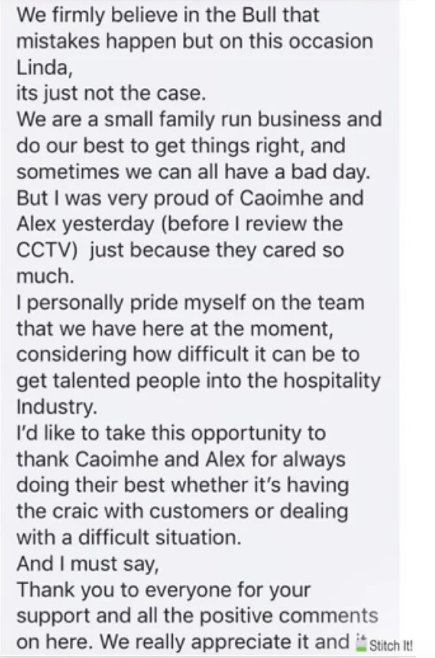 And they thanked all the people who’d left nice comments that truly reflected how the restaurant conducted its business. 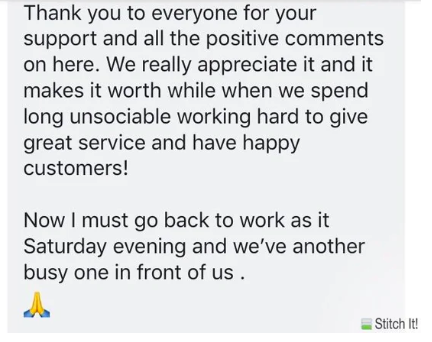 One person wrote, “Damn. I’m in the USA. After reading that response, I was going to message you and ask for the name of the restaurant. I’d eat at a place where the owner was so polite about a bullshit review and speaks so highly of his staff. I want to eat there!! And someone else wrote that they wished that there would be “consequences” so customers would “stop doing these trashy things.”

That’s not a bad idea—perhaps a way to review the reviewer?