On Monday afternoon, account @Fred_Delicious asked Twitter, “What is the most ridiculous name you’ve ever come across in real life?” He also shared his own: “I once met a kid who swore blind his friend’s dad was called Malcolm Powder”

What is the most ridiculous name you’ve ever come across in real life?

Within 24 hours, the tweet had over 10,000 likes, 1200 retweets, and 5600 hysterical replies to the prompt. So hysterical, in fact, that it led to these consequent tweets from Fred Delicious:

This is my favorite thing I've ever done on Twitter. 3,000 replies now and I've lost count of the amount of times I've cry-laughed https://t.co/E13NszJlHU

A big deal, considering he’s one of the funnier folks on the platform.

Without further ado, here are some of THE most ridiculous names people have ever heard IRL: 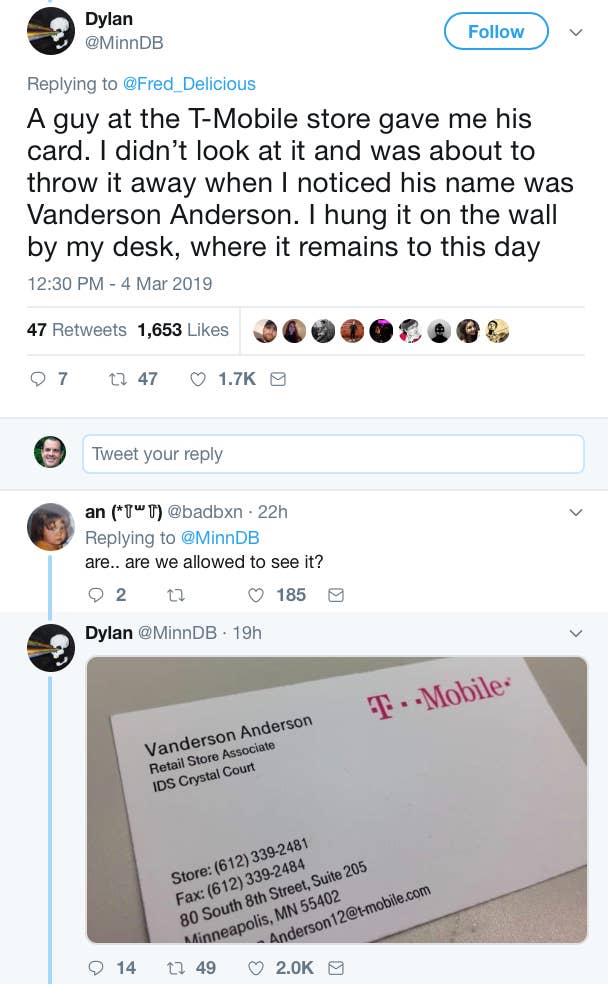 I once had a weird job digitizing score sheets for a deer hunting trophy (antlers) record book and one of the record holders was a gent named Dick Masterpole. I'll never forget that.

I met a Paige Turner once 🤷‍♀️

My father in law’s neighbour is called Cherry Pi. My dad’s cousin’s first name is Toggleabufnot. And I knew two brothers called Chris and Drew Peacock.

I once served a customer named Robin Batman. I had to hold my shit together for that one.

When I was in my early 20’s I worked at a gas station and a man paid with his credit card so I needed to check his ID. His name was Ronald McDonald and I laughed in his face. He was not as happy as the food clown one.