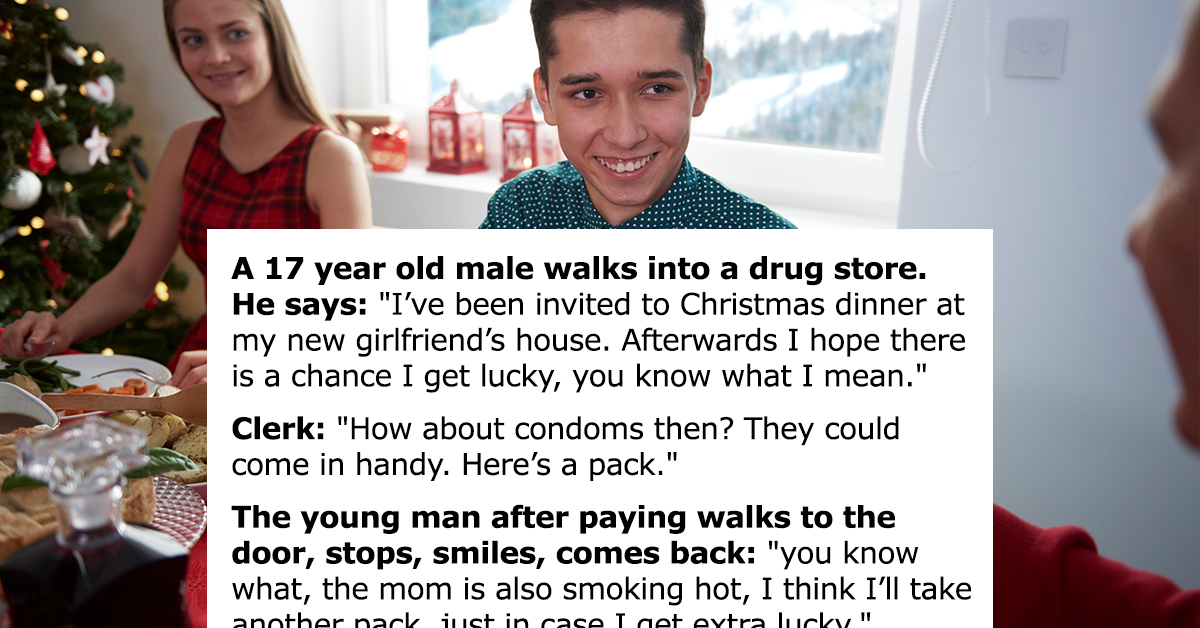 With the holidays fast approaching, you might be getting ready for a lot of endless and probably pointless conversations with folks you haven’t seen all year.

Some people cope by getting drunk in the laundry room. Others instigate political conversation, getting ready to sharpen their teeth on Racist Uncle Bob. And some tell jokes.

Lots of jokes. Some good. Most awkwardly bad. And some jokes just really dirty.
This year, Reddit asked what the best NSFW Christmas jokes were, and they got a ton of replies.

“On the first Christmas morning, the three wise men walk into the manger. The first one steps in donkey shit…looks at his shoe and exclaims ‘Jesus Christ’…Mary looks up at Joseph and says…”that’s a better name than Keith.” — vegemite_poutine

If she doesn’t like the slippers, she can go fuck herself.”

“Why doesn’t Santa have any kids of his own? He only comes down the chimney.” — what_me_nah

“Christmas was coming and Little Johnny’s Mom and Dad took him to the mall to see Santa Claus.

Santa, in complete shock, pulled Little Johnny’s parents aside and said: “In all my years, I have never seen a little boy with such a foul mouth.” His parents replied “We know, but we have no idea what to do about his behavior. We’ve tried everything.”

Santa thought about it and said, “Here’s what we’ll do to teach him a lesson, every place that Johnny asked for a present, we’ll put a pile of dog poop.” The parents agreed to try Santa’s plan.

On Christmas morning, Little Johnny woke up and immediately looked under his bed. Seeing the pile of poop, he ran downstairs to the Christmas tree and checked underneath.

Finding another pile of poop under the tree, he ran out the door and threw open the shed door. Finding a tarp in the shed, he quickly pulled back the tarp and found yet another pile of poop. Johnny walked out of the shed and started looking all around the yard. After a while, his parents asked him sarcastically “So Little Johnny, what did you get for Christmas?”

Without missing a beat, Johnny looked at his parents and said “I think I got a god damned dog, but I can’t find the motherfucker!”

“I went and bought a real Christmas tree. The bloke selling it asked me if I was going to put it up myself. I said No, you sick bastard, I’m putting it in my living room!” — BuckFuzby

“A 17 year old male walks into a drug store. He says “I’ve been invited to Christmas dinner at my new girlfriend’s house. Afterwards I hope there is a chance I get lucky, you know what I mean.”

Clerk: “How about condoms then? They could come in handy. Here’s a pack.” The young man after paying walks to the door, stops, smiles, comes back: “you know what, the mom is also smoking hot, I think I’ll take another pack, just in case I get extra lucky.”

Christmas eve comes around, the boy sits at the dinner table and doesn’t say a word. After a while his girlfriend says: “if I had known you were so quiet, I wouldn’t have invited you.” the young man replies “if you had told me your dad works at a drug store, I wouldn’t have come.” — owen2payne

“Twas the night before Christmas, and all through the house, Nothing was stirring, not even a mouse.

I should have bought a carbon monoxide alarm.”

“On the first Christmas morning, the three wise men walk into the manger. The first one steps in donkey shit..looks at his shoe and exclaims “Jesus Christ”… Mary looks up at Joseph and says…”that’s a better name than Keith””

“Two convicts had just been placed in cells besides each other on death row.

Convict #2: “I held up a convenience store and shot the clerk when he tried to pull a gun on me. You?”

Convict #1 says, “Well, last Christmas day my wife was working a double and all our kids were being little shits, yelling, cussing breaking stuff. Y’know, like the little bastards do. So I couldn’t take it and called my mother-in-law for advice. She told me to go out to the garage, get a bunch of empty boxes, wrap them up all pretty like with bows, and set them down under the tree then whenever a kid misbehaved grab one and throw it into the furnace. So i did.”

Convict #2: “What’s that got to do with your being sent here?”

“Why did the snowman drop his pants? He heard the snowblower was coming by.” — perkispowerhour

“Why was Dad upset that he got a sweater for Christmas?

Because he wanted a screamer or a moaner.”