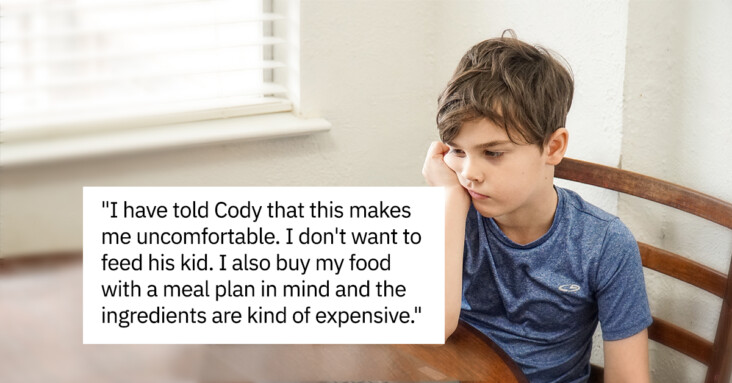 Living with roommates is complicated because there are different degrees of overlap. They might be your friends, they might be strangers from the internet.

They might be sloppy, and “forget” to pay the bills on time.

Maybe you share house supplies, maybe you count squares of toilet paper. Whatever you choose to share, it should be discussed. Especially childcare. Does that even need to be said?

A Redditor with the handle u/TechnoCoyote lives in a unique space she says in a “plantation-like house,” in which she has a suite with a private bedroom, bathroom, and small living room. There are two other families in residence, and everyone shares a kitchen with an individual locked fridge. There’s also a shared dining room/living space.

This was all fine and dandy until a man named Cody gained full custody of his six-year-old son, Dean.

Everyone was introduced to the kid and while the OP says she can hear him making noise sometimes, it didn’t bother her. He was polite and well behaved… except for one thing:

However, every time I come down to make food, Dean will come into the kitchen and watch me cook. He asks me if he can have some of the food. When I tell him no, he will say, ‘But I am hungry.’

I have told him that he needs to talk to his dad. Dean will go into his apartment and Cody will come out, annoyed, to make him something. Cody has asked me a few times, “Can you just make him a pancake?”

I have told Cody that this makes me uncomfortable. I don’t want to feed his kid. I also buy my food with a meal plan in mind and the ingredients are kind of expensive. So I have said, “Sorry, I don’t feel comfortable doing that. You should buy pancake mix.”

She says that Dean has also knocked on her door while she’s working to say he is “bored,” and she redirects him to his dad because she is not his mom. Things escalated on Valentine’s Day when the OP’s boyfriend brought over pizza and snacks for a little celebration:

Dean was in the living room watching TV, saw us with pizza and got excited. He got really upset when my boyfriend took it upstairs along with the bag of snacks and soda.

He asked if he could have some or watch the movies with us. I told him, “Kiddo, this is adult time for my boyfriend and me. Ask your dad to order a pizza.”

Dean looked like he was going to cry and went back to his apartment.

I got a call from the landlord asking for my side of the story and I explained what had happened. Cory has not spoken to me since that call, other than calling me a snitch. Dean gets picked up in the morning now by his aunt and spends the day with her instead of around the house.

The OP wants to know if she is the a-hole for refusing to parent a kid that doesn’t belong to her. Everyone seemed to be siding with the OP, even the people who would have caved and made the kid a pancake.

And most agree that she would have ended up being used for free childcare if she didn’t set boundaries and stick to them.

Fair point about removing incentives for the kid’s father to step in:

They’re also a little baffled as to why Cody would call her a snitch, when he clearly went to the landlord first. The OP said that her landlord didn’t describe exactly what Cody accused her of, but it was something like “bullying” his son:

In comments, the OP has said she is a 28-year-old petite woman, and Cody seems to have plenty of money, so the issue isn’t that his dad is too poor to feed him. The issue is that he saw a woman and thought she’d be delighted to play mom:

Don’t expect that anyone will take responsibility for your children except you, especially some random person who doesn’t even share your refrigerator.