In general, I don’t like to criticize the names people give their children unless they’re something deliberately offensive, like Tiny Adolf. Everyone has different cultural touchstones for what makes a good name and they might not align with mine. But this story is notable because even knowing all the outlandish stuff people name their children, I was still shocked. This is a bad baby name. That seems to be the common response.

This story was posted by u/alternate1357924680, and the OP admits it’s a throwaway account. She says she’s pregnant and married to a Vietnamese man. Her family is white. When they found out they were having a boy, they decided to give him a Vietnamese name her husband suggested: Van. They shared this info over a Zoom call with the folks, but her older sister made some disparaging comments about it:

Not outright malicious, but she said things like “oh you mean like the creepy kidnapper kind of van?” and “that’s a bit silly isn’t it”. I think she was trying to be funny but it annoyed me. I came back with “well its not any worse than your daughter’s name.” She was really offended. She asked what I meant and I told her she named her kid in the typical cringy-white-mom way. She got even more offended by that and told me I was way out of line insulting my niece like that, and dropped out of the call.

It was really awkward and my parents were like “you should have just let it go” but I don’t want her making fun of my kid’s name before he’s even here anymore than she wants anyone making fun of her daughter’s name.

For the record, I do think my niece’s name is sh*tty. I didn’t say anything when my sister announced it, though, because I didn’t want to be a dick, and I’ve never made fun of it before.

I know my response was immature but I don’t think my sister should dish out what she can’t take herself. AITA?

Blah blah, the sister is rude. Also, kinda xenophobic! But the real question everyone had was what is the little girl’s name? The people demanded to know, and she told us. 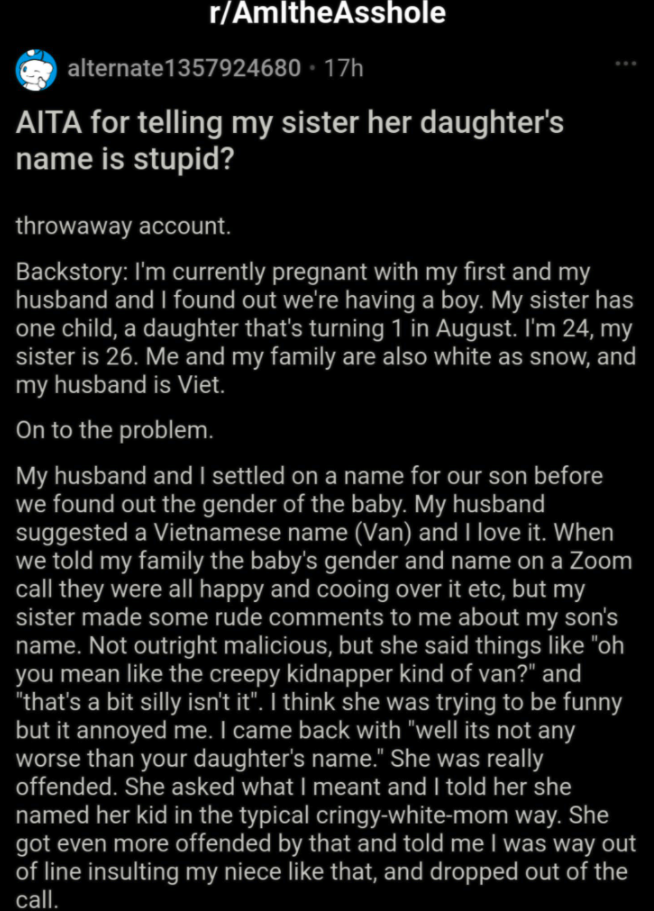 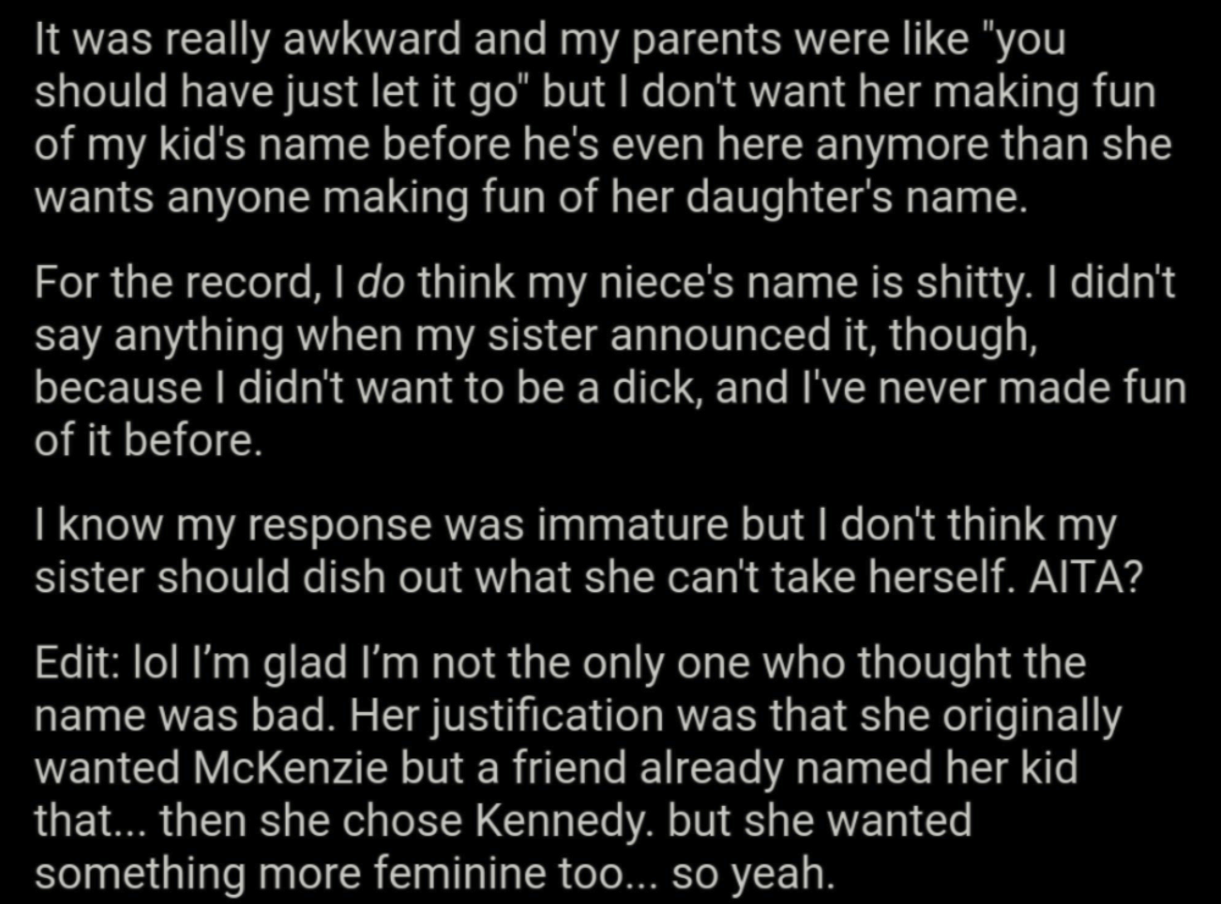 “I debated posting her name but I doubt my brother in law or sister even know what Reddit is so: McKennedeigh,” she replied in a comment. “Its pronounced ‘Mah – Kennedy.”

The story eventually made it’s way to Twitter, and everyone was screaming over this name:

I’M SORRY BUT WHEN I FINALLY GOT TO THE NAME I GASPED SO LOUD IAN HAD TO TAKE HIS HEADPHONES OUT TO CHECK ON ME https://t.co/orluPgsXsc

Her sister really went like this with her whole chest pic.twitter.com/b64dpFX3W6

I burst out laughing when I read “tragedeigh” ngl. pic.twitter.com/HziTBgmU7N

I can only think of a couple worse names I’ve seen. Luckily, they’re in a single screenshot, so here you go… 😂 pic.twitter.com/pVBeNcA2Fa

If it was the name of a book character, I wouldn’t read that book.

Would this be a macliabiliteigh suit?

It could be worse.

The OP appreciated the way people reacted to poor little McKennedeigh, and the support for her future son’s name:

The response lol I’m glad I’m not the only one who thought the name was bad. Her justification was that she originally wanted McKenzie but a friend already named her kid that… then she chose Kennedy. but she wanted something more feminine too… so yeah.

We have so many responsibilities to children. Give them something easy to spell for a start.