This is one of those stories on r/AmItheA**hole where the person is so obviously a giant a**hole that you wonder how they even manage to function in the world without being banished by everyone who knows them. It was written  by u/Big_Explanation_405,  who titled his post:

“AITA for telling my wife and daughter that if my daughter wears a two-piece bikini I will not take her with us to the lake the next time we go?”

Like, that about covers it, doesn’t it? Except when you read the post it’s actually even worse. He says his daughter is 15-years-old, which in his opinion is “way too young to be dressing in a two-piece.” He says his wife “agreed to let her buy one without my knowledge.”

It’s possible that there’s an age where a bikini is inappropriate, but I don’t know what it is. I’ve seen people of all ages in them, and I’ve also seen one-pieces that are more revealing in their own ways than a two-piece. The laws of bathing suits are different from the laws of regular clothing, because context.

I disagreed with his initial premise, but then his description of what happened made it even worse:

The last time we went to the lake, which was last week, after I had unloaded the boat and we’d started to pull out into the lake my daughter takes off her shirt and shorts and I see the bikini. I stop the boat and ask her and my wife why she is wearing a bikini. They tell me that it’s no big deal and that all of her friends wear them so why should she not wear one too. I tell them that she’s too young to wear something so revealing and I disapprove. I tell her that either she covers up or I will take the boat back to the ramp, so she agrees, mostly because some of her friends were there and she didn’t want to ruin their trip.

Afterward, he says his wife and daughter expressed their displeasure and told him he needs to “get with the times.” He said he doesn’t care what her friends or anyone else wears, he thinks there’s no reason his daughter should “wear something like this.”

I told them both that next time if she did not wear a tankini, one piece or something that covered her up more she would not be coming with us to the lake. She would stay at home or else I would refuse to get the boat out and we would all stay home.

Then he asked for Reddit’s opinion. Their opinion of him was bad.

Most people felt like the OP was the one sexualizing his daughter’s body, not the two-piece. His reasoning makes no sense, because wearing a certain bathing suit is not like reaching voting age or being allowed to drink. What does one year make a difference? Why is her stomach showing so sexy to him? Please, stop being a creep, dad! And why does what he say goes when his wife has a different opinion? 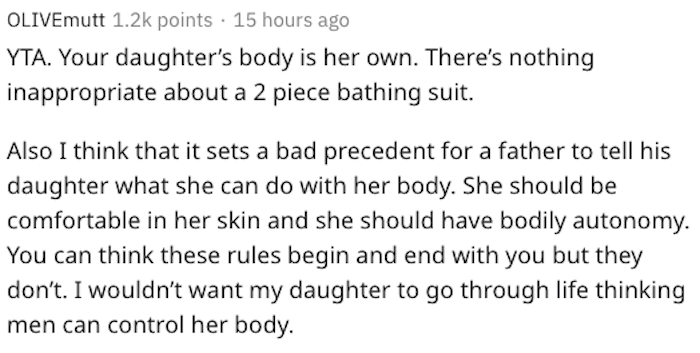 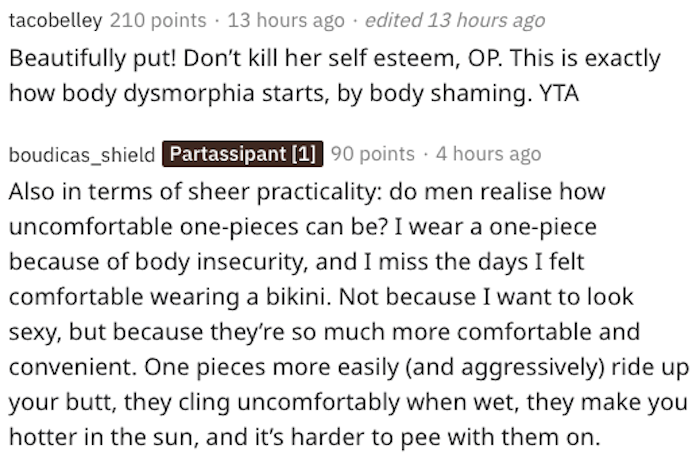 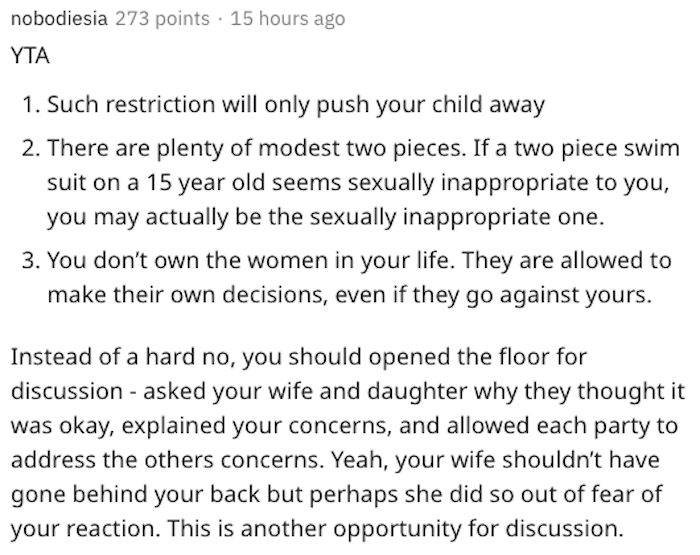 I doubt someone with this perspective will have it changed by Reddit, but I do hope he reads all the comments and know it’s not just his wife and daughter who think he’s an a**hole. It’s probably everybody.