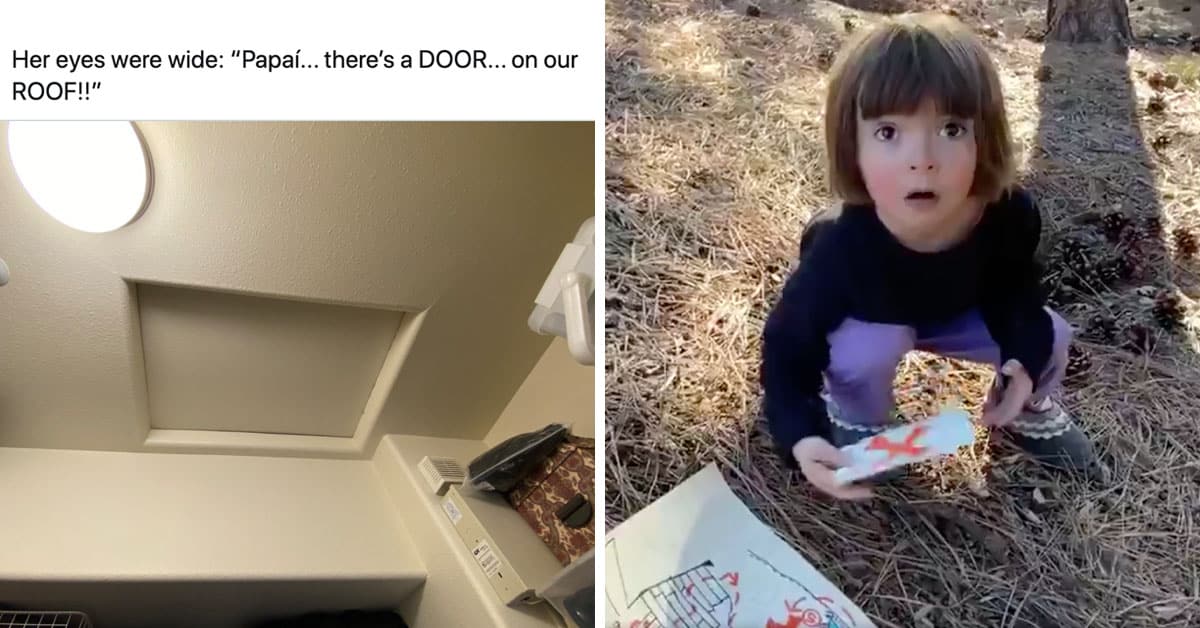 Everyone loves a good Twitter thread. It’s the internet’s version of a campfire story (sad but true) and people love to see it play out tweet by tweet and scene by scene as the suspense builds to a hopefully satisfying conclusion.

One story time thread that captured people’s imaginations recently was posted by a father named Jason Robinson and detailed the fantastical adventure he went on with his 3-year-old daughter Emma when the child discovered a hatch in their ceiling and demanded answers.

What happened next was… well we’ll let him tell it.

A few of you may remember that my 3yo discovered a door in our ceiling, and has been asking about what’s inside.

Her eyes were wide: “Papaí… there’s a DOOR… on our ROOF!!” pic.twitter.com/tPmVt4DVxh

Being the self-aware homeowner that he is Robinson already knew what was behind the door, and it was underwhelming.

I’ve been stalling for a few weeks, but I told Emma we’d get a ladder and climb up there to see what’s behind the door.

I happen to know there is… an OLD RUG up there. Meh.

But instead of letting his kiddo deal with the boring old disappointment of reality, Robinson got an idea and sprang into Dad Mode to carry it out.

Secret doors need TREASURE though. So, I went to Claire’s at the mall, and bought the SPARKLIEST little treasure box I could find.

The photo doesn’t do it justice, it’s not “rose gold”… it’s both PINK and GOLD, in the most un-subtle of ways. pic.twitter.com/mNiwcUC8jK

Stashing a treasure chest for his little girl wasn’t enough, Robinson was determined to make it an experience to remember.

So, that’s going to be sitting up there, locked.

It will also have a TREASURE MAP taped to it.

I mapped the little park-y area in front of our apartment, with landmarks she’s familiar with.

Let me go find it for you. BRB.

(Also, I should have clarified previously: my trip to the mall was BEFORE all the social distancing. We are well, and properly sequestered.) pic.twitter.com/x4nB5HtyxX

In order to open the box and claim her treasure Robinson’s 3-year-old would have to undertake an epic quest through the backyard, following a series of clues.

The map (drawn by my mother in-law! 🥰) Marks a path of four familiar landmarks that Emma will know… pic.twitter.com/XiYC4N1d0n

Pardon me while I go hide THIS ENVELOPE (which contains the key to the box) in the tunnel. 🤫 pic.twitter.com/kslLuNMtgx

Like any good storyteller, Robinson built tension by stopping mid-story on a cliffhanger, providing a shot of the treasure chest as it waited patiently to be discovered.

Alright. Quest is set to begin. I’ll update you all later…

Then the camera started rolling and the story became a film.

So, the adventure was NOT disappointing.

This GIF about sums it up though — the moment Emma placed the envelope on the map and realized it HAD THE SAME X! 🥰 pic.twitter.com/CDqQFvAt57

Here is the moment she discovers the key 😂🤣! pic.twitter.com/PvcfTUyKOj

At last, the treasure was unlocked

“What is ‘mysterious places’”? pic.twitter.com/nOqG9Q3v2X

Robinson’s daughter Emma wisely attributed the adventure to her being a “great finder”…with a pretty decent dad, we might add.

Thanks for following us on this little adventure!