What to do about old, homophobic relatives? In most instances, I’d say, “Disconnect from them!” There’s no reason to subject yourself to someone’s bigotry just because they’re old. Unfortunately, things are usually much more complicated than that when it comes to family. This is especially true when money comes into it, as it did for the family of Redditor u/ThrowAwayz201301, who shared his conundrum after getting into a fight with his wife.

He says he’s in his forties and has a 17-year-old niece, who recently came out as a lesbian. The OP says he’s been very supportive, but when she said she planned to imminently come out to the “whole world,” he told her she should “absolutely wait” for her grandparents to die first.

Not because he cares about their feelings! But because they’re sitting on a ton of money:

My father is a raging homophobe who has flat out stated any gay individual in our family would be written out of the will. And to make sure the rest of us don’t just split more money with said gay relative, they will, instead, have that portion of the inheritance (put aside for that family member) donated to charitable causes. That money will be erased from the inheritance.

Since both my father and mother are incredibly poor health, (stage 4 cancer and debilitating dementia respectively) I told my niece she should stay in the closet for a while longer. If she comes out as a lesbian and they find out, she will quite literally lose out on 7 million dollars.

The OP says once he told his niece about the potential inheritance she seemed “a little sad” but also seemed to appreciate knowing about it. Seven million dollars can change your whole life, obviously. But this didn’t go over too well with his wife:

I have also seen my father’s will and know who is getting what, so my niece IS definitely going to receive 7 million as long as my father doesn’t rewrite or edit his will.

Am I the a—hole for telling my niece to stay in the closet so she can be a millionaire?

Most people understood why his wife was upset, but overall they didn’t think the OP had done anything wrong. His niece can still decide to come out and forgo the millions of dollars if her grandpa finds out. Now she is just making a more informed decision, instead of being surprised by her disinheritance: 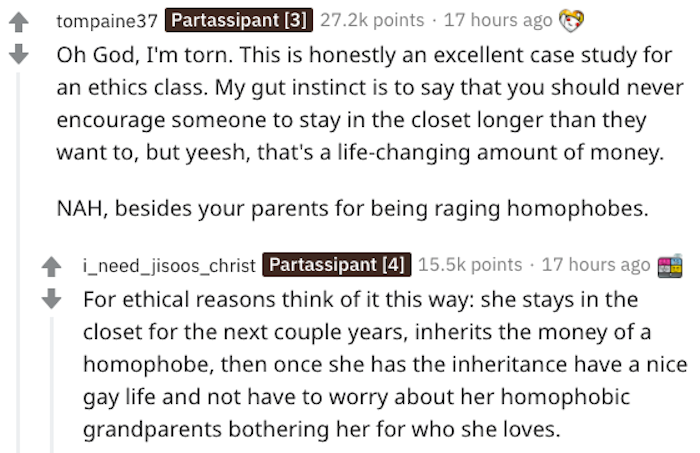 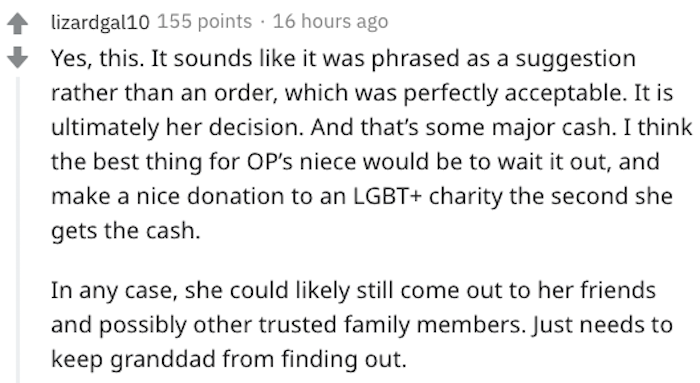 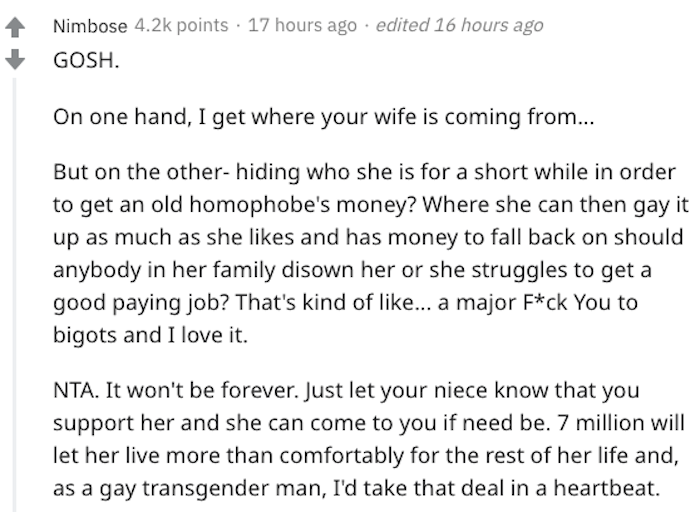 And apparently his wife thought about it and came around, because he shared this edit:

Small update: my wife apologized for getting snippy with me and now agrees she should hide it for a year or two. She is a powerful advocate of LGBTQ+ rights so she had an angry knee-jerk reaction to my dad’s bigotry.