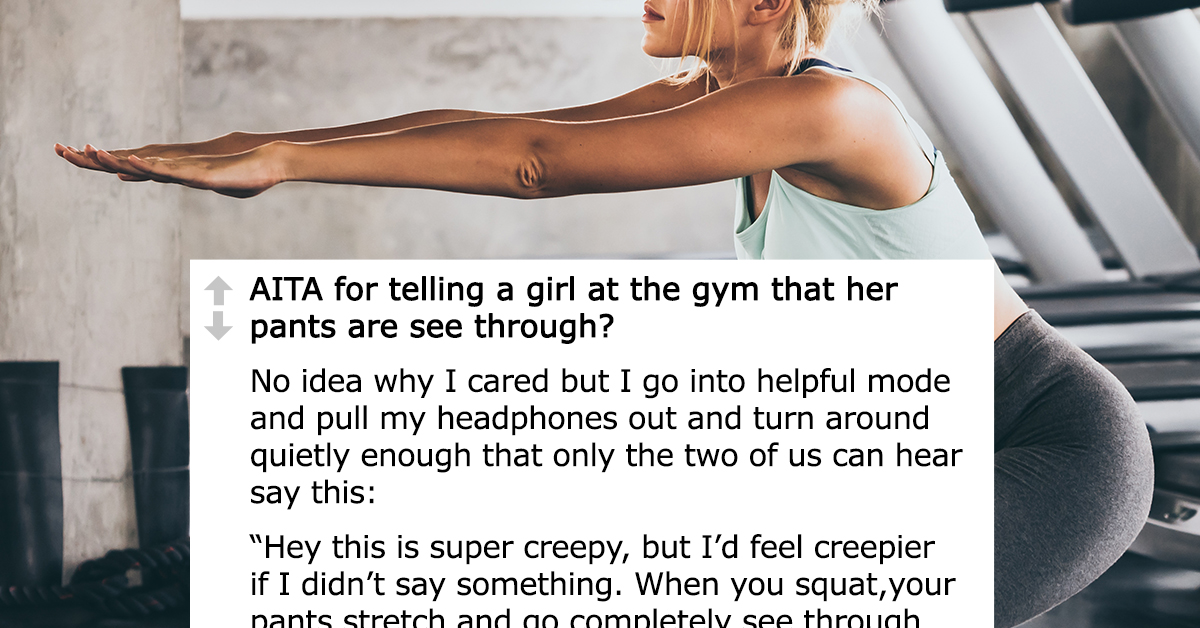 It’s the thought that counts. Or is it? In a recent thread on that oh-so-introspective subreddit Am I The Assh*le? a Reddit user wondered if he was wrong to tell a woman in his gym that due to the flimsy nature of her yoga pants he could see her entire ass when she was doing squats.

The man’s fellow gym-goer did not take kindly to the good-natured remark, reportedly calling him a “f*cking pervert” and commanding him to avert his eyes from her behind.

The exchange apparently went like this, according to GoldenFox7 himself:

“Hey this is super creepy, but I’d feel creepier if I didn’t say something. When you squat, your pants stretch and go completely see through on your ass.”

Again I thought I was being helpful and that she’d want to know, but wholly shit did she not see it that way. This girl practically screams “You fucking pervert! Stop staring at my ass!”

Not needing to be told twice now that half the gym is staring at me, I go back to my workout and suffer the angry looks for another 20min and go home.

While the gym rat’s note of caution didn’t go over so well, folks on Reddit were divided on his actions. Was the poster The Assh*le? Or in fact a concerned and good-hearted citizen? The debate raged like a roid-filled powerlifter.

Some said they’d have appreciated the word of warning and that the original poster (OP) was decidedly Not The Assh*le (NTA).

Same. I’d be embarrassed but I’d graciously take the heads up and get the fuck out of there…or at least stop squatting.

NTA – I would definitely want someone to tell me if my pants were see through when I moved haha . If she already knew and didn’t care she could have just said thanks and left it. You are not a pervert for noticing someone’s wearing see through clothing

NTA- You were completely right to let her know. As a 26 yo female I would want someone to tell me if my ass was showing. Its kinda like if someone has a booger or something in their teeth I personally appreciate when someone lets me know. It was probably embarassing for her but that was a huge overreaction on her part. Maybe she likes people gazing at her anus 💁 to each their own I guess but nah OP the only asshole in this situation is the one she was showing the world.

Some thought that while the concerned weightlifter was NTA he could have been more tactful about it and shouldn’t have begun with the word “creepy” or mentioned her body parts.

NTA. But you should have said: sorry, I don’t know if you’re aware but your pants are very see through. The word ass made it more embarrassing and sounds more sexual, how you put it made it a lot more blunt then it had to be. –miss_dylan

NAH – I get that you were trying to help but:

NTA, but the way you said it made it kinda creepy. In general, if you tell people how to react, they will react that way. Also, by being so blunt about it, it comes across as creepy. “Excuse me, ma’am, I’m sure you don’t know, but your pants are see through when you squat.” First, you’re giving her an out (I’m sure you don’t know) and second, you’re making it about her clothing rather than her body.

TA, but don’t start by saying “this is super creepy” and finish by mentioning her ass.

You might think you were pre-emptively avoiding creepiness by mentioning it first, but you actually emphasized it.

Also, just say the pants are see-through. No need to mention the body parts exposed.

Most people weighing in were on the poster’s side and agreed he was NTA despite some thinking he delivered his message poorly.

More people wondering whether they totally screwed up: