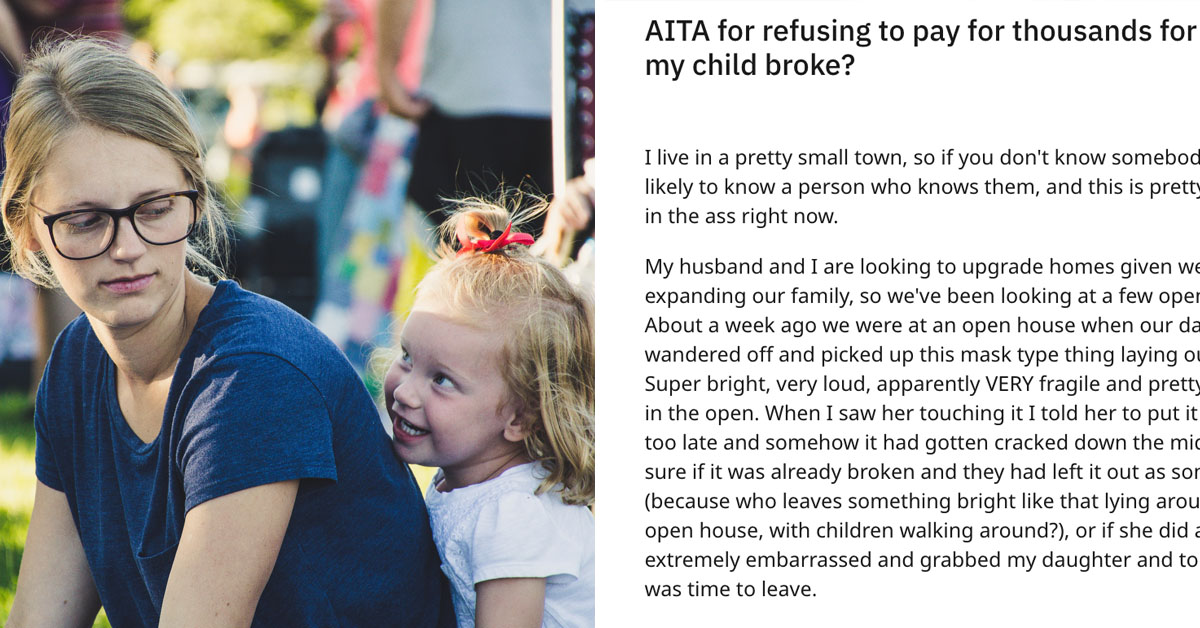 If there’s one thing all parents know, is that toddlers can be real terrors. They love to color on walls and crawl into forbidden spaces and touch things that they’re not supposed to touch. Basically, they always find a way to make a mess. That’s why most parents know to keep an eye on their kids and take responsibility for their messes. But, one mom apparently never learned that lesson.

A mom is refusing to pay for an expensive piece of art that her 4-year-old broke at an open house.

The mom posted her story in Reddit’s “Am I The Asshole?” forum to find out if the public thinks she’s in the wrong.

The mom explained that she and her husband are looking to upgrade their home, so they’ve been visiting open houses in the neighborhood. They recently brought their daughter to one. She explains:

About a week ago we were at an open house when our daughter (4) wandered off and picked up this mask type thing laying out on a table. Super bright, very loud, apparently VERY fragile and pretty much right out in the open.

She told her daughter to stop touching the mask, but it was apparently “too late”: there was already a big crack right down the middle of it.

Now, I’m not sure if it was already broken and they had left it out as some sort of trap (because who leaves something bright like that lying around during an open house, with children walking around?), or if she did anything, but I felt extremely embarrassed and grabbed my daughter and told my husband it was time to leave.

The family lives in “a pretty small town, so if you don’t know somebody directly, you’re likely to know a person who knows them,” and the mom says that’s “biting me in the ass right now.”

After the family fled the scene of the 4-year-old’s crime, an acquaintance told the homeowner that they saw the family rushing out of the house. The mom says:

Now she’s hitting me up on the phone demanding I pay her back for breaking “art” and naming an absolutely ludicrous price (think four figures). I’m absolutely not going to pay her that, but a few people I know think I’m in the wrong here.

She’s refusing to pay for a number of reasons, including thinking the mask shouldn’t have been left out and that the homeowner is just trying to guilt money out of her.

I personally think if you’re having an open house that children will be visiting you don’t leave expensive breakables out in the open. I also do not believe for a second that thing was worth thousands of dollars, and if it was, I think there’s a very good chance she broke it herself then left it lying around to pin it on someone else and guilt some money out of them.

The Reddit post has received over 4,000 comments, most of which are people telling the mom that she is, in fact, the asshole.

YTA. You were in someone’s home and it was on you to watch your kid. Otherwise, whatever she breaks is your responsibility. Get a toddler harness or something.

Also, why did you just leave without even trying to apologize?

It’s also very unlikely that a woman trying to sell her house left out something that was broken, hoped a kid would handle it and then she could hit people with the bill. It’s way more likely she was displaying something nice because it made the house look posh, the way people put fresh flowers in a house they’re trying to sell, and your kid broke it.

YTA and you sort of know it: If you didn’t think you’d done anything wrong, you wouldn’t have felt the need to immediately flee the scene.

Don’t let your child walk around someone else’s house unsupervised. If they can’t be trusted not to grab items then either don’t take them to an open house or keep them by your side.

YTA. You brought your child into someone else’s home and allowed them to break something. Then you ran away. You made no attempt to own up to or apologize, though You knew you were in the wrong. That alone makes you an asshole.

Whether you consider something art or not does not decided it’s value. Your child broke an object. You pay for the object.

Trying to blame the victim for the damage you’ve done by claiming it’s a trap is doubling down on being an asshole. Professional stagers (consultants who advise on how to make the house for sale look more appealing) would recommend a single striking piece on a wall or coffee table. Visual appeal without looking cluttered.

You should pay for the damage your family has done.

The mom definitely got an answer to her question. Now, the next question is whether she fixes the situation by paying for the art or flees Reddit just like she fled the open house.