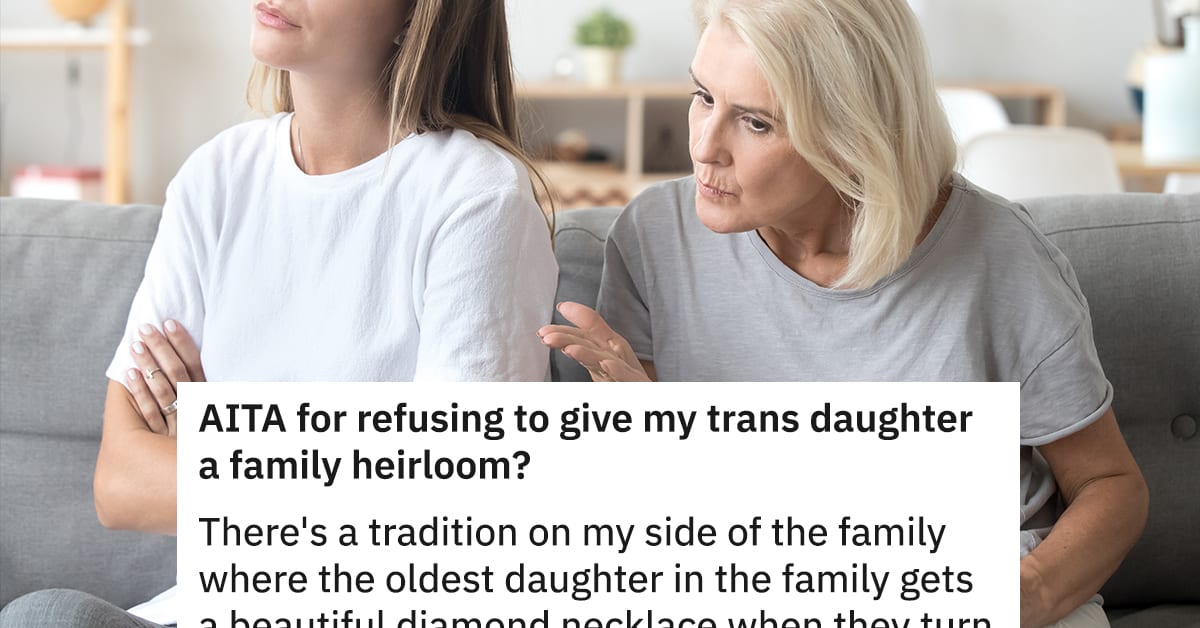 Even the most well-intentioned parents can fall into situations where someone is going to get hurt no matter how things are resolved.

A mom using the name u/familyheirloom321231 on Reddit found that out firsthand, and turned to the internet for advice on how to navigate some tricky waters.

The woman shared that her family has a long tradition of passing a specific necklace down to the firstborn daughter.

Her 17-year-old daughter, Susan, recently asked if she could wear the necklace to her junior prom.

“I told her she could and joked that it doesn’t matter because in a year it will be hers,” she wrote.

But that’s where things got complicated. Susan is the middle child, and the oldest child, Jessica, came out as trans four years ago.

As the oldest daughter, Jessica felt that she was entitled to the necklace, something the mom admitted she had never previously considered, as she spent 13 years thinking of Susan as her oldest daughter.

“This made us all quiet and I didn’t really know what to say as I’ve never really thought about it since I always planned on giving it to Susan,” she wrote. “After thinking for a few seconds, I told Jessica that I have always planned on giving it to Susan and it wouldn’t be fair but since circumstances have changed I am willing to go with you to a jewelry store and get you something equally special.”

“This did not satisfy Jessica as she got progressively ruder to me,” she shared. “Jessica being rude to me and our fighting led Susan to say some very transphobic things to Jessica (which made her walk away and cry) that I don’t wish to repeat.”

“I’m at an impasse. My [spouse] and I really don’t think giving Jessica the necklace would be the right thing to do. AITA?”

People weighing in were largely sympathetic to her plight.

“You’re all in a difficult situation,” wrote u/PooPulls. “Your trans daughter feels it’s yet another instance of her being considered less than a woman. Your female born daughter feels it’s being unfairly removed from her and you didn’t consider this possibility because who can really foresee this.”

“This was Susan’s birthright and it’s been coming to her her whole life. You can’t take that away because of the other child’s transitions and life journey,” added u/rhetorical_twix. “Susan is your first born daughter. Jessica, by transition, because your second daughter after birth.”

And many took the opportunity to warn against traditions that leave family heirlooms to older children.

“As a younger sibling in a family with a long history of passing down something (a name) to the firstborn…I’m not a fan of these traditions in general,” wrote u/tonytwostep. “IMO it makes the firstborn (and their subsequent firstborn) feel like the ‘true’ inheritors of the family history; it forges a close relationship between the parent and the firstborn, at the expense of your relationship with the other children.”

“But in all seriousness…traditions that solely focus on one child over the others are kind of stupid. You’re just asking for your other kids to start to resent you and the Chosen Child,” u/batnat711 chimed in.

At the end of it all, everyone agreed there were ‘No A-holes here,’ just a difficult situation for any family to be in.