You’d think that being in lockdown for months, people would learn to let small things go and really appreciate the moment. It’s never been clearer that the moment is all we have. Unfortunately, there is a certain kind of person who takes that message and interprets it as “I must obsess over this small thing because it’s all I have.”

That seems to be the case for u/anonymous28538382348 who posted on subreddit r/AmItheA**hole under with the question, “AITA For Going To The HOA to Force My Neighbor to Take Her Frog Statuette Down.”

She wrote that she and her husband have been going on walks since the coronavirus hit, and they take the same route everyday. They like it because it’s two miles without many cars. But things couldn’t stay idyllic forever:

Recently one of our neighbors put up a frog statuette up for display outside their house. I find it really creepy and so does my husband. My daughter hates it. She is absolutely terrified of it. Now She refuses to go on walks.

Earlier today I went to the house to ask them to move the statuette so it is no longer on display. I knocked on the door and a middle aged man, maybe 55, opened the door. I told him the situation. He seemed sympathetic, but he said that he and his wife really like the display, so they won’t be taking down that statuette.

She did share the statuette for everyone to see, and it’s not doing anything sexual or racist, it’s just sitting there being a frog: 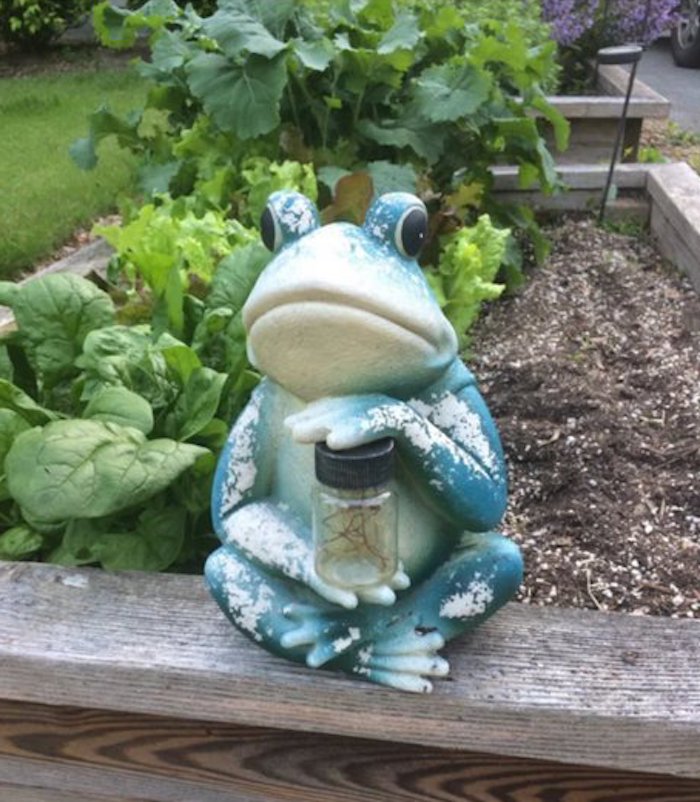 Most people would not even go so far as to complain about the frog, but this is a woman with no boundaries. Having been unable to control the couple’s front yard by invading their property, she took it to the next level, her next-door neighbor:

He is the vice president of the HOA so I was wondering if he could force them to take the statuette down. He said that the statuette might be a violation of the HOA bylaws. He went to look at it and sure enough it is. Now they’re being forced to take down the statuette and are being fined for violating the bylaws.

My husband says that I took it too far. I see it differently. The statuette is destroying the aesthetics of the neighborhood and is scaring the children. AITA? 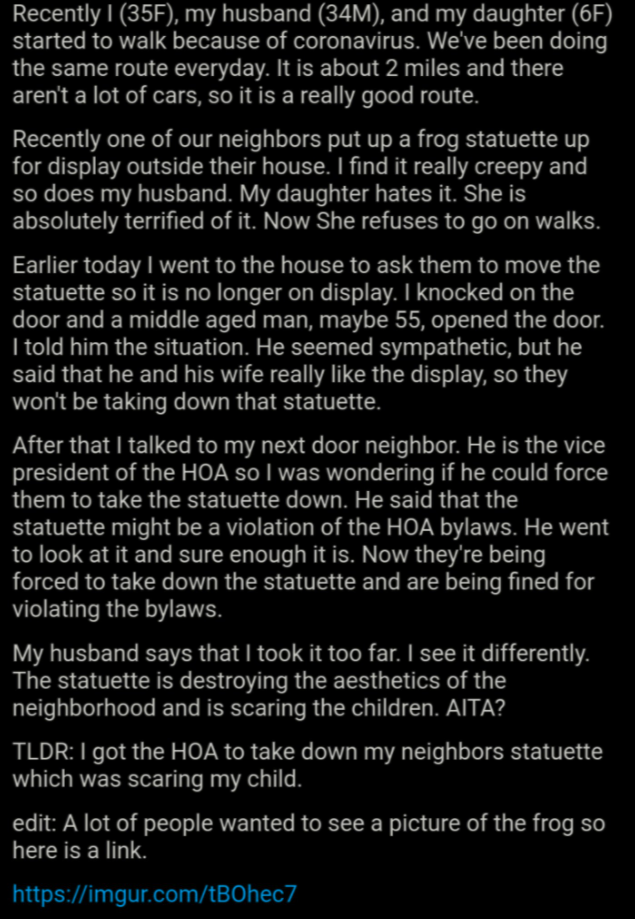 Notice how she says “scaring the children” when she means scaring her one child.

There are a lot of solutions to this issue that don’t involve getting someone needlessly fined during a pandemic, like taking another route, crossing the street, or actually doing some parenting and explaining to your kid that they don’t need to be scared and helping them work through it. This approach is only teaching them that complaining is the answer to everything and that they should get to control other people’s lives for their own convenience.

The comments had no mercy: 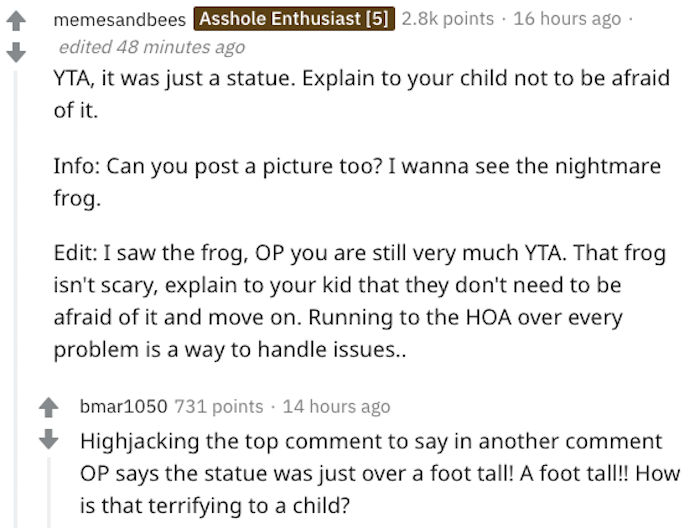 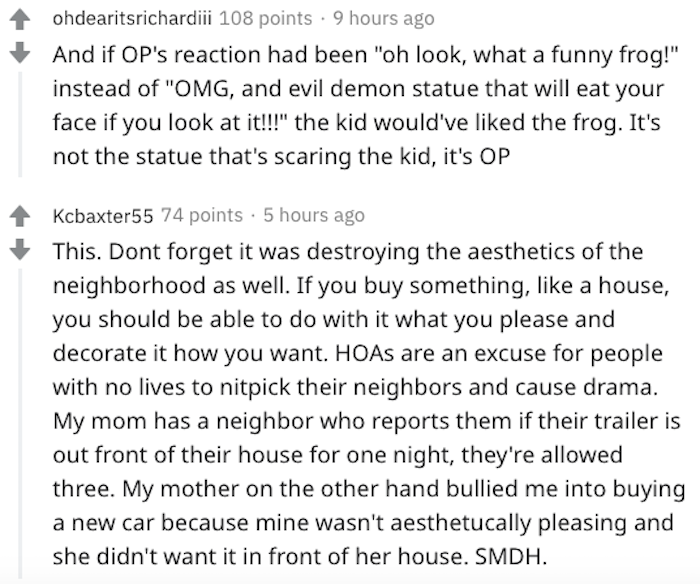 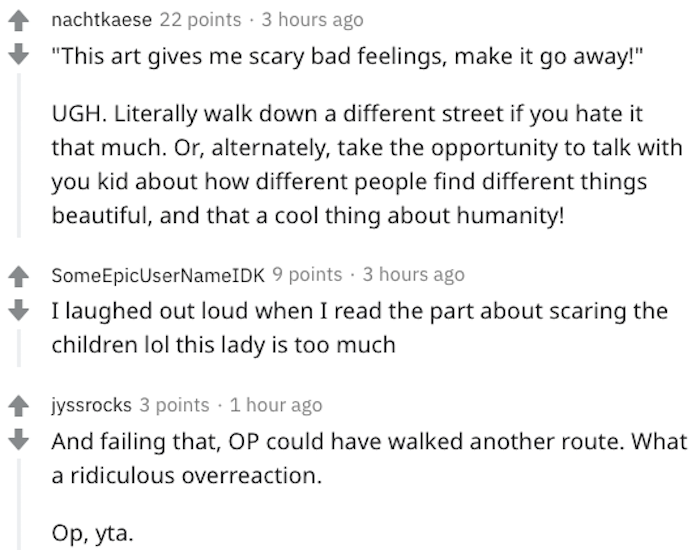 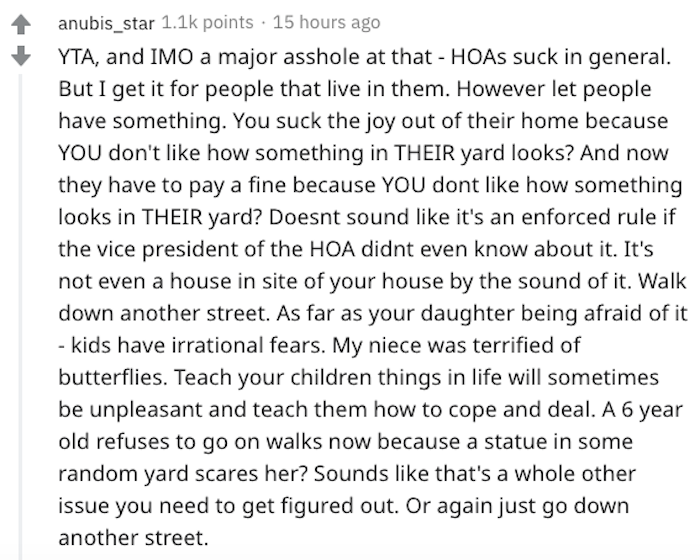 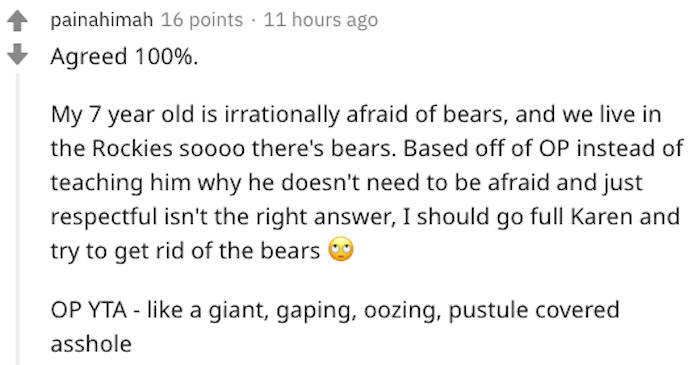 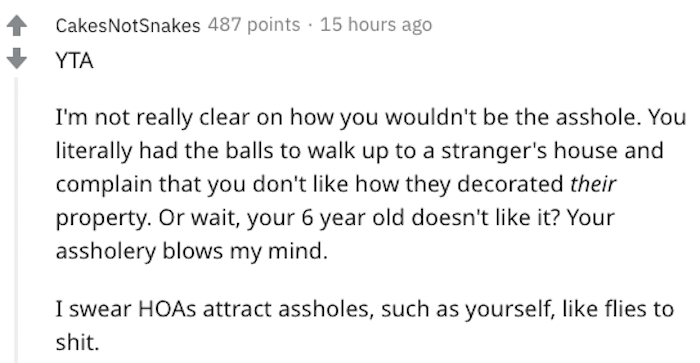 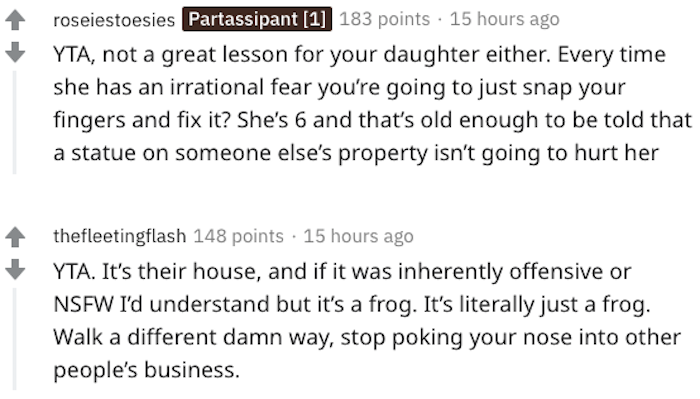 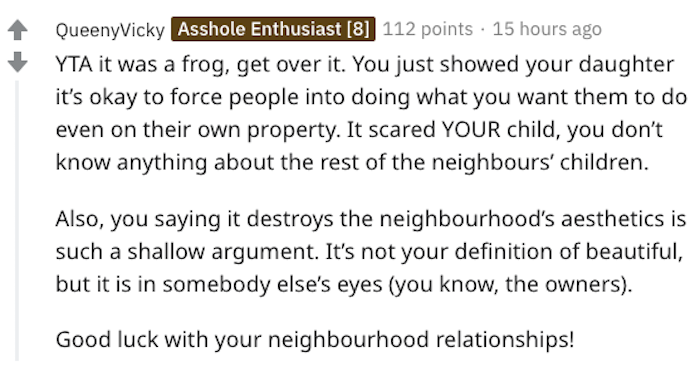 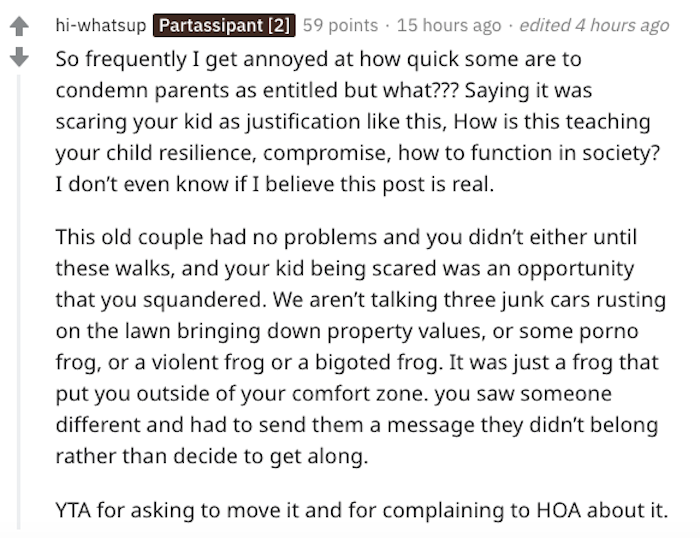 I’m pretty certain that the home owner’s association was developed for the kind of people who can’t discuss problems like mature adults, or self-soothe when they’re disturbed by lawn ornamentation. So, in a way, she is right: this is exactly what her neighborhood is about. Except it’s the HOA that’s creepy, not the frog.