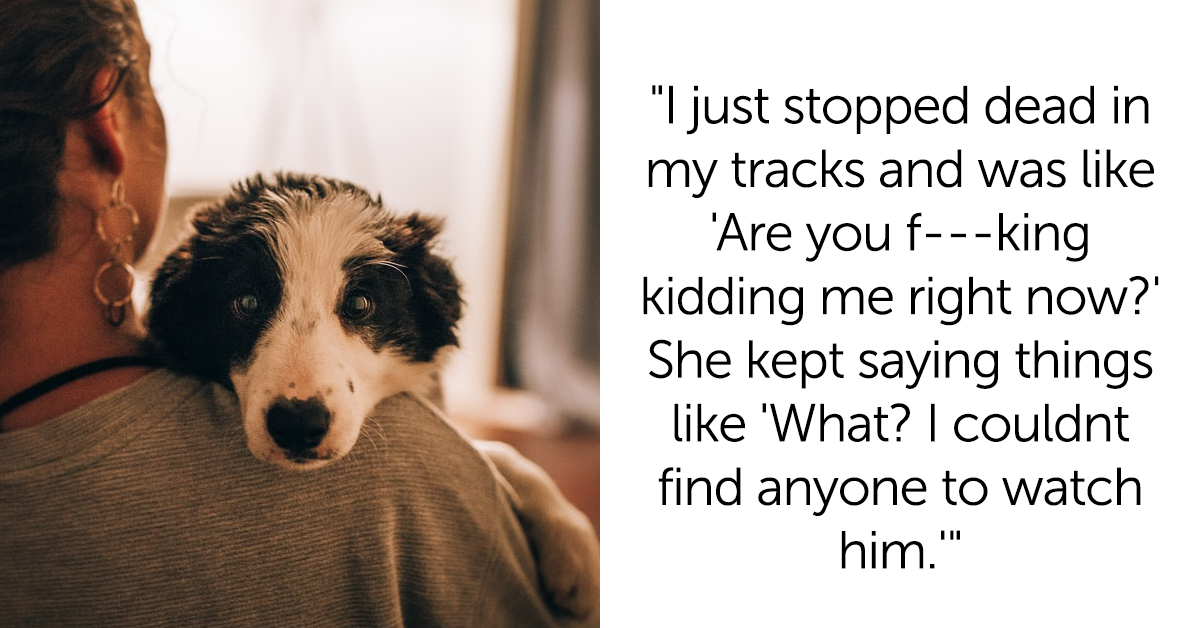 I’m definitely a “dog mom” and if I had my druthers, she’d be with me everywhere. HOWEVER, I’m also respectful of the fact that she is not welcome in all spaces. It’s alright; I made do, though I do think that anyone who doesn’t want THIS FACE around is bananas:

Read also: Woman Asks If She Should Change Her Dog’s ‘Offensive’ Name

Unfortunately, not everyone behaves this way and a lot of dog owners can be remarkably self-centered.

Take the sister-in-law of a woman who wanted to bring her dog into a space explicitly forbidding them. u/Rich_Butterscotch850 posted on AITA wondering if she was a jerk for this reaction:

The OP booked an Airbnb and it was not dog-friendly. Boom. Clear as day.

I booked an AirBnB retreat for me, my husband, my SIL and her husband about 4 months ago. The AirBnB was not dog friendly and I made that perfectly clear, as my SIL thinks her dog should be welcomed everywhere, no matter the cost. She said she would find a dog sitter and I had no reason to question it.

Sister-in-law showed up… with the dog.

The AirBnB was out of state, about 15 hours away on a really nice beach in Tampa. My husband and I flew down and my SIL insisted on driving so she left roughly 24 hours prior to our flight. She said it was cheaper to drive than it was to fly. When my husband and I arrived my SIL and her husband were already sitting in the driveway. When they saw me pull in she had asked if we got the keys yet, which we had because we met up with the owner along the way and she said “oh good, give them to me quick so I can get Brute instead without being seen”.

OP was understandably shocked, to which the in-law just repeated nonsense like “no sitters” and “he’s old.” Despite the absolutely clear instructions forbidding pets, this SIL created a serious issue.

I just stopped dead in my tracks and was like “Are you f-cking kidding me right now?” She kept saying things like “What? I couldnt find anyone to watch him.” Or “He is f-cking old and house broken. I dont know why anyone would be ignorant enough to say no pets allowed.” And basically just kept making excuses as to why she was in the right.

OP’s husband was shocked, OP just… left. She got a refund and the owner was actually wildly nice about it, but OP had had enough. She and her husband went to a hotel.

My husband is just sitting there completely dumbfounded and shaking his head. I just got back in my rental car and left. I got a refund from AirBnB and dropped the keys off with the woman and explained the situation. She told me I could still stay there because I’ve been honest but I told her no, the place was too big for just my husband and myself. We end up staying at a significantly less expensive hotel (I paid almost $4k for the week for the AirBnB but only spent $1800 for the week at the hotel).

Meanwhile, the SIL is furious and has nowhere to stay, can’t afford the rental on her own, and has nothing to eat. MIL is also kind of irked with OP’s reaction, so OP was left to wonder if she was a jerk.

During this whole time my SIL is blowing us up saying she cant afford to stay down here (my husband and I make a lot more than SIL and her husband so we had agreed to pay for everything) and says she didnt bring anything with her to snack on and couldnt afford prices of shit here and whatever. I just straight up ignored her because in my eyes, she tried ruining my trip that I 100% paid for. My MIL is down our throats saying the least we could have done was give them some money for food instead of leaving them stranded and I told her “Nope, they can just drive back home and get food there.” AITA?

Reddit is usually pretty good about deciding situations with in-laws, though once in a while I’m left scratching my head. Not so with this query! Let’s check out some of their replies:

NTA – She ruined her own plans by refusing to follow explicit rules that she clearly knew she was violating. She left a day before you so she had plenty of time to discuss bringing the dog if she really had issues finding someone to watch it. It seems to me that she never seriously considered leaving the dog behind and thought she would get away with it if she didn’t mention it before arriving.