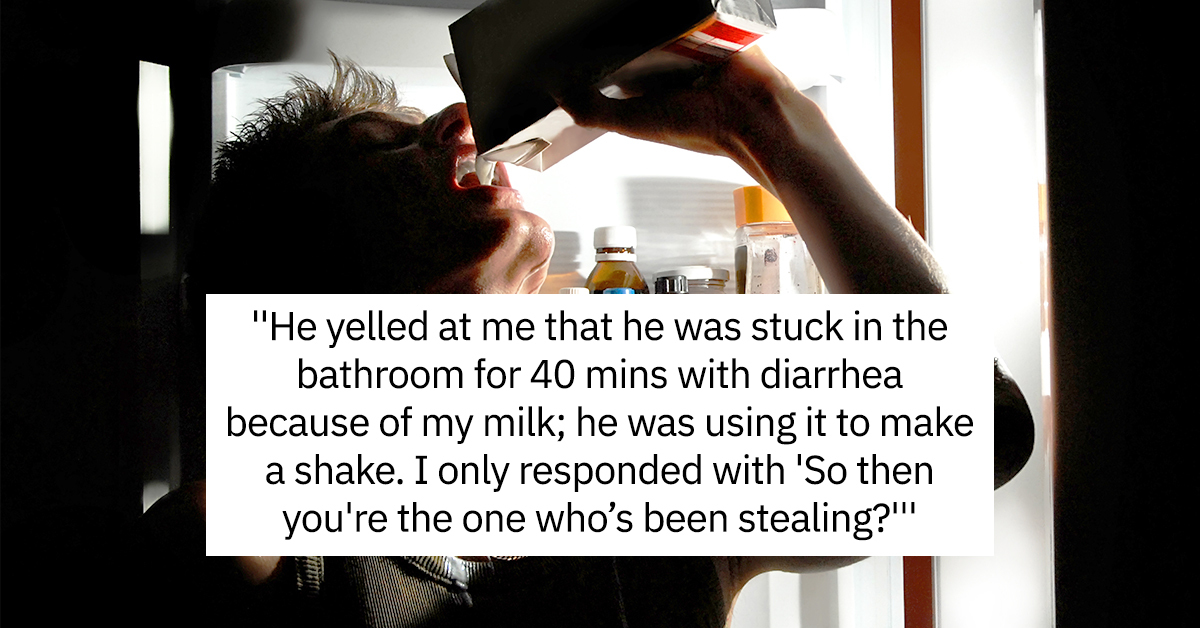 Whether you have a roommate who eats your food and doesn’t replace it or a roommate who feels people are taking his food when that’s not the case, things can get tense.

Food isn’t cheap and sometimes there’s nothing worse than coming home after a rough day and expecting to find your leftovers—and discovering they are gone.

On Reddit, one user posted about his food-thief roommate—and in order to get even with him, the OP put real milk in an almond milk container so his lactose-intolerant roommate would learn a lesson. Did he go too far?

“Me and 2 other guys share an apartment together and we split all the bills. The only thing we don’t split costs on is groceries. Everyone’s in charge of buying their own food and we don’t touch whatever doesn’t belong to us in the fridge. We put our names on everything so no one gets mixed up,” the OP writes.

“One of my roommates, R, keeps stealing my food. I get home from work and containers with my leftovers are sometimes missing (they have my name written on it), or my stuff finishes too quick. My gallon of milk for example. I buy almond milk because I like the taste. But it seems to finish after a week even though I’ve only drank once or twice. I confronted R about this lots of times and that’s caused a lot of arguments. He outright denies it and tells me I’m crazy even though it’s so obvious.”

The OP says that he carpools with his other roommate because they work near the same area—and that he always notices that when they return home, the food is gone.

“Last week, my milk was nearly empty again and I got fed up. I went to the liquor store and bought regular dairy milk. I drank what was left of my almond milk and refilled the gallon with the one I bought. This was to catch/prove R is the one stealing since he’s lactose intolerant.”

“The next day, Saturday, we get back from work and R is pissed. He yelled at me that he was stuck in the bathroom for 40 mins with diarrhea because of my milk; he was using it to make a shake. I only responded with ‘So then you’re the one who’s been stealing?'”

R “freaking exploded” and admitted that he will “sometimes” drink the OP’s milk and eat his food. However, he was furious that the OP switched milk and causes his stomach problems. After telling some friends about the incident, the OP got a bit of flak—and he wants to know if that was deserved.

“As you said if R wasn’t stealing your food, he wouldn’t have had a problem,” said Jayney__

“It’s your food. You could have put your medicine in it or even your pet’s medication in it. You could have put a laxative in it or even syrup of ipecac. And I would still say NTA. When people steal food, lie about it and don’t replace it they reap what they sow. Food is expensive, especially milk substitutes. Without replacing the food he was essentially stealing money from your wallet,” said hcp56.

“This comes up in every roommate/coworker stealing food post, but putting substances in your food that you wouldn’t eat yourself – laxatives, syrup of ipecac (an emetic substance, causes vomiting) or even excessive spice (beyond what you would eat normally) – is illegal. Essentially booby-trapping or poisoning your food in order to catch a thief is illegal. I also think that OP’s roommate would have a case if he decided to sue, since OP disguised regular milk as lactose-free in order to cause someone physical harm,” explained -branches-.

“Speaking as a lactose intolerant person: NTA. Dude had to learn a lesson. If drinking real milk would have killed him, or hospitalised him, then I’d say it was too far, and there should be a better way. But having to shit for 40 minutes is a hilarious, and fair, punishment,” said Kamikaze_Bacon.

“I’m going with ESH but roommate more by a mile. It’s not as bad as an allergy but setting up someone who is going to react as badly as that is a bridge too far for me. If you just got dairy milk and left it in the container and he still used it, that’s all on him,” Myrddin97 observed.

What do you think? Was the OP justified in switching the milk because his roommate had been stealing his food?