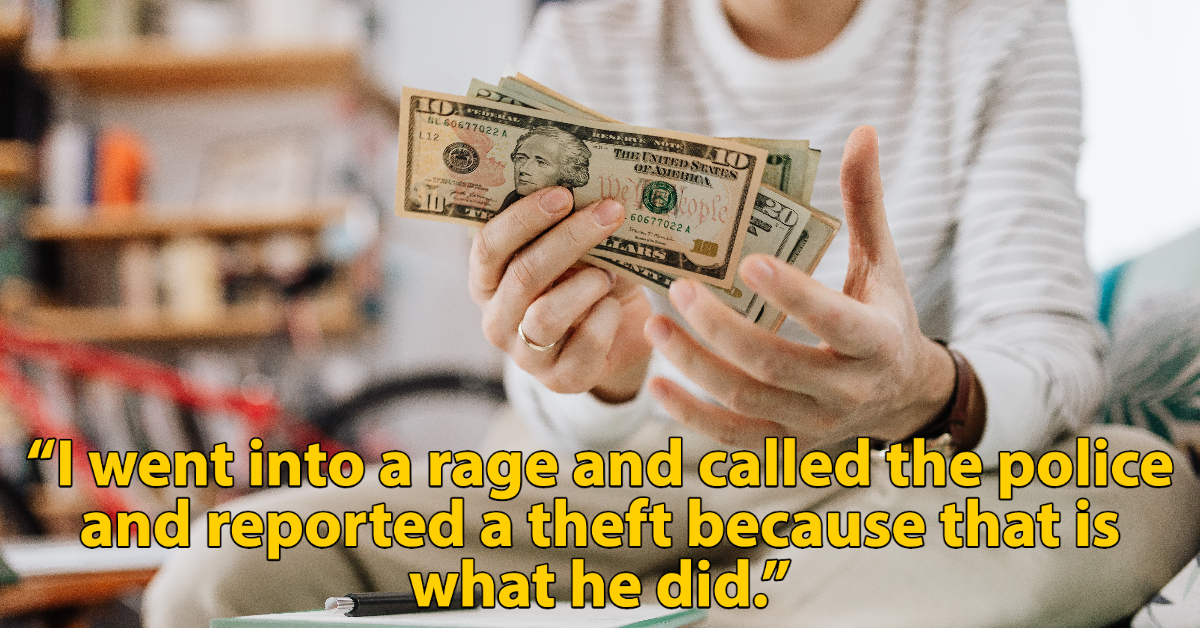 Stealing is never okay — especially in a relationship. You might think “borrowing” some money from your partner is fine, but it’s always best to ask, no matter how much or little that amount might be. And if you just take that money — prepare for consequences.

One Redditor saved $14,000 for school only to discover it missing one day.

“I’ll just get straight to it. I’m a college student and this is my last semester until medical school. I’ve never been able to get a loan I’ve worked 5 1/2 years to get this degree because I have to pay out of pocket so it takes way longer. I’ve worked two sometimes three jobs at a time and barely had a social life.”

“For this upcoming semester I reached my goal for tuition so I quit one of my jobs so I could relax a bit. I was a server/bartender at two bars and an office job so I always have cash hidden in my apartment in my closet in box and before the semester starts a week or two before I deposit it so I can pay my tuition. My boyfriend sometimes stays over while I’m there or when I’m not. Since I’ve been saving for this semester he’s the only one who’s been over I’ve never told him about the box but he knows I have to pay for school.”

She thought she misplaced it, but then found out that her boyfriend “took” it and is planning to pay her back.

“Well yesterday night I get home to put money in the box because I was gonna deposit it today and it’s all gone. I freaked out and tore my apartment up thinking I put it somewhere else knowing I didn’t. I called my boyfriend like crazy no answer. I didn’t sleep last night I was panicking. Then this morning he finally calls me back I’m yelling at him about my money he’s acting all confused and like I’m crazy. He comes over I’m still pissed off after a while he finally admits he took it so he can borrow and he’ll pay me back. Where tf is he gonna get $14,000 from in two weeks?!”

Rightly so, she called the police and reported the theft. Since then, she’s been getting harassed by his family and doesn’t know what to do.

“I went into a rage and called the police and reported a theft because that is what he did. Well it’s been hours now I guess he got his phone call because his family has been blowing my phone up and his mother has said some really hurtful and racist things to me. They’ve been harassing me for the past 6 hours now it’s stressing me out even more, and I hate that I’m feeling bad for him but he stole my money that I’ve been saving for months. His brother did call and he was respectful and said they’ll help him pay it back and I should just go to the police station with him and tell them I want to drop the charges but I really don’t believe them. I could do that and never get my money back still. I don’t know what to do and I hate that I’m contemplating doing this. I’m just really pissed off and have been crying all f*cking day.”

Nope, that man is a thief! Do not drop the charges!

“DO NOT DROP THE CHARGES. 14k is a HUGE amount of money. His family are lying. They are not going to pay you back. Your BF’s first response was to lie: he only admitted the theft afterwards. They will take off and run, and you’ll never see him or any of them ever again. Why would you drop the charges?? He STOLE from you. He deserves to go to prison. Also, If you do drop the charges, it’s possible that any insurance you have will be nullified. You might be able to borrow money from somewhere – but they would need to see evidence of your ability to save money – you’ll need the police report number as part of this application. If his family are banging on about paying the money back, tell them that they can sell one of their cars ASAP and pay you back, as courts usually charge interest on money judgements,” said

“OP, you did not ‘get him arrested’. You factually and accurately reported what occurred, and why you’re now out a full fourteen thousand dollars, two weeks before you planned to use it to pay tuition. Your (better be f*cking EX-)boyfriend was arrested because of what he did, not you. Stop speaking to his family on the phone and/or in person – texts/e-mails only. You’re going to have to recoup this money somehow, and your loss is likely too large for a small claims court (limits vary by jurisdiction, common reference point is $10k). Unless he’s sitting on the 14k in cash, there’s a decent chance you will have to go to court to get it back. Depending on where you are and the laws there, his family’s repeated promises to cover the loss may be evidence that can be used to pursue them in civil court to cover the loss, as whatever he spent it on likely isn’t worth $14k anymore. You’re well within the territory where you should be talking to an attorney,” explained

“NTA. OP as a criminal defense attorney, DO NOT DROP THE CHARGES. The court can order him to pay restitution forcing him to give it back. Block his entire family and let the DA know they are harassing you,” said

“This relationship is done. Don’t drop the charges until you have $14k in your bank account. As soon as they return they money you can be reasonable but stay strong. This was a horrible violation and you deserve to get that money back. Who BORROWS that much money without asking? This is bananas. Definitely NTA. ETA I agree with replies that the situation calls for not dropping the charges ever. It just sounds like a mess to have to deal with if OP is already working so hard,” said

“Don’t drop the criminal charges but also pursue a civil case. If he has a job, they can garnish his wages or put a lien on any other assets. DO NOT DROP THE CHARGES,” advised

“Do NOT drop the charges. He stole from you and you have no guarantee that the money will come back. If his family really want to help, they will pay the money back to you so they can tell the judge he has made restitution, for a better sentence. The trust in this relationship has gone out the door and it is over. Block his family on your phone – you do not need their abusive. Before you do, if you have any messages from them, save them and ask the police for a AVO to prevent them from abusing and threatening you,” suggested