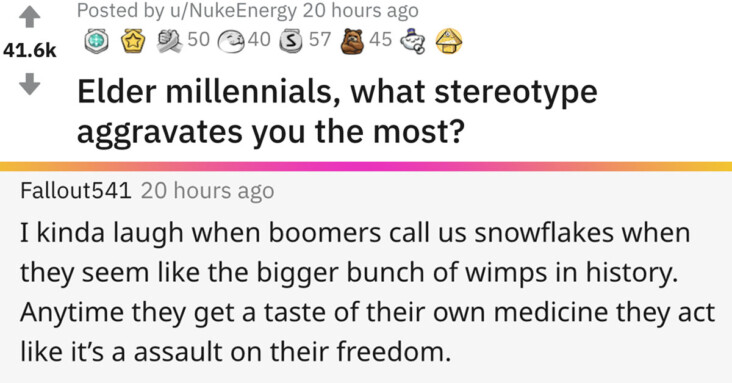 Millennials are used to getting crap from older generations for all kinds of things. But now, they’re even been getting attacked by those ungrateful Gen-Z kids.

The generation that grew up dodging zingers about participation trophies, being lazy, and not hating gay people now has to defend their love for skinny jeans.

Millennials are dealing with their first gray hairs and whether or not it’s too late to have the kids they swore they’d never want to have, just let them part their hair on the side if they want to!

The elder Millennials of Reddit have been talking about the most frustrating stereotypes they grew up dealing with from those grumpy Boomers and annoying Gen Xers.

“Elder Millennials, what stereotype aggravates you the most?”

Here are the 25 most annoying stereotypes about their generation according to Millennials of Reddit.

“You must go to college and get a degree. You don’t want to be flipping burgers or changing the oil in some rich guy’s car.”
*Does that, incurs a lot of debt.*
“These irresponsible millennials and their elitist liberal educations! If they’d been smart, they’d go to community college and transfer/go to trade school. They won’t just take a job, any job to pay the bills. They could flip burgers. Why should we pay for their mistakes?” –fishmom5

“I’m getting really tired of hearing about us lying around expecting handouts and not working. Especially when it’s a situation where the person saying it is standing in a room with a lot of millennials, all of whom have jobs, which is every single time I’ve heard this said in real life. Like, who here is lying around doing nothing? Whose your example? Oh it’s your neighbor’s best friend’s cousins son, he doesn’t have a job and lies on the couch all day. Okay.” –12ed11

“I kinda laugh when boomers call us snowflakes when they seem like the bigger bunch of wimps in history. Anytime they get a taste of their own medicine they act like it’s a assault on their freedom.” –Fallout541

“I hate that millennials get pinned as being addicted to their phones. Like, always behind a screen and not interacting with the real world. I for one try really hard to have good phone etiquette and what I’ve noticed is, boomers can be really bad at this. Some of the older people in my office and family are the worst offenders when it comes to texting at the table or just checking out on social media.” –Omega-10

“That we don’t take our jobs seriously. I had to sit my peer (55+) down and tell him that the millennials he was bitching about were the same age as the “very qualified and mission focused” person he’s been working with for the past decade. We’re upper management.” –werewolf3five9

“The stereotype that a lot of millennials are struggling with money because they’re “lazy and entitled” is ridiculous. Look at the average wage vs. the cost of rent, health care, and higher education now, vs. what it was a few decades ago. Boomers had it far easier than we did but act like our generation’s struggles just boil down to a lack of hard work. Also, the “participation trophy” meme, aside from being largely bullshit anyway, raises the question: whose generation was giving out the participation trophies? Why would you blame the kids who received them?” –ClvrNickname

“Like many, I am working from home. I’ll get a call from my mom “hey you are not working now, go do something for me”. Thanks, working from home is waaaay sh*ttier than going to “real” work, at least for me. I do fit the stereotype of hating talking on the phone.” –ooo-ooo-oooyea

“As an American, its basically that we’re inheriting a system that nobody trusts us to run. all the people who represent us are 2-3 times older than us, the older generations are refusing or unable to retire which is preventing us from actually entering the job market.” –ksk3

“When we are looked down upon for needing to use YouTube, etc. for learning tasks (e.g. changing a tire) that our parents were taught by our grandparents but the former never took the time to teach us.” –ScoutyBeagle

“That we’re entitled. Having worked with the general public for over a decade, I can assure you the overwhelming majority of entitled and rude behavior comes from the over 50s crowd.” –beeinbris

“The use of the term “millennial” to refer to the general “young person”. –Josh4R3d

“I, for one, am tired of hearing about the things we’ve “killed”. Tastes change all the time, this is not new.” –Aztaris

“We can’t afford houses because apparently we spend too much on avocado toast. No, in the 80s and 90s houses were about 3 to 4 times the average annual income. Now it’s close to 10 (at least in my part of the world).” –MeltingDog

“I had to go on a business trip and work with an older lady who was just about ready to retire. I manage trade shows and travel around North America to convention centers and hotels organizing events. She had an old school way of checking inventory by hand. I’m pretty good with excel and salesforce, so I had a faster way of doing it. I got the job done like I’ve been doing for years and left so I could go enjoy Vancouver. We’ve all heard the saying “Work Smarter, not harder”. She couldn’t get it through her head that the work day was done for me. I found out from another colleague that she called me a lazy entitled millennial with no work ethic. So that’s the stereotype I hate. I busted my ass and paid my way through college. I worked long hours and kissed ass to get to the position I’m in. I know plenty of other young professionals that have done the same. This idea from baby boomers that we’re entitled or lazy gets tiresome.” –FieriFlavortown0

“When someone makes mention of some “challenge” teenagers are doing like eating tide pods and people are like “Ugg, millennials.” Uhm, no. Just because 4-5 people did something stupid and then the news decided to take it and run with it and make it sound way more wide spread than it is, doesn’t mean you get to generalize a whole generation. Secondly, millennials are practically the age of the parents of the Tik Tok generation. It’s not a generic term for any young person doing something you don’t like.” –AnotherLolAnon

“That people don’t own a house because they’re “lazy”. I have taken the time to explain the loss of buying power, stagnant wages, automation, contract employees, lack of job security, cost of living in other areas, etc. play way more into it.” –lazarus870

“I just shoveled like 20 of my elderly neighbors driveways this morning after snowpocalypse. By Wednesday, while chatting they’ll talk about those lazy millennials like they’re still 20 year olds. Bro, I’m 38 and got 4 kids and own the biggest house of this block. Am millennial. Can not convince them of this, ever.” –The_user_of

“We are what the previous generation made us and we have been shaped by the world we were raised in and then we are attacked for who we’ve (been perceived to) become as a result. It’s like getting angry at the puddle of milk because you threw the carton on the floor.” –QuietlySmirking

“That we don’t work hard. We’re the most overworked and underpaid generation, I have a bachelor’s and master’s and $30k of debt and I worked TWO jobs while in school and couldn’t afford to pay for it. I’ve been busting my ass for a decade making $10-$13 an hour, working over 40 hours a week. No benefits. And the younger generation can suck my dick for claiming we aren’t radical enough, for the love of God we are simply trying to survive.” –thatcondowasmylife

“1981 here. The stereotypes are amazing. Every time I hear an insult aimed at “millennials” I’m amazed (and amused) that anyone thought it was an insult. An entire demographic dedicated to making sure everyone is doing something they believe in, that we all get the support we need, and putting Applebee’s out of business? I’m honored to be counted among them on a technicality.” –fancy-free

“”Participation trophies”–these were for our BOOMER PARENTS, not for us! And now WE are blamed by THEM for being entitled because we got them!” –ab37

“Being blamed for not buying things. Like, Millennials are killing X product line. Welp, the Boomers who won’t retire are clinging to the top level jobs, so we don’t have the opportunities they did to move up and earn more money, so we have to be choosy about the things we spend our money on. Not to mention, most of us are trying to be mindful of our consumerism as a whole, not buying tons of stuff for the sake of having tons of stuff.” –that-1-chick-u-know

“It really pisses me off how older generations constantly perpetuate the idea that millennials have no manners and are just inherently sh*tty and rude. I have worked in retail, a call center, and social services for my entire working life, so I have communicated with a lot of different people from all age groups and all walks of life. Without a doubt, there is an absolute and distinct difference in “manners” between millennials and folks from older generations. Of course I can’t paint everyone with a broad brush, but if I had to list the 100 most entitled, batshit crazy, unbelievably rude people I have ever spoken to, maybe only 10 of them would be millennials.” –slashbackblazers

“When Millennials do shit that Gen Xer’s and Boomers did, but for some reason we get derided as the shittiest generation to ever get whelped. When Millennials take cooking classes and sewing classes and basic auto repair classes (and other shit our parents were too lazy/busy to teach us, but no one ever talks about that part) we’re derided as being helpless and needing ‘Adulting Classes’. When Gen X’ers and Boomers did literally exactly the same thing, it was celebrated at self-improvement and the American Dream and called ‘Taking a class down at the Y/Learning Annex/Community College.'” –DisavowedOperator

“When all the college kids were out partying during the pandemic were called Millennials, that was Gen Z. I had family blaming my generation for this shit.” –CinnamonNOOo