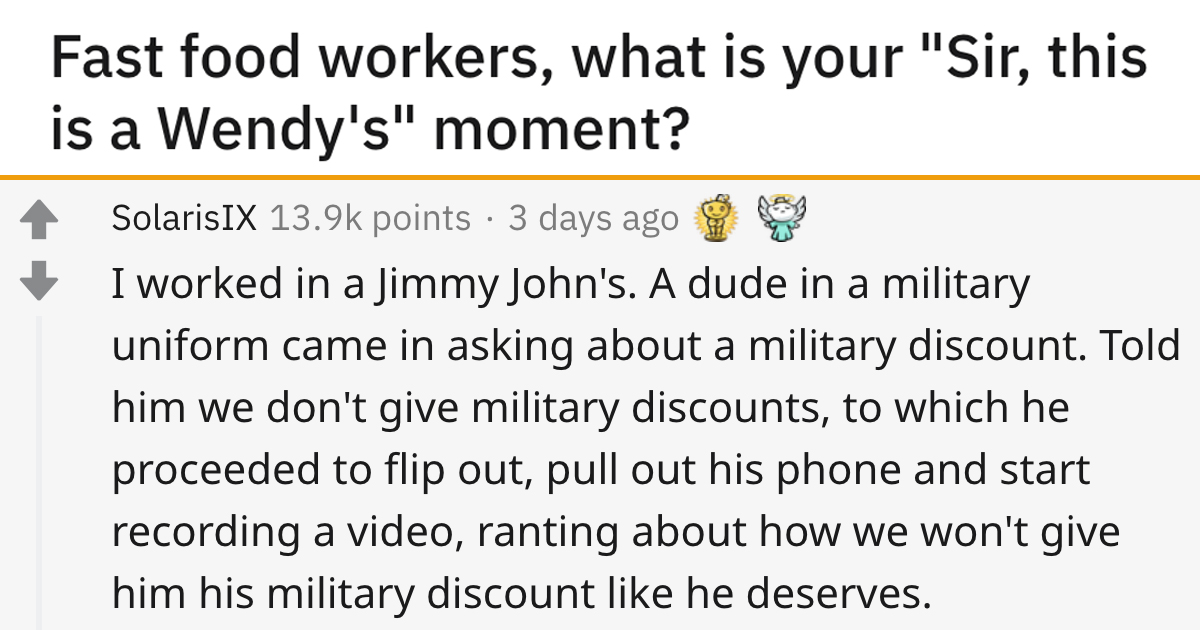 Ah, customer service. Whether you work in fast food, retail, or any other service job, you’ve likely had to deal with customers who have no idea what they are talking about—and sometimes don’t know where they even are.

One Redditor posed the question “What is your ‘Sir, this is a Wendy’s’ moment” to fast food workers, but everyone who ever had to deal with an entitled, confused, or rude customer needed to unburden themselves of their stories immediately.

To be honest, it brought me back to high school when I worked in a pharmacy, and one woman brought her child in with plastic bags of quarters, nickels, dimes, and pennies to pay for a Beanie Baby and just plopped the bags on the counter and stared at me. I appreciated that she was teaching her kid a lesson about saving money in his piggy bank, but I deeply wished she had changed all those coins for bills at the bank.

Here are some of the best IRL “Sir, this is a Wendy’s” moments.

“One time this older dude rushes up to order and slams a coupon on the counter saying, ‘I want this!’ I pick it up It has menu items for KFC. I ask him, ‘What exactly would you like to order?’ He instantly gets disgruntled with me for not reading his god damn mind and shakes his finger at the coupon and said, ‘Well whatever is on the coupon, obviously!?’ in a condescending tone. I just look at him for a minute and say word for word ‘Sir, this is McDonald’s. I don’t know what you want me to do with this KFC coupon.’ He looks at me dumbfounded. Then looks behind me at the menu and around the store, yells ‘Awh, Shit!’ (Like this isn’t his first time walking into the wrong establishment), grabs the coupon and storms off.” — BALD-HEADED_HOE

“I worked at a liquor store a few years back. One day a man walks in and puts two bottles of whiskey down, and as I’m scanning the bottles I make the usual small talk. ‘How’s your night going?” The man took a deep breath and looked me in the eyes and says, ‘Well, I just walked in on my 14 year old son completely naked video chatting a fuckin middle aged man, so it could be a lot better.’ I didn’t quite know what to say, so I told him, ‘Oh, that’s not good….enjoy your drinks.'” — 22deepfriedpickles22

“Dude came to drive thru. I open the window, ‘Sir, how can I help you?’ ‘I’m outa checks,’ he replies calmly. ‘Not sure I follow you,’ I say. ‘I’m outa checks,’ he says again more impatiently. ‘Right, I heard you but I don’t know what you want me to do about it. You can pay with cash or card too.’ Dude gives me a weird look then says, ‘Oh this ain’t the bank.’ And peels out away from the window. I’m a pharmacist.” — CadburyOvaltineDette

“Y’all wouldn’t believe the amount of disappointed rich people who come to Panda Express and find out we aren’t serving authentic Chinese food. Once a well traveled rich woman came into Panda Express and stood at the buffet line for about ten minutes, critiquing our ‘mistakes’ and explaining how Chinese cuisine doesn’t actually have fried wontons with cream cheese filling. Ma’am, we just fry what came in the bag from a warehouse in California.” — Upstairs_Cow

“I worked at a pizza place and I got a complaint that we delivered sushi. It was a pepperoni pizza. But he could not be convinced.” — babytardis

“I used to work at Target and they hired a new girl (who had previously worked at Walmart) to work the fitting rooms – and by default the intercom system. A few days after she started she was about to make an announcement over the intercom and I guess habit took over because she started the announcement with ‘Attention Walmart shoppers…’ She realized her mistake and made a good recovery with ‘…you are in the wrong store.'” — Yodajrp

“I worked at a Chipotle for four years and got some pretty interesting requests. But I’ll never forget the time someone ordered soup. Chipotle doesn’t have soup. I promptly reminded her this was a chipotle, but she insisted we could do it. So we made her soup at chipotle! It was the grosses concoction of bean juice, sofritas, mild, medium and hot salsa, and sour cream. She was stoked.” — TheBeanAndTheBug

“I worked at the concession stand at a movie theater in high school. This guy orders a popcorn and large diet pepsi. Comes back to the counter like 10 mins later complaining that his soda is carbonated. I explained to him that all of our sodas are carbonated and he asks me if we had a microwave. We did, so he wants me go into the back and microwave his soda. He wants it warm but not too warm. Went to the back and had to pour the soda into two different cups because the original wouldn’t fit into the microwave. Truly bizarre experience.” — grizz07

“Worked at McDonalds. We would always get people that would ask for a Whopper Burger, either seriously or trying to be funny. Cue the exhausted, ‘We don’t sell Whoppers sir/ma’am, we have the Big Mac.’ in response. Usually we get an ‘oh, right. Ok, one of those.’

Until one day we had a guy come through drive thru that asked for a large Whopper Meal, and instant reply back: ‘Sir, we don’t sell Whoppers here, we have Big Macs or Quarter Pounders or McChickens.’

Me: ‘Sir, we don’t sell those. This is a McDonalds. The closest equivalent would be a Big Mac, but it’s NOT a Whopper. If you want an actual Whopper burger you need to go to Burger King.’

Me: ‘Ok sir, I can’t give you a whopper meal here, but I can order a Big Mac Meal for you. The Big Mac is the closest equivalent we have, but it is not a Whopper. Are you happy with a large Big Mac meal instead?’

We give him a large Big Mac meal, and sure enough 10 minutes later he is back through the drive-thru screaming into the speaker that he hasn’t gotten his Whopper Burger.” — LittlestSlipper55

“I worked at Dunkin and one time a customer came through the drive through and complained to us that the drive-thru was built in a way that made it hard to drive. She started yelling at my co-workers so I just put down what I was doing and told her, ‘Ma’am we cannot change the construction of the building.’ Like seriously though what’d she want us to do I just make sandwiches.” — givemethebeef