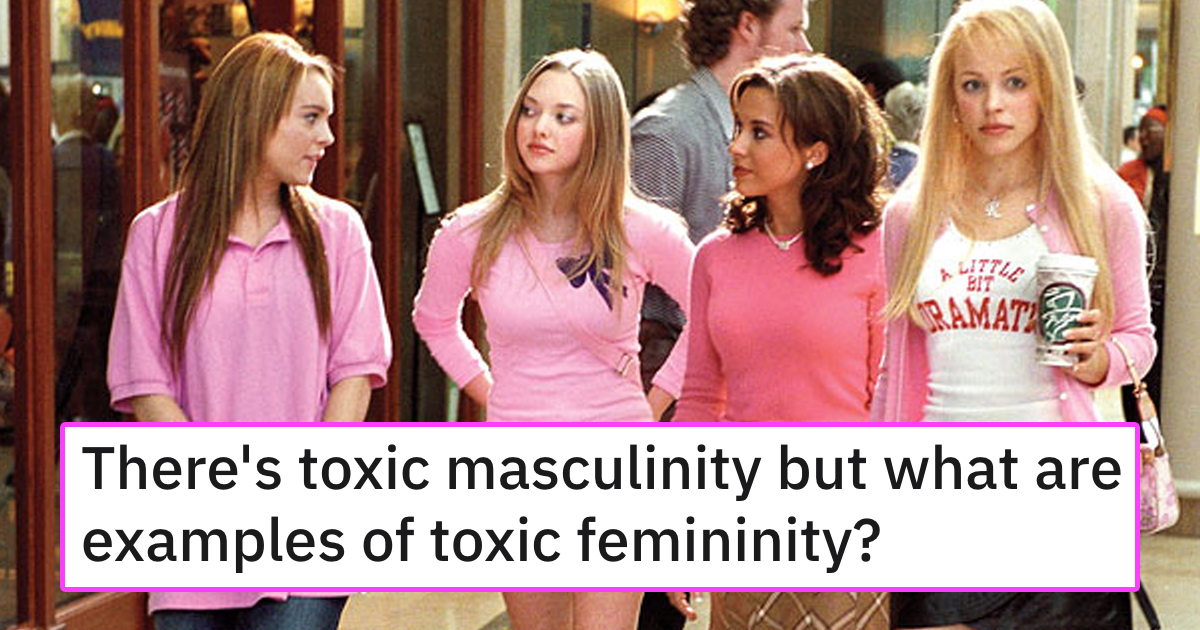 People shared things that women do that could be seen as problematic.

A quick review: toxic masculinity is a cultural idea of manliness that holds men’s strength & stoicism on a pedestal in a way that is damaging to mental health and society.

So here’s what people wrote:

1. The right or wrong

“Since toxic masculinity is pretty much saying that the ‘right’ way to be a man is to be manly, I think toxic femininity is kind of the same in that it has to do with acting like certain ways of being a woman are ‘superior’ to others.”

“To me it would mean women who bag on other women for woman-ing differently than they do. Some women will feel nothing about letting you know how you are parenting wrong by using x product or letting your child do y particular thing. It becomes really toxic, especially after someone gives birth.”

“There’s just a ton of shaming everywhere, especially online. ‘You’re planning on not medicating? God, you’re not getting a medal. You’re medicating? Wow, you’re so weak. You’re not breastfeeding? What, are you abusing your child?! You’re breastfeeding? Do you spit on moms who can’t?! You’re going back to work? What’s wrong with you? Don’t you love your child?'”

“Even things as simple as ‘You got the easy way out’ for having a C-section (NOTHING easy about major abdominal surgery). Women not supporting other women is disgusting.”

“When women in workplaces form cliques and cut out anyone they deem to be an outsider.”

“People who are mothers who treat other people like crap and then justify it by saying they’re a ‘mama bear.’ Lady, you just screamed at a waitress because there was broccoli in your kid’s mac and cheese, and your kid doesn’t like broccoli.”

“Women minimizing other women’s pain. Happens all the time in health care, for instance. Somewhat of an issue because people don’t realize that not all periods are the same. One woman can spend three days in the fetal position with stabbing pain and another be like, ‘Period? Oh, that drop of blood? Yeah, no big deal.'”

“Being shamed for natural functions. I know men do it too (to an extent), but women are more likely, I feel, to judge body hair, wrinkles, grey hairs, etc.”

“Being overly and unhealthily competitive about ring sizes.”

“Probably the culture around eating. When I was 17–18, a few friends kept saying how much more attractive I’d be if I lost weight, how that’s why most guys weren’t into me, how I’d regret not being skinny in college, etc. My BMI was slightly under 25, so I wasn’t overweight. But I was close to it, especially compared to them. So, I basically became anorexic from 18–20 just because the feedback was like a high. I recovered, but not enough to make my mom and others happy, even though my BMI was 22–23. This continued for years between friends and family, and it was exhausting cycling between being too skinny or not average enough.”

“Double standards in dating. I hear this a lot personally with my mother, but if her boyfriend goes somewhere without telling her, she freaks out and throws a tantrum (yes, literally). Yet, if he asks anything about her, then he’s a douche trying to control her and cheating.”

“Women who think other women who enjoy cooking, child rearing, and homemaking are perpetuating stereotyped gender roles enforced by the patriarchy. Tearing other women down because what they enjoy doesn’t fit into the tiny box of what YOUR version of feminism should be is toxic femininity to the max.”

“Being told I’m not a real woman because I don’t want kids. I was told this by a woman.”

15. Cruelty in the name of feminism

“When we crap all over men and boys, while calling it ‘modern feminism.’ We don’t have to deconstruct and destroy everything masculine just for women to be equal. That is literally the opposite of equality and should be offensive to everyone.”