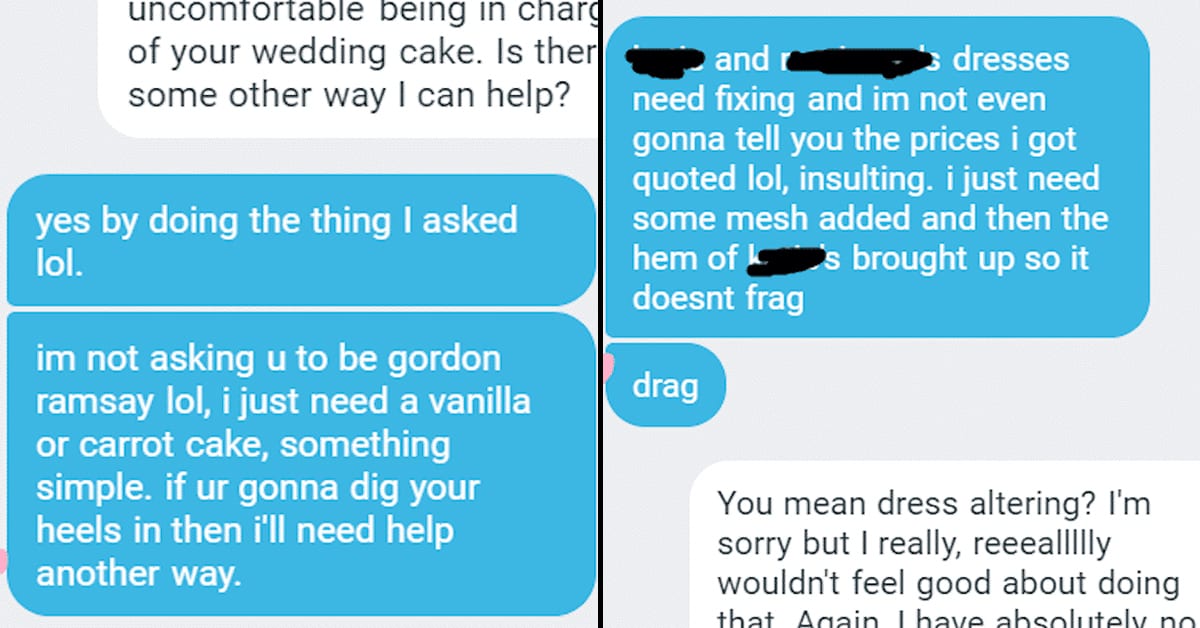 Weddings can make people crazy, but there’s a special kind of weird that happens to folks trying to do things on the cheap. It’s fine to have a simple ceremony and celebration. In fact, not breaking the bank on a single day is smart planning for life!

But some folks don’t want to streamline their wedding day. They want other people to pick up the slack. That seems to be the case for u/fishbebrave who posted a series of increasingly demanding texts from her aunt on r/ChoosingBeggars, who started at asking her to bake a wedding cake. A four-tier wedding cake!! Can you imagine asking anyone to do that for free?

The OP at least had the sense to say no to making a cake, not only because it’s a lot of work, but because she literally doesn’t know how to do that kind of thing:

The aunt says perfection isn’t necessary, it’ll just be “baking the 4 sponges, cutting them to size and covering them in icing and maybe a bit of superficial decorating.”

Oh, is that all? She continues with some insults, writing, “Everyone is pitching in, ur the only one i’m having problems with so far.”

The OP stands her ground and asks if there’s another way she can help. The aunt then suggests she hems a dress and add a mesh overlay because the price quoted to her by an actual tailor was too expensive. If you’re guessing the OP has no experience as a seamstress, you are right.

“You mean dress altering?” she writes. “I’m sorry but I reeeealllly wouldn’t feel good about doing that. Again, I have absolutely no idea how. I think it’s best left to the professionals.”

“Oh come on,” the aunt replies. “You’re being belligerent now.”

“Is there anything i can that youll actually do??” the aunt wants to know. “Everyone else has been rushing to help us. the smaller jobs are things like designing and creating reminders for guests and the final seating plan but as its smaller id prefer both done together.”

“I honestly can’t tell if you’re joking or not lol, ” the OP answers. She offers to come by and give her opinion on “reminders” though she’s unsure what that means. She also offers to help with set up before the wedding.

“This.” Auntie states in response. “This. is why people say you’re lazy and will have problems later on in life.”

“I don’t think anybody says that but I’ll write it on the inside of my wrist for later to keep me grounded, thanks,” says the OP.

Her aunt then tells her she won’t be getting into university, revealing she is asking someone who is not yet in college to make her dress and bake her wedding cake. Surprise twist. She adds that her niece will likely end up in hell for not helping family and that she might rescind her wedding invitation.

That sounds like a wonderful gift, but the aunt probably doesn’t see it that way.

The OP tells her aunt not to message her again, so she really won this round. Why would anyone behave this way? Well, Redditor IdioticQuail has a good answer:

Shes doesn’t want to pay someone to do it, and if it comes out bad she can just push all the blame on OP instead of admitting it was her own selfish ass who wouldn’t just pay for a professional.

She probably still will try to blame OP for the cake and dress somehow.

True. Don’t go to that wedding, OP, even if your aunt comes around. The cake is gonna be terrible. 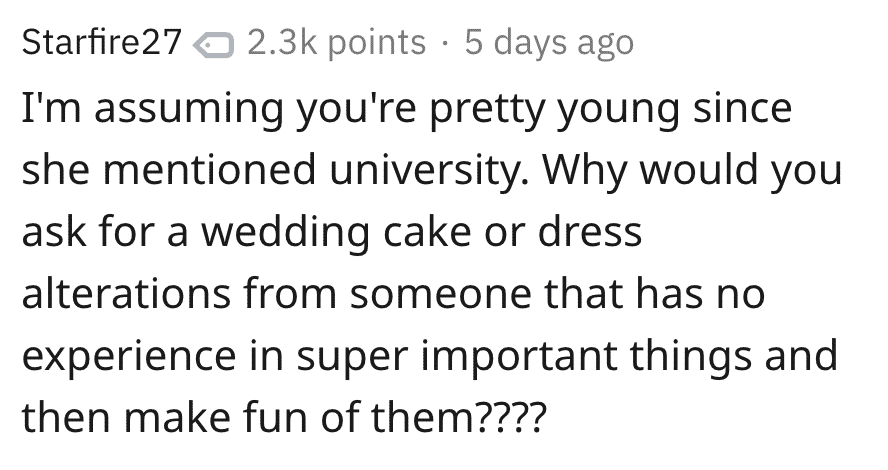 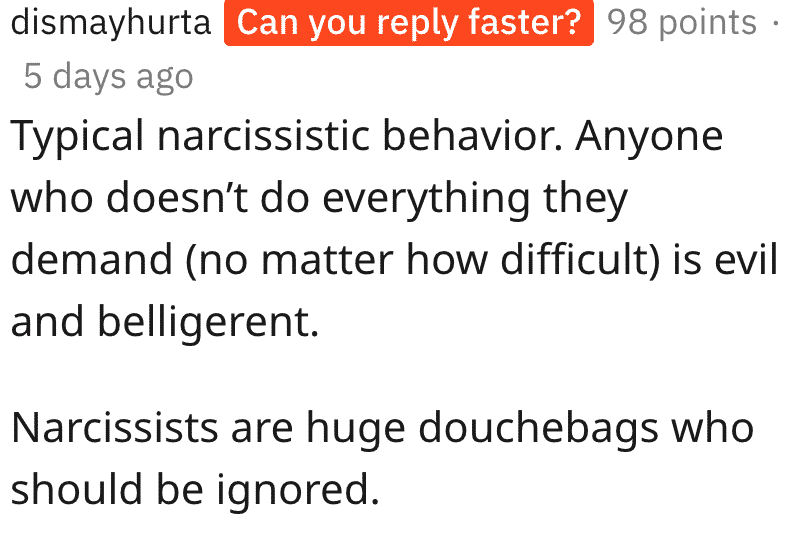 More of the worst choosing beggars: