This Imgur post taught me a whole lot really quickly. For one, moms share breast milk when they produce extra. That makes sense. Not everyone can afford formula, or their child might be unable to digest it. I also learned they organize sharing that breast milk on Facebook sometimes, another thing that makes sense. Moms love Facebook, based on the people I see posting the most often.

One thing I learned that didn’t make much sense was that people could get so incredibly petty about breast milk. The series of screenshots in the post are of a conversation between a choosing beggar looking for breast milk and someone who has been giving it out. The person asking writes to see if the person donating had “any more to spare.”

They say they do, then ask, “How old is your little one and how much do you need?” 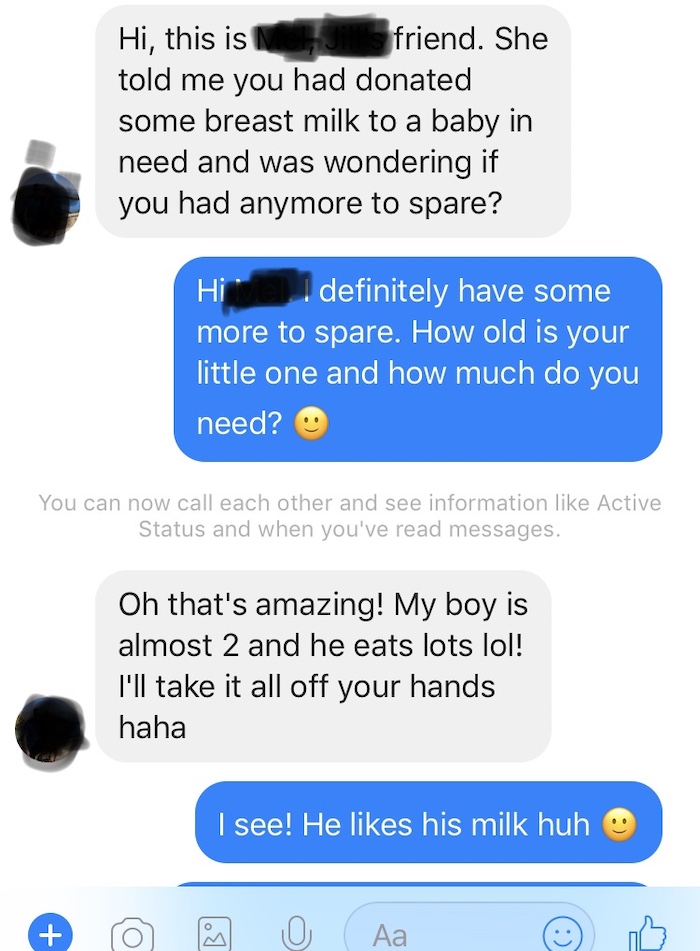 “Oh that’s amazing! My boy is almost 2 and he eats lots lol! I’ll take it all off your hands.”

Now if you don’t know much about kids, two-year-olds can usually eat solids as well as liquids. Maybe the kid is so hungry because he’s being kept on a liquid diet, I don’t know. But the donater replies very generously, “I can spare about 60 ounces today if you can pick up.”

She adds that she is trying to save some milk for babies on the young side or preemies in need who are also asking for milk in their Facebook group. The response is…not so nice. 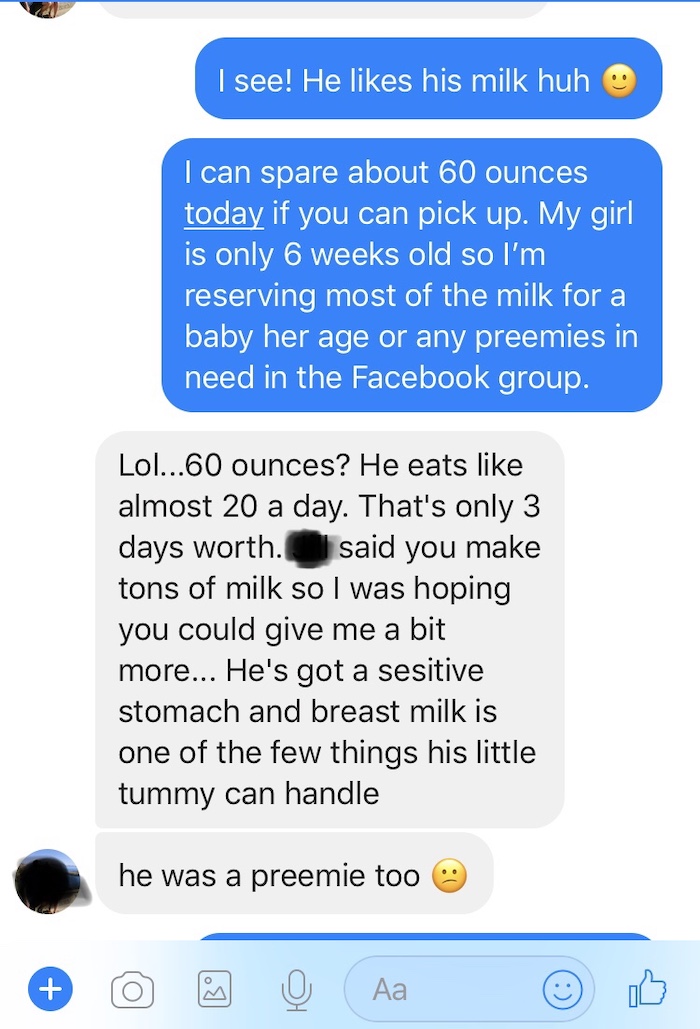 Three days’ worth seems like a lot to me since, after all, you’re asking for free bodily fluid out of someone else’s breasts. “He was a preemie too,” they add, with a frownie face added for good measure.

The mom says she understands, but she’s trying to help infants and premature babies who need the nourishment. Then the toddler’s parent starts really complaining. 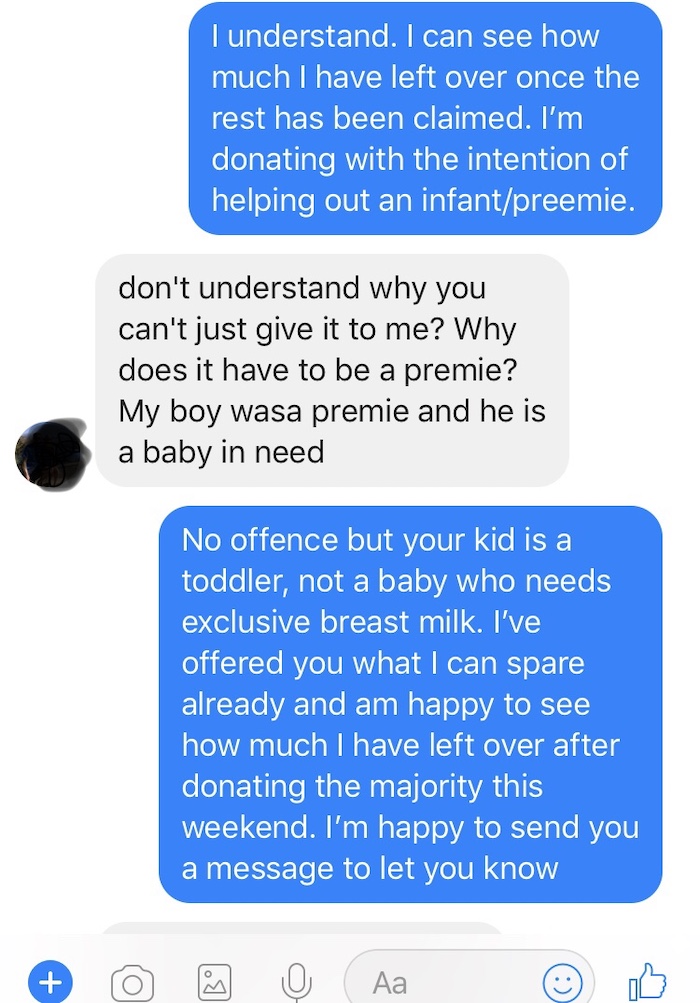 “No offense but your kid is a toddler, not a baby who needs exclusive breast milk,” says the mom. “I’ve offered you what I can spare already and am happy to see how much I have left over after donating the majority this weekend. I’m happy to send you a message to let you know.”

“Whatever b*tch, keep your sour milk. It’s probably tainted with booze and painkillers, feel sorry for whichever poor kids end up with it.” 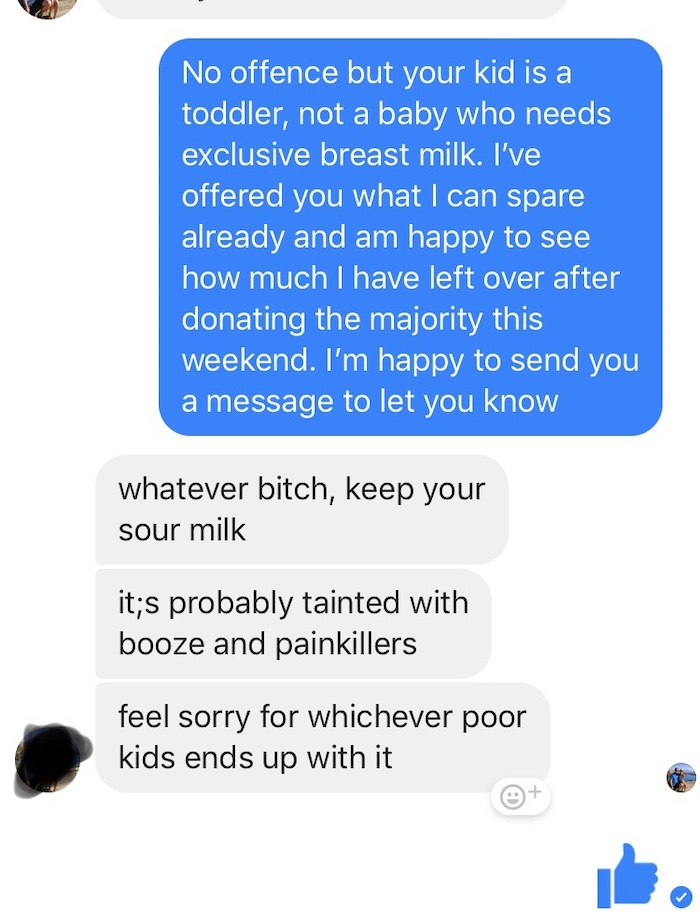 Somehow managing to maintain her sense of humor, the mom just replies with a thumbs up.  I don’t know what this crank scamming for milk was hoping to accomplish, but I guess some people would rather cry over not getting enough milk than feed their kid.