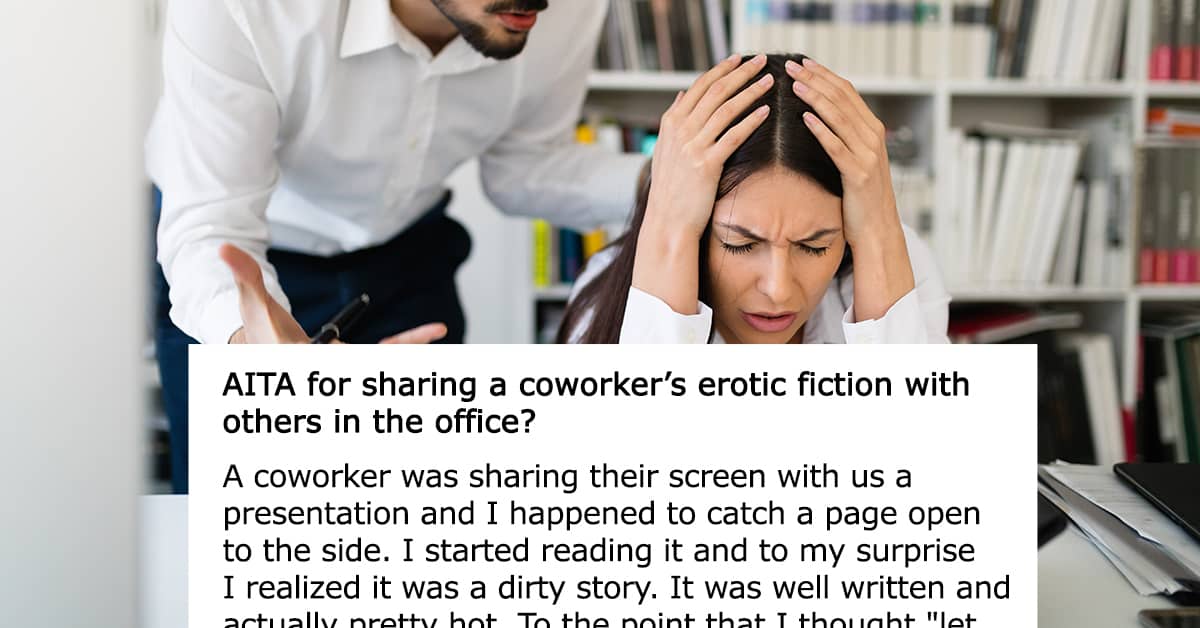 As many of us adjust to working from home, it’s become common to share screens when asking a questions. This means we need to practice good screen etiquette—if we care about that sort of thing. No weird tabs open in the back. Keep your procrastination websites out of sight. And don’t snoop on your coworkers’ private stuff.

There are a few perils to sharing your screen, but this story from Reddit’s Am I The Assh*le subreddit reminds us to be careful about what we share.

The original poster, u/FanaticNeon, wrote that a coworker was sharing their screen during a presentation, and “I happened to catch a page open to the side. I was bored during the presentation so absentmindedly started reading it and to my surprise I realized it was a dirty story.”

“It was well written and actually pretty hot. To the point that I thought ‘let me grab this for later,'” they wrote.

“I was able to discern from the available window what the story title was and the name of the website so I went to the website and I did manage to find the same story. I ended up really enjoying the story so I clicked on the username and read a few of the other stories. There were some series stories with multiple parts or recurring characters, and one was, to my utter shock, pretty obviously our office and people in it. Which meant this wasn’t something they were reading. This was something they were writing.”

“I had intended it to just be a laugh between us, but I hadn’t communicated that to them in time, because they immediately sent it to 5 other people. You can see where this is going. Our entire office knows about it now. Especially with so little other socialization or interoffice drama.”

The author of the erotica discovered what happened, and is seriously considering quitting “because they’re not sure how they could reasonably return to work with these people after they’d read about something like this and how she thinks about them in the context of fantasy.”

The OP apologized, but the damage is done. Now, they want to know if they’re an asshole—and Reddit was only happy to opine.

“You’re an asshole for: being nosy and snooping on someone else’s computer, sharing said material when you realized it involved people in your office, your poor excuse of an apology in the vein of a backhanded compliment in the face of your co-worker considering quitting solely because of your actions,” one user said. 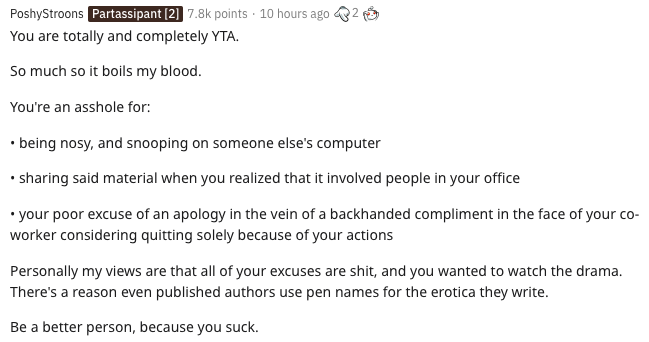 Another Redditor explained that writing erotica without the peoples’ consent and publishing it publicly is “creepy as fuck and a giant red flag.”

There’s a lot of complexity in this story about boundaries and privacy on both ends. Do you think the OP was wrong for sharing their coworker’s erotica?

More of the best AskReddit threads: