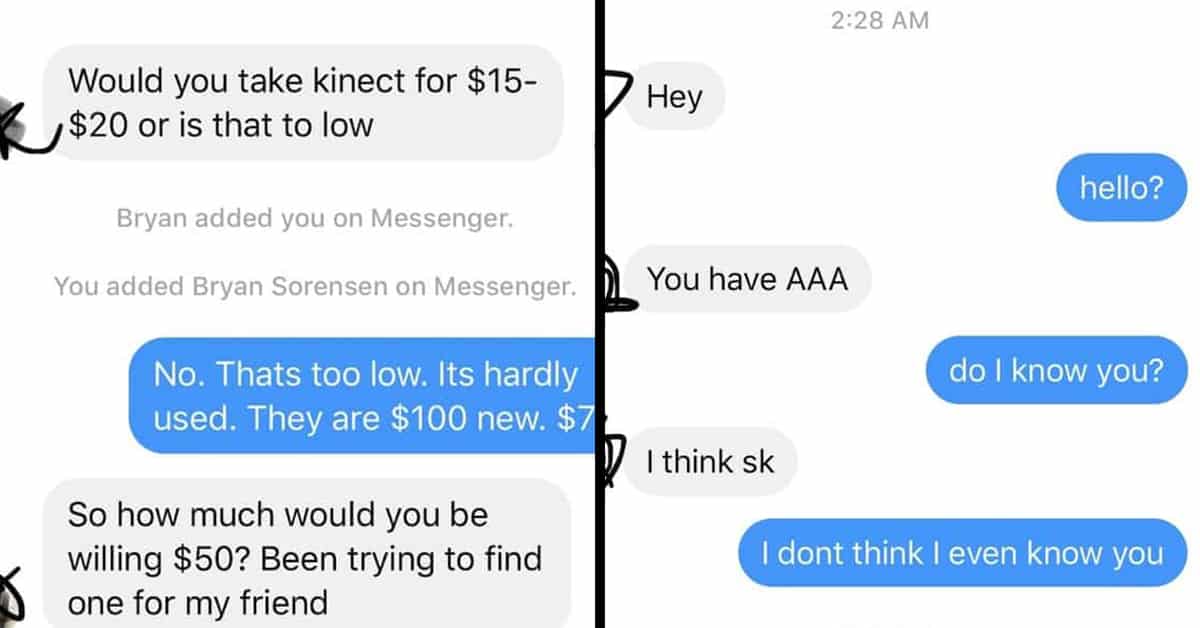 Many people try to be polite and considerate of others. Not enough, but in general, we have certain expectations of behavior that society as a whole tries to live up to. When someone blatantly breaks that code, they’re considered incredibly entitled and rude. They are! yet, every once in a while I see an example of this type of behavior that’s so extreme it’s almost an art performance piece.

This post from r/ChoosingBeggars is the perfect example of entitlement as an art form. It’s a screenshot series of two conversations taking place three years apart. The first conversation is about a Kinect for sale, in which the Choosing Beggar tries to negotiate for a rate much lower than it’s worth. That’s common enough. But then three years later he got in touch again.

Out of nowhere, the CB messages to ask, “Do you have AAA?” Understandably, the OP responds, “Do I know you?”

Then they go back and forth discussing whether or not the OP should order a tow truck for the CB, even though they’ve never met and live in different states, so it would be against AAA policy for the OP to call a truck anyway. The CB keeps asking for the OP to figure out what they should do.

That brings up a lot of questions for me, specifically: how has this person managed to survive the last three years without help?

They also claim they’re a lawyer who can’t afford a tow truck because they’re only paid once a week. That sounds like an issue of financial management, my friend.

“Tell me what to look up,” the CB demands. “Start by doing a Google search on ‘why am I such a needy dumbass,'” the OP responds. To the CB’s credit, that does seem to make them laugh, so they have some self-awareness. Incredible work, everybody.

More of the choosiest beggars ever: