There is apparently a subreddit for everything, and I was today years old when I discovered r/IDontWorkHereLady, which seems to be specifically used for instances when people are mistaken for employees by random women. I absolutely know that’s a problem, especially for people of color who are approached by entitled white women (and men). I don’t know that I necessarily believe this story told by u/Wiggle_it_loose, but he is being hailed as a hero by the subreddit’s fans.

He titled his epic story, “Douchebagette didn’t like my answers to her questions even though I was relentlessly honest.”

First, he explained that he has a “retail” face because he goes through this kind of thing frequently. People are supposedly constantly talking to him like he’s an employee at whatever store he is at.

All those encounters seem to have taught him to always be ready for a quick response, because when he was approached by a woman in a grocery store who he misogynistically describes as “Rush Limbaugh in drag” he was suspiciously ready with a million comebacks. 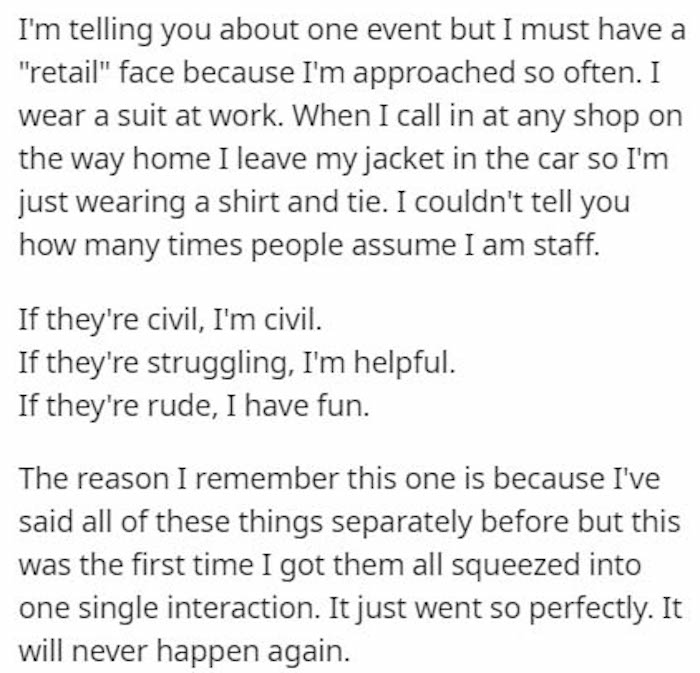 “I had called in to a large supermarket to pick up birthday candles,” he starts. “I first saw the woman being very rude to another customer for no apparent reason. Imagine Rush Limbaugh in drag. Sorry to put that in your head. She was just impatient and the other customer wasn’t moving fast enough for her liking so she was insulting her. She definitely ranked above asshole so let’s call her Douchebagette or DB for short.”

He continued, “As she turned I saw the “missile lock” in her eyes as she spotted me. She galumphed her way over. I decided to enjoy it and settled on being deadpan literal as a plan. I looked away.” 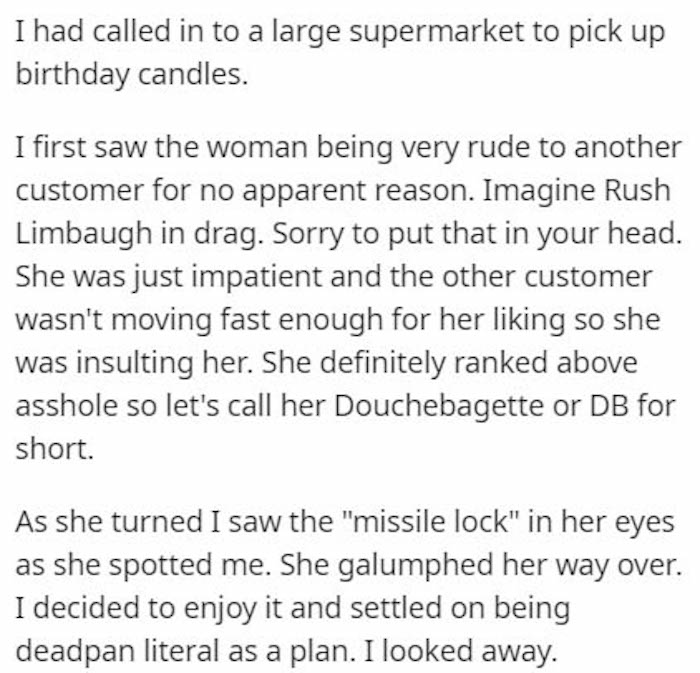 Here’s the script, according to the OP:

Me: Why, what have you done?

She paused for a second looking like a dog that had been shown a card trick. Then angrily asked:-

DB: Can you help me?

Me: I couldn’t possibly know. I don’t know what you want.

She makes a Tucker Carlson face. 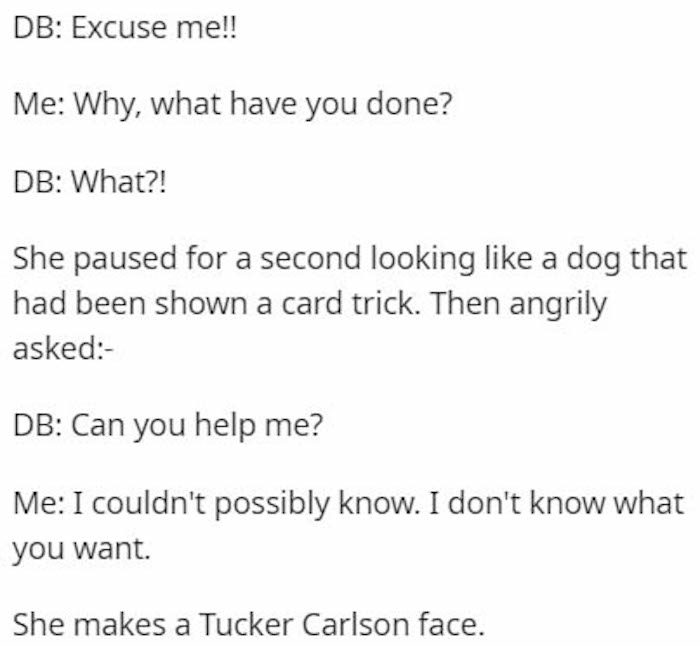 DB: Where do you keep your eyelash curlers?

Me: I don’t keep them anywhere.

Me: I’m certain I don’t. I’ve never owned any. My eyelashes manage to bend all on their own. I’m more than happy with the bendiness of my eyelashes.

DB: Huh? What? No, idiot, I mean the shop. Where in the shop are the eyelash curlers?

Me: I refer you to my previous answer. I never use them. 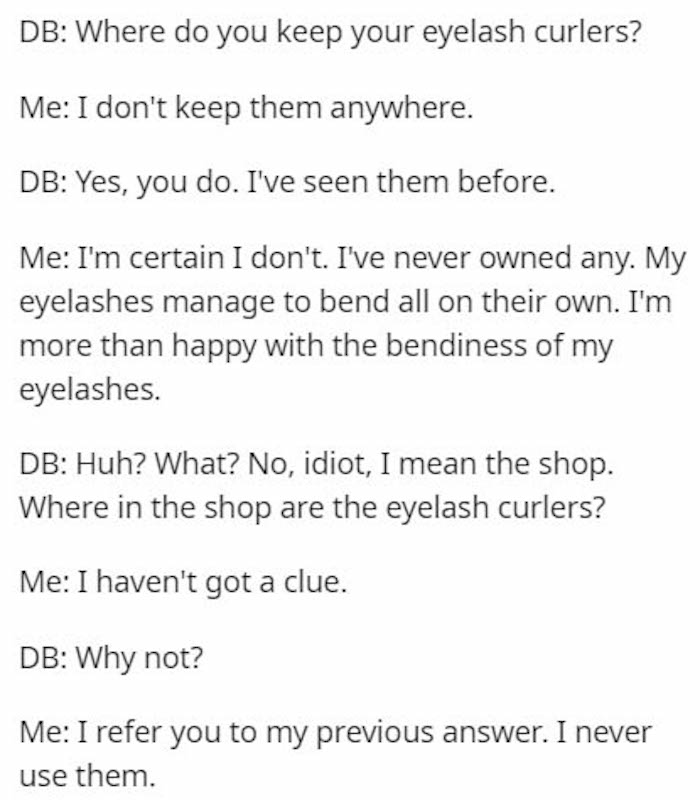 DB: This is insane! Are you going to find out where the eyelash curlers are, or would you prefer that I speak to your manager?

Me: I’d say neither but if I had to choose I’d go for option (b)

DB: What?? You want me to speak to your manager?

She shakes her head in angry confusion and says:-

DB: You just said you did.

Me: No I didn’t. You asked me which I’d prefer. If I was offered a rectal exam or a slap in the face I don’t want either but I’d prefer the second to the first. See how it works? (This is a phrase I use with my wife when she gives me sh*tty alternatives.) 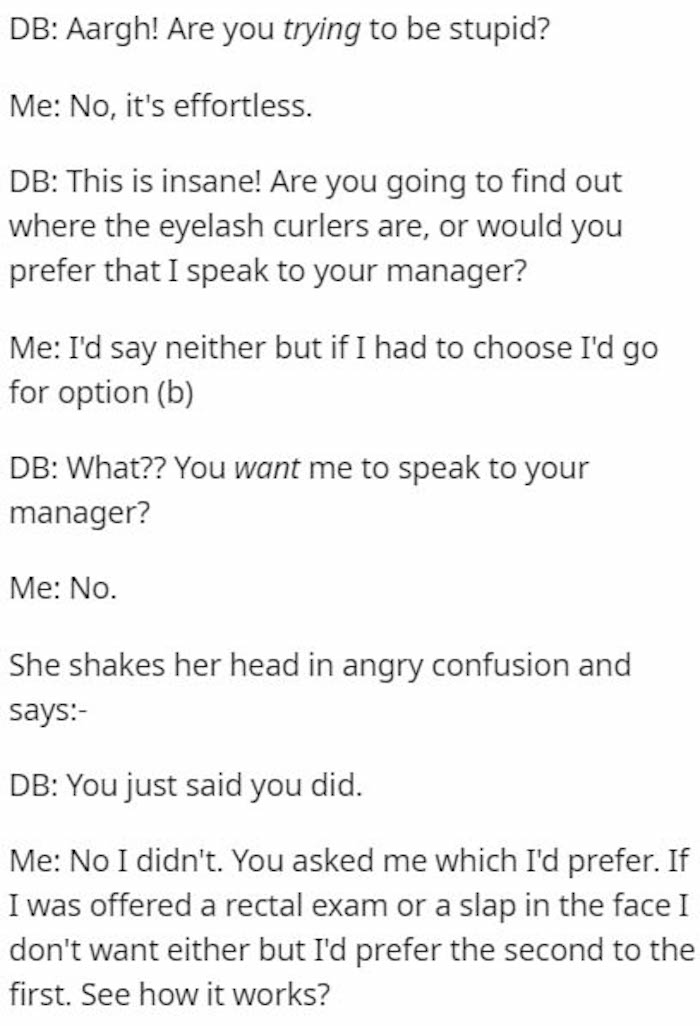 DB: This is RIDICULOUS!!!

Me: I completely agree.

DB: WHERE is your manager?

Me: I’m not exactly sure but my guess would be at home with his family. 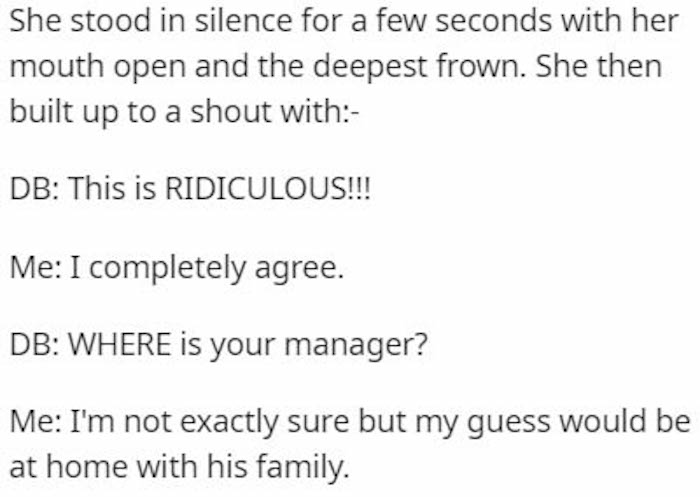 DB: AAARGH! You’re being STUPID! Who supervises YOU here in this store RIGHT NOW?

She actually stamped her foot twice when she shouted “right now”.

Me: Because I don’t need to be supervised. I haven’t needed supervision in a shop since I was about 9 years old.

At that point, the OP says an actual store manager was approaching. 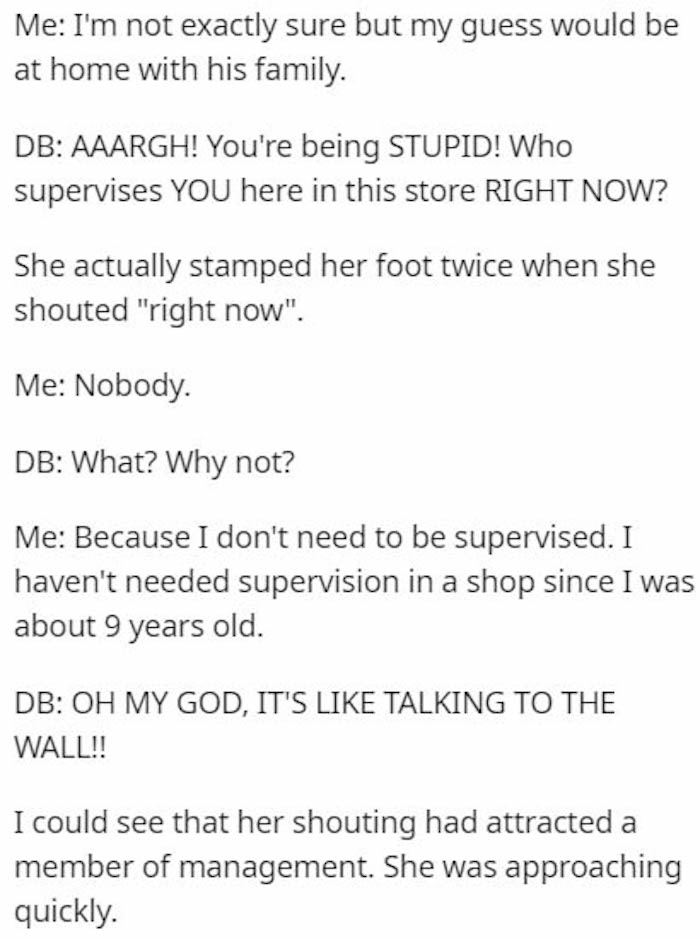 I think I saw a slight hint of understanding spread across her puzzled face.

DB: You do WORK HERE don’t you? 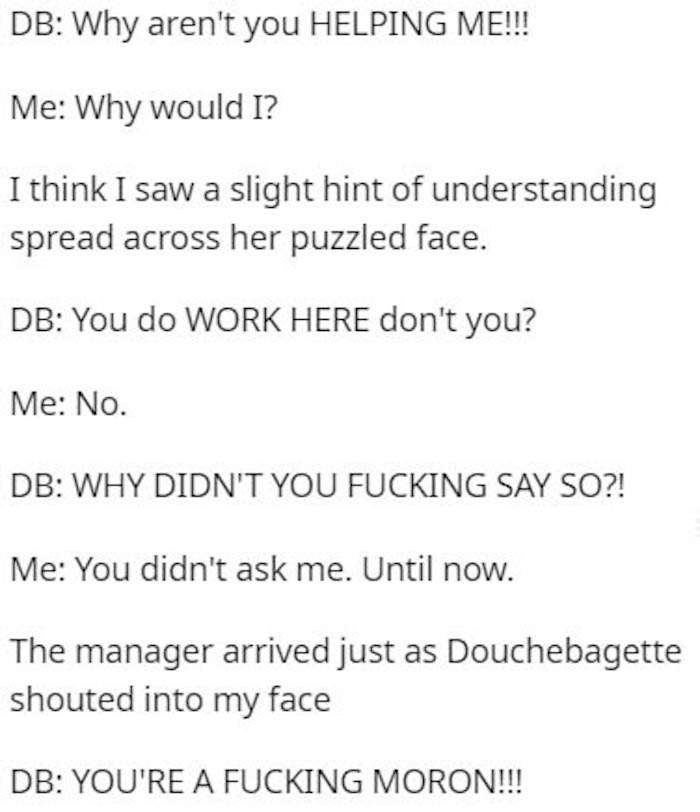 Manager to DB: Madam, please lower your voice and stop swearing. There are children in the store.

Manager to me: What’s happening Sir?

Me: I’m not really sure. This woman was being rude to another customer then she approached me and started to interrogate me about my personal grooming habits. She wasn’t happy with my answers and started to spit shout at me.

DB: NO, THAT’S NOT F*CKING TRUE. I WAS SHOUTING BECAUSE I THOUGHT HE WORKED HERE!

Manager: Whether he was an employee or not you can’t talk like that. You can’t abuse customers and we have a strict policy about abuse towards staff. We don’t tolerate it. 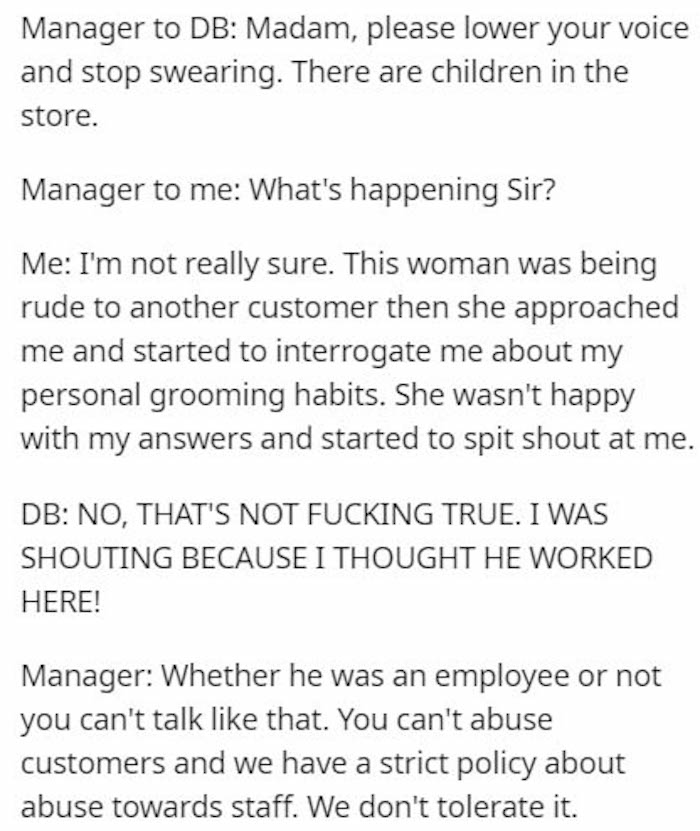 She was interrupted by the manager.

The manager pressed transmit on her radio and said:-

Manager to me: Are you OK Sir?

Me: Yes I’m fine I just needed birthday candles. Could you tell me where they are?

DB: WHAT THE F*CKING HELL IS GOI….

Manager to DB: Stop. Shouting. Stop. Swearing. If I have to warn you again you will have to leave the store. 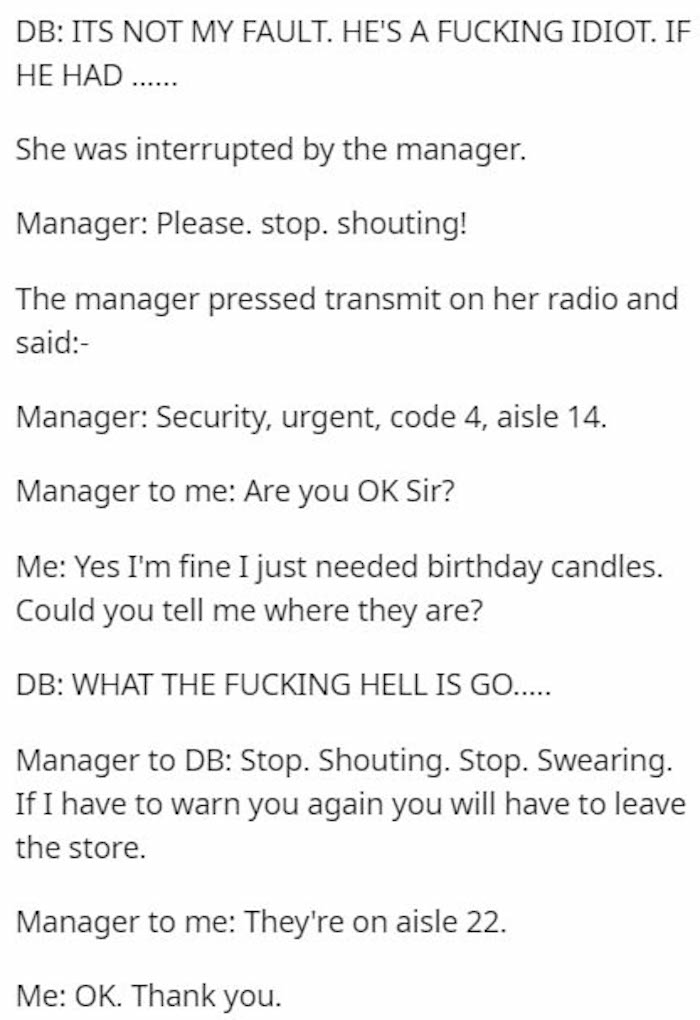 He concluded, “I could hear her shouting for another 30 seconds. The next time I saw DB I was standing at the self-checkout. She was being followed out of the store by the security staff. She was complaining into her phone, loudly but unclearly, about the shop, the staff and ‘some f*cking moron’ as she left empty-handed. Do you think that moron was me?”

All of this wordplay didn’t quite leave the OP satisfied, and he added, “I was wishing so hard for her to look left and see me but she didn’t. If she had shouted at me, regardless of what she said, I was going to raise my little box of candles and say ‘Yes thanks, I found them.'” 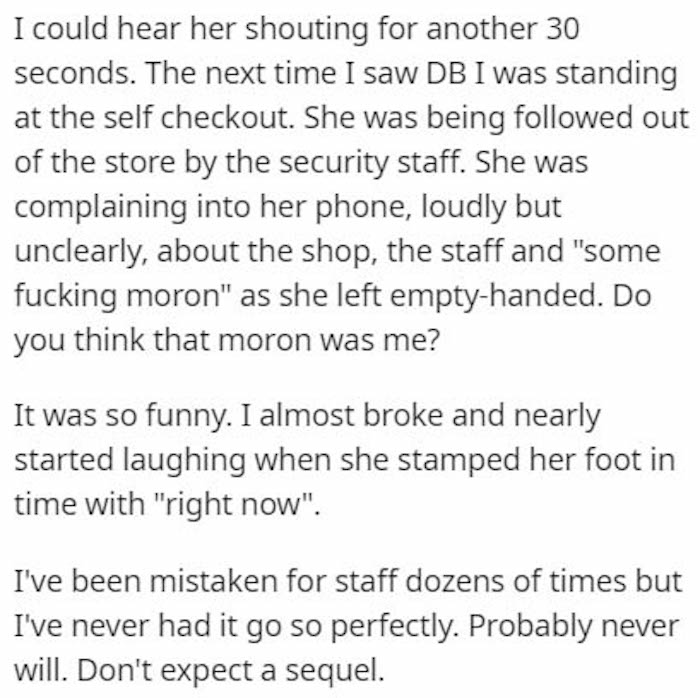 Did this really happen? Maybe. Does this woman sound awful? Yeah. Would I want to talk to this guy at a party? Definitely not. Enjoy being clever in the candle aisle, my dude.

More Karens being the worst: