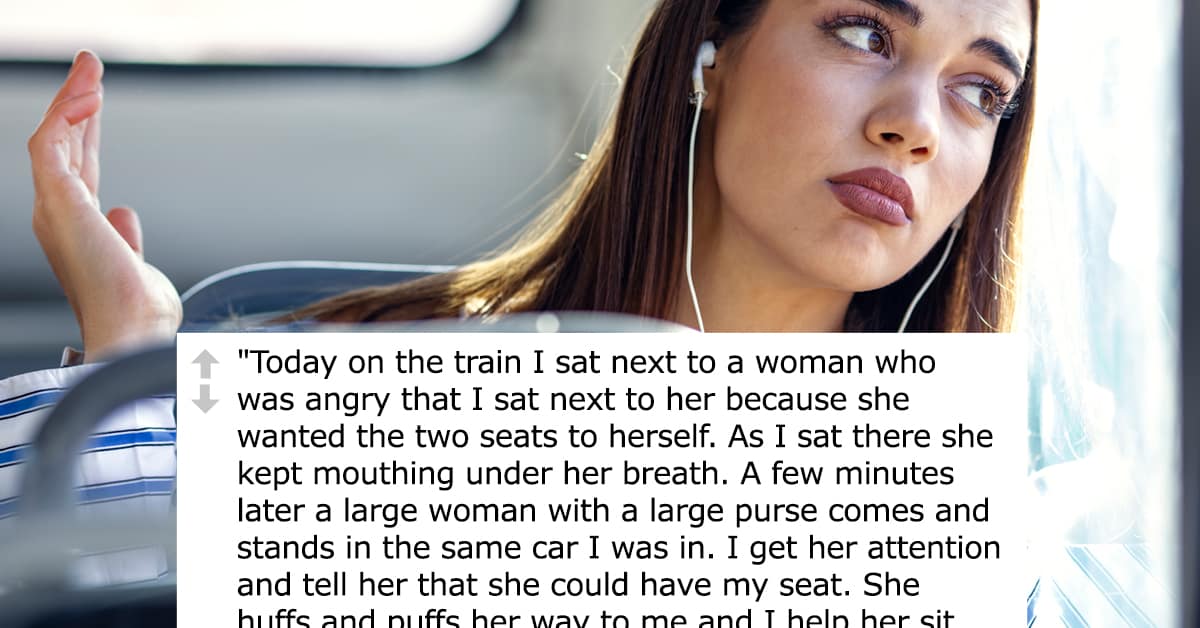 Have you ever wanted to get revenge on a sh*tty person by just straight-up making their day worse? Maybe it’s human nature, maybe it’s schadenfreude, maybe it’s the only way to stay sane in this world? Who knows. But look, we’re all just a little petty, amiright? So why not make the jerks pay for their behavior by stooping to their level? Muahaha.

Over on Reddit, user ObieousMaximum asked everyone a great question: “How have you made a rude person’s day worse?”

“Today on the train I sat next to a woman who was angry that I sat next to her because she wanted the two seats to herself. As I sat there she kept mouthing under her breath how she just wanted to sit there alone… blah blah blah. Despite the fact that I wanted to tell her that it was public transportation and she needed to get over it I kept my mouth shut. A few minutes later a large woman with a large purse comes and stands in the same car I was in. I get her attention and tell her that she could have my seat. She huffs and puffs her way to me and I help her sit down while grinning at the angry woman who was upset I’d sat beside her….

…I enjoyed watching her head almost explode from anger as the other large woman’s rolls and purse pressed against her for the rest of the ride. Anyone else have any of those subtle revenge stories? Edit: of course the one time I don’t check reddit, because I think my story was lame and won’t get more than five comments, it takes off. I am looking forward to reading all these stories…. Oh and I’d like to thank all the people that made this possible… my producer, all the guys in Fresno, Melvin, all the haters who said I’d never make it, Phil Collins, OAG, GGG, the White House… yadda yadda yadda… Edit again: This lady is a regular and a known seat hog. I’ve seen her get into arguments before with people because she wants two seats to herself. Everyone pays to ride the train so if there is a seat open then it’s up for grabs.”

Here’s what the Reddit community had to say. PS: There sure are a lotta vengeful folks out there. Not sure if that’s good or bad…

“I was working as a manager in a big nightclub about a year ago. I dont wear a uniform, but have a radio and run the security team. The venue has a great smoking section that looks out onto the street. One night the venue was packed so I did my usual roam making sure that there were no problems, however, it was too packed to walk through the smoking section, so I walked down the street instead, but could still very easily see into the smoking section. One guy stares me down, then calls me over, and starts swearing at me for no reason and telling me that “pieces of shit like you could never even get into a venue like this.”

He obviously had no idea I was the manager, however, I didn’t want to have security get into a fight inside with him. The guy kept telling me he would punch me out etc. and was clearly trying to look macho to impress someone. So I agreed and told him to come and meet me outside and he could even have a free swing. He puts his drink down, takes off his jacket and storms outside. Once he walked outside, I walked back inside and told security not to let him back in. The look on his face when he realised I ran the place was priceless, and then the realization that he couldn’t get back into the club was amazing. It was the easiest and most fun removal I have ever done.”  —rushn006

“Something similar happened to me once when I worked in a bar… there was a big table who spent around £800 in an hour and the PA of the guy who’s table it came to the bar demanding a drink for her boss when I was clearly serving someone else. I told her to wait like everyone else and she slammed a glass down on the bar and it smashed at which point she ran away. After some time she returned and I was serving someone else. After demanding and being refused a drink she leant over the bar and said “If you don’t get me that fucking drink I’m going to smash your head across the bar.” I’m not someone who would take this normally but on this occasion, it was much more satisfying to look her in the eyes and say “Well your night is over” and laugh while watching 2 security guards eject her. I hope she got fired, vile little woman.” — queenieweenie

“At the end of a long commute home, after a hard week, I went to a Millies Cookies store just before closing time. As I walked up to the counter, not 5 feet from it, some guy ran from behind me and tried to cut in front of me – the girl working there insisted I was first (thank you). Outraged at what that guy tried to do, and noticing there weren’t many cookies left, I said “Hi, I’ll take absolutely everything you have”. Cost me close to $60, but it was so worth it.”—shuffledy

“I work in customer service and have no shortage of asshole customers. I often find that a nice big smile and a “have a nice day” at the end of an insulting customer’s rant makes them angrier than any insult I could have thrown back at them.”—poopjungle

“When I was working a shitty job in my younger days, a customer was upset that he had to wait in line like everyone else before being able to make his purchase. He actually said, “Do you know who I am? I own hotels!” To which I replied, “Well sir, I’m sorry, but this isn’t Monopoly, this is Krispy Kreme.” He was not pleased.” — TheGentileWookie

“I watched a lazy shopper park their grocery cart right behind another persons car instead of putting it in the cart return. I got out of my car, ran up and moved the cart and put it behind her car. I then ran off and watched her have to get back out of her car since she couldn’t back out, and then finally proceed to put up her cart the right way. I felt like a champion of the people.” —eljesus

“I’m in a massive line at a store. I’m next in line, but the person in front of me has a shitload of stuff. A helpful clerk sees the mess and opens another isle saying, “I can help the next customer.” Well, that’s me. However, the checkout counter has two sides- a right and a left. It is set up for people to come to the right side, but the left can be used as well. As I am stepping over to her counter, this asshole from the very end of my line is sprinting to her counter, pushing people, with his partner in tow. He arrives right before me. They have a mountain of items in their cart which he starts throwing on the checkout counter. I am standing there on the other side with my one item, burning with rage. Checkout girl waits until he stacks all of his shit on the counter, looks at me, looks at him, and says to him, “I’m sorry sir, you’re on the wrong side. You’ll have to go to the end of the line.” Which is now massive. I put on my biggest grin, made eye contact with him as long as possible, and loudly told the clerk how awesome she was.”— IsaidMarkItEIGHT

“Just the other day I was at a Chinese buffet and the three people in the booth next to me were questioning the waitress (she appeared to be Asian-Hispanic) about voting for the President and who she planned to vote for. She had trouble understanding them and communicating that she could not vote. They immediately began taunting her that she shouldn’t be here if she couldn’t vote, that she didn’t even know who the President of the United States is, and then took a picture and said they would post it on Facebook. I later found out the waitress was on a school visa and couldn’t vote but was unable to convey that to them. After the waitress walked off, one of the girls at the table (the one who took the pic) looked up and asked me where I worked because I looked familiar.

When I replied the local university in the social work department, she commented that she had recently been in my office to apply to our program, to which I replied Yes, I remember you and I’m also on the admissions committee [followed with a wink]. The color drained from her face and she knew she was screwed. Karma’s a bitch.” — Instantwinner1

“Guy got out of his car to express some road rage to me. I just got out of my truck, walked past him, pushed the lock button on his door, closed it, walked past him again (his mouth hanging open this time), got back in my truck and drove off. He seemed to be frozen with confusion.” — Tristan2353

“Jackass in the gym once was making some kids of about 14 feel crap telling them to put some man weights on the bar and to stop being pussies and girls and real lame cliche shit. anyway every time they find a new workout he comes and repeats the process lifting bigger and trying to embarrass them. I was annoyed but tired and let it slide. Only it happened again, same kids came in 2 days later and he was there also. he starts doing exactly what he did before. Well that was it. I walked up right next to him doubled what he was lifting and repeated everything he had said to the kids in the last 5 minutes. he quickly moved on and went to another exercise. but I wasn’t done the kids were looking at me like I was batman. I followed the guy to the next 3 exercises and did as he had done saying the same things. Then he left. never saw him at the gym again but those boys sure came back and have been making steady gains for over a year now. TL;DR put a gym show off douche bag in his place, became gymbatman.”— fightmeimjackedirl