The subreddit r/TIFU is always a weird mix of stories: the acronym stands for “Today I F*cked Up” and that can mean a lot of different things. This story from u/commander_reload is a very original form of f—king up, which you can tell from his story title, “TIFU by discovering my deceased mother’s Kindle library.”

He starts off by saying this happened a few years ago, but he remembered it because his wife had just sent him the photos of the situation again, bringing back all sorts of memories he says require “eye-bleach.”

Setting the scene, I (36M at the time) and my older sibling (41F) were working through our recently-deceased mother’s (74F) possessions in order to clear her house. We stumbled upon her Kindle during our room cleanups, and my sister came out with the fatal line:

“Awww, she used to love reading. I know she’s bought tonnes of books from Amazon over the years. I wonder what she’s read recently?”

Blithely, I opened up my mother’s Kindle library and, well…

The pictures are of his mom’s smut collection, which focuses quite a bit on diaper play. More than I would want for my mother, personally, not to kink-shame.

It’s just a kink most people don’t want to think about in relation to their parents, unless they are EXTREMELY kinky themselves: 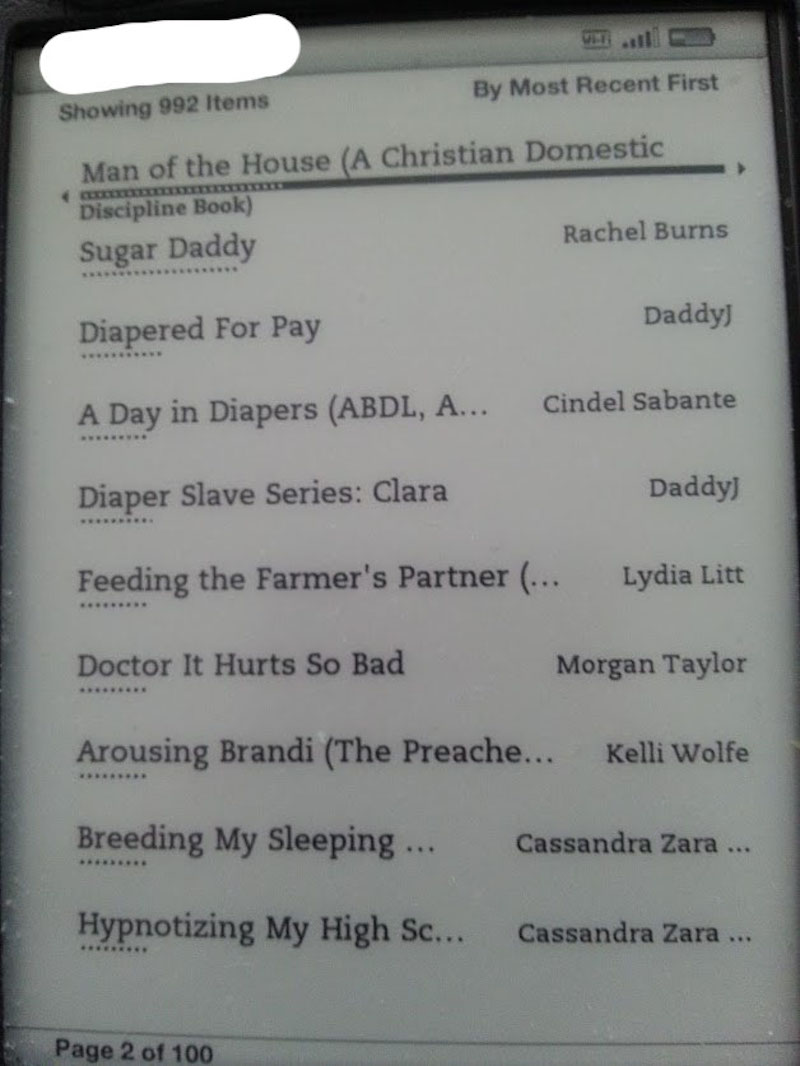 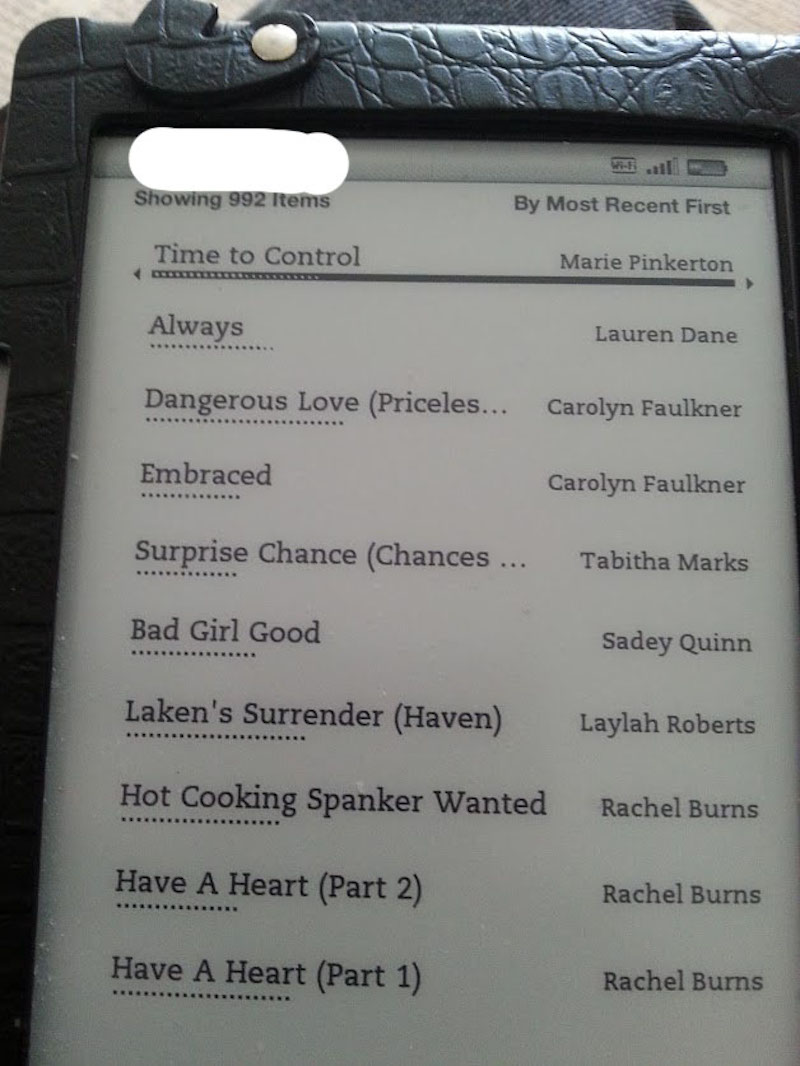 The OP says he “snapped these photos in a moment of insanity” because he felt he needed some sort of evidence of what he discovered. For what? To show his mother in heaven when they meet again? I guess for Reddit clout is enough of a reason. He also added a bit more context to her interests:

“Diapered for Pay” and “Breeding my Sleeping Wife” are particular gems, however “Hot Cooking Spanker” takes on a new dimension when you consider her former occupation as a chef.

Suffice to say, the expression on my face made my sister grab it out of my hands. Turning bright red, she muttered “I knew I shouldn’t have introduced her to 50 Shades”.

Ah, 50 Shades gets the ladies every time. For a lot of people, this would be their worst nightmare. Even death wouldn’t save them from the embarrassment of their kids discovering their sexual interests: 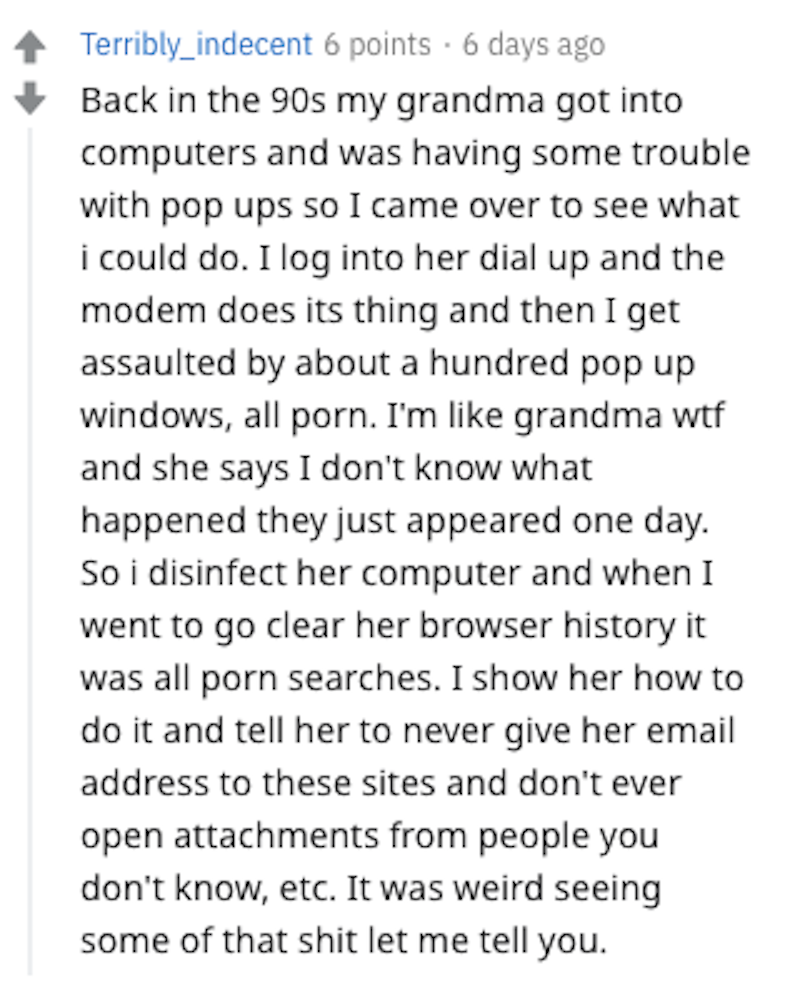 Related, light-hearted note on that. I was tasked to fix my dad’s laptop after his passing, as I am the only tech savvy in the family. Managed to get into the laptop and I see a suspicious document on the desktop. My heart sank, thought it was going to lead me down a rabbit hole of truths I’d rather not know. I opened it up,

There’s a ”Hello to whoever is reading this” paragraph at the start, followed by some email accounts and sites, like imgur.

The hunt led me into suspicious folder after folder on the computer, and finally I stumbled upon a picture that basically said: hope you had as much fun doing this as I had creating it, I am dead if you see this picture, there’s a hidden USB stick in a drawer upstairs. I go upstairs next time I am over at his old house, find said stick, and on it, there’s another text document. It read only ”Got you” and nothing else. I am just sitting there in awe, my old man literally sat for days in dementia caused by cancer, and all he wanted to do was one last joke for whoever was going to open up his computer.

Many others were fully supportive of mom’s tastes.

The OP appreciated everyone’s interest and their support of her interests. He edited his original post to clarify that he respected his mom’s choices:

Lastly, I fully appreciate that yes, my mother had sex like any other person. It’s more the somewhat unusual choice of… “content consumption” at her advanced age which was slightly eyebrow raising. Still, if it got her pulse racing, good for her.

Good for her, indeed! RIP to a real one.