On the subreddit r/TIFU, people share their stories of making completely stupid mistakes. This one posted by u/Chingparr freaked me out as I read it, but since everyone ended up okay in the end, it’s just a good lesson on how to handle your drugs.

The OP says that when quarantine restrictions were lifted, he decided to have his dad, stepmom, and adopted siblings over to watch the UFC event. He says his sister is on the Autism Spectrum, and though she’s an adult, she has the mindset of a much younger person. He says she “plays with dolls, watches cartoons, lies to avoid getting into trouble, and tends to eat junk food before dinner.”

That’s relevant because the OP has recently made a pan of marijuana-laced brownies. He says his homemade edibles help with insomnia…sure. Anyway, they’re pretty strong, usually a piece about the size of a tiny Halloween candy bar is enough to get things going. At the party, his sister asked for something to drink and he directed her to the fridge, forgetting his stash. And she got into it.

He says she ate about six of them, which he discovered too late:

My sister however, not knowing that the brownies had weed in them, decided to eat at least six of them, maybe more. After dinner, during cleanup, my fiancee and I are doing dishes and loading leftovers into our refrigerator when I noticed that my edibles were not where I left them. Imagine my horror when I noticed that a nice sized chunk of them were missing from the night before. The panic instantly entered my heart, and I knew I was in for a front row, live performance of r/itooktoomuch. I’m 32 years old, but I’m panicking like a little kid that knows he’s about to get grounded for the next century.

I walk outside to announce our new debacle and immediately notice my Stepmom brushing my Sister’s hair from her face. My sister on the other hand, is higher than a giraffe’s ballsack. She is staring into an empty void, scanning blankly at the world around her and having God-Knows-What kind of thoughts induced by the massive dosage of 11-hydroxy-THC that her body is processing right in front of us. I had to come clean. My Stepmom is thinking Sister had a stroke or something, and wants to take her to the hospital. I came clean to both of them and told the truth, Sister got into my edibles and is most certainly stoned to the bone. My poor sister is babbling incoherently, but sometimes completes random thoughts.

“Habababa Boo. My birthday is in August. We’re all gonna die! Steak and Shake. STEAK AND SHAKE!” – Actual quotes from Saturday.

He put his sister to bed until the family was ready to go, and then she continued to sleep through her wild edible ride.

In an update, the OP wrote, “My sister is totally fine! According to my Dad, she slept it off for roughly ten hours, and woke up in a good mood. She sent me a youtube video of cats learning how to ring bells for food earlier this evening. We’re good!”

Thank goodness. The comments have turned into stories about people accidentally ingesting THC, and all the lunacy that involved: 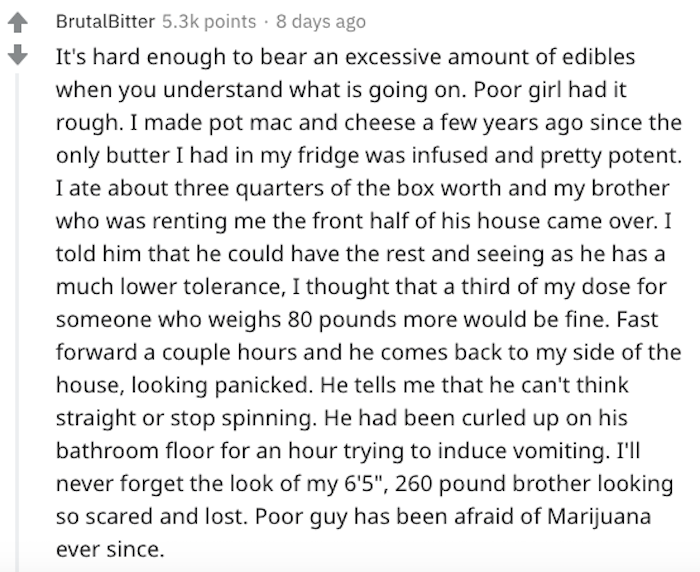 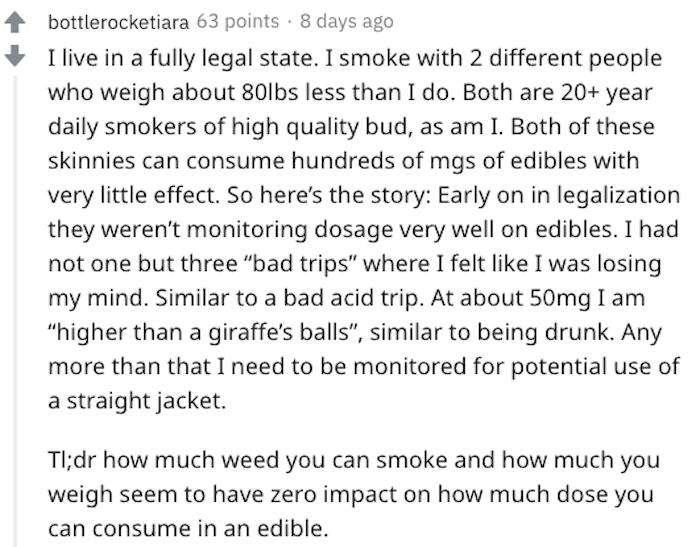 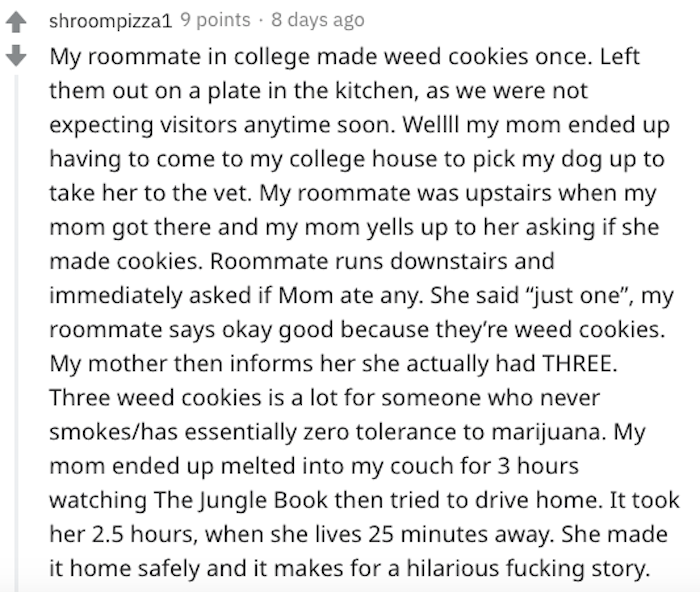 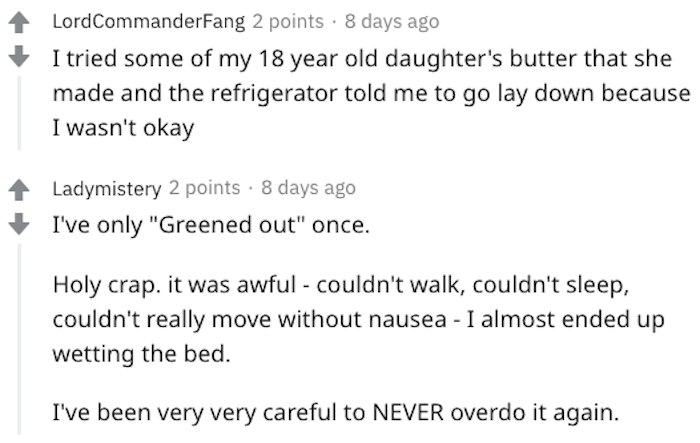 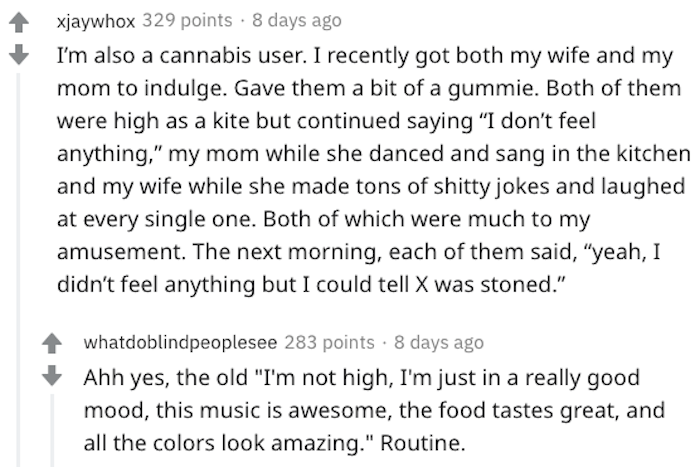 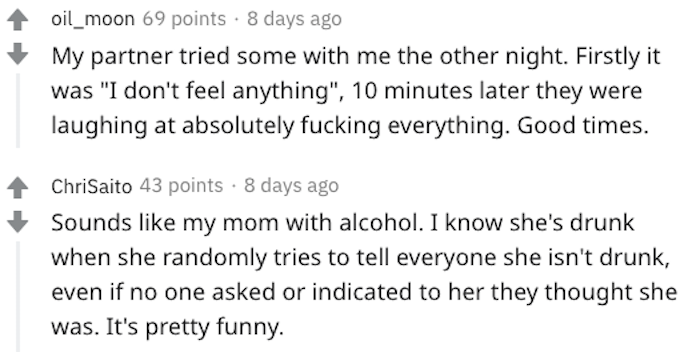 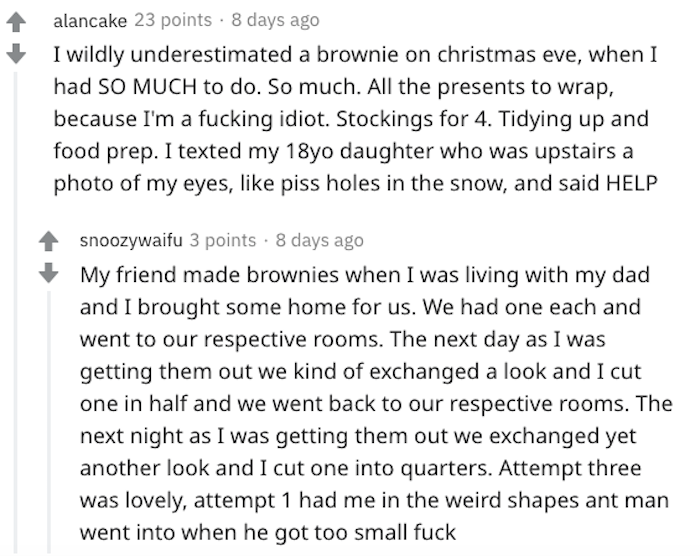 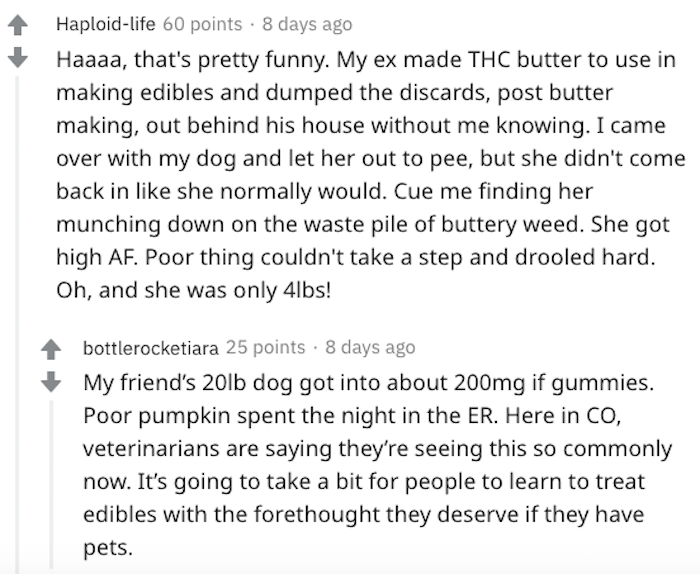 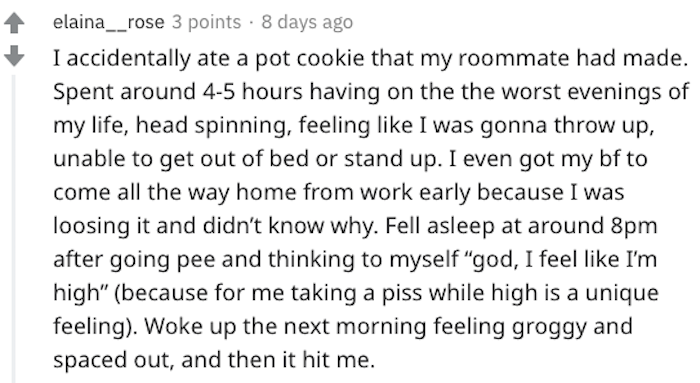 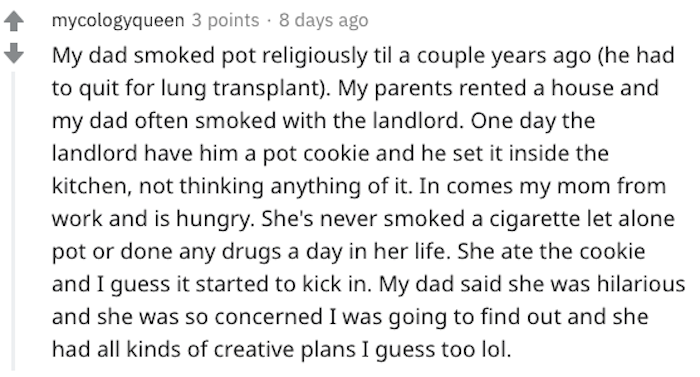 I thought the lesson was don’t eat other people’s food without asking, but maybe the lesson here is don’t leave out your edibles, because you can’t stop people from eating stuff without asking.