If you’re in need of a wholesome story you’ve come to the right place. For once, Reddit is proving a sweet story about a relationship instead of an extremely weird one about buried beans or frog hoarding. This one was posted by u/throwralovemygayson to r/relationship_advice, who says he’s the dad to a 20-year-old man, and he writes, “He’s absolutely my pride and joy, and there is nothing he could do that would ever make me love him less. “

He adds that when he was younger, he had an addiction to heroin and only saw his son 2-3 times a year up until he was 12. At that time, his son told him he was being abused by his mom and her boyfriend. Dad got clean and took over sole custody. Since then, they’ve been tight as hell, and OP clearly loves his son a lot:

He’s everything a man could want his son to be; he’s uniquely kind and fiercely loyal, he’s unflinchingly brave, he’s incredibly generous and, despite the horrors he suffered as a child, he’s unfailingly positive and sunny to the last. Somehow I of all people was bestowed with the honour of watching him grow from a sweet young boy to the greatest man I have ever known. I cannot stress enough my pride in him.

Dad says that his son was accepted to a great school across the country and went. They still see each other every other month. His second year in school, he moved in with a “friend” off-campus. Dad says he’s thought his son was probably gay since his teens, but now he’s pretty sure that his son’s friend is actually his boyfriend.

For quarantine, his son came home and asked if his friend could come as well, since his folks are in another country and they don’t get on well. Dad said no problem at all. But things are getting a  bit weird:

They’ve been back at mine for about six weeks now. They think they’re being subtle I know, but I’ve caught them doing coupley things on several occasions now. The “friend” has slipped up a couple of times and called my son ‘babe’ and ‘sweetie’ in front of me, which I pretended not to notice for the sake of saving embarrassment. There have been nights where we’ll be watching a film with the lights off and, thinking I can’t see, my son will have his arm around the “friend”. One day I walked into the lounge and I’m positive they’d just been kissing and were trying to cover it, though I admit I have no confirmation on that one. The most solid evidence, however, came a few mornings ago. I get up very early to go for runs in the morning (hence why I’m making a reddit post at five in the morning haha). As far as I was told, my son was sleeping in his childhood room and his “friend” was in the guest room. I don’t know what possessed me to do so, but on Tuesday morning I cracked my son’s door open to check on him like I used to when he was a kid. Lo and behold, they’re both asleep, snuggled up together, in my son’s bed. That’s more or less solidified for me that they’re together. I didn’t say anything, just shut the door and went for my run, and I haven’t mentioned it to them yet.

What I want advice on is this; how do I let my son and his boyfriend know that I’m okay with them being a couple and they don’t have to feel like they have to sneak around in my house? I want them to be comfortable here and I want them to know I support them both no matter what. Or is that not a good idea? Am I better off leaving it alone and waiting until they tell me themselves, if they ever do? I obviously don’t want to force either of them out of the closet, but at the same time I hate feeling as if they feel like they’re being forced into the closet in my house. What’s my best course of action here??

What a sweetheart. The post completely blew up, because everyone wanted to help this man let his son know everything would be okay. Also, it seems like quarantine could go on who knows how long, and this situation isn’t sustainable. Folks offered all sorts of encouragement and advice, but the basic message was “TALK TO HIM.” 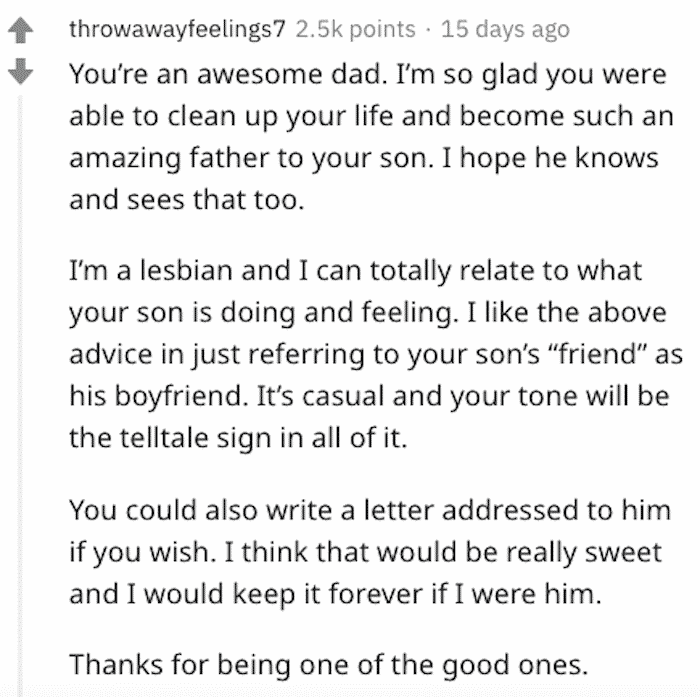 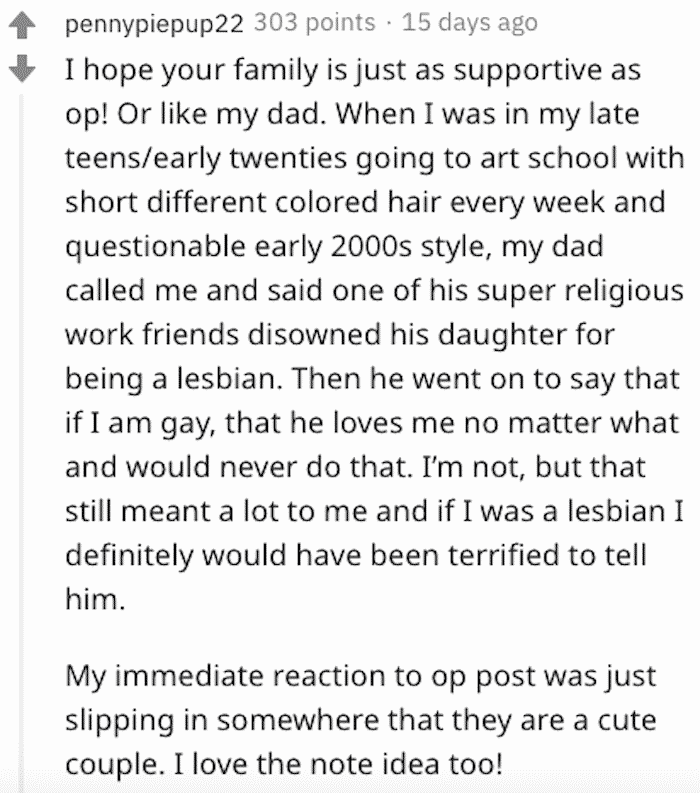 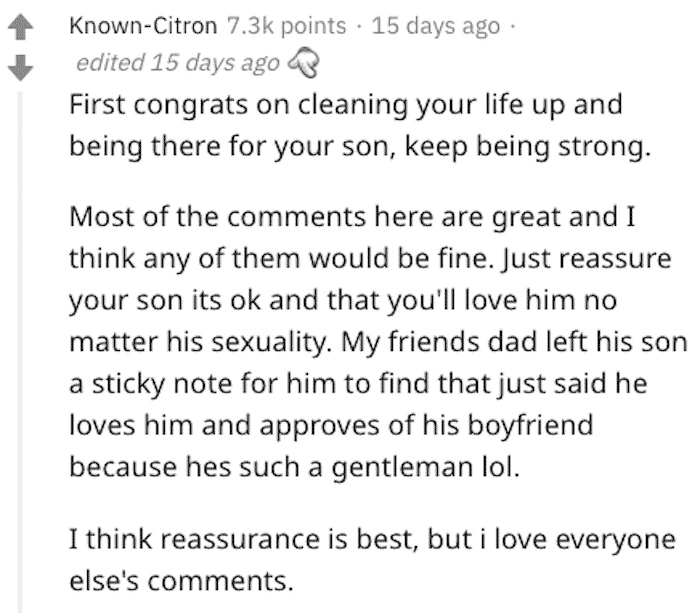 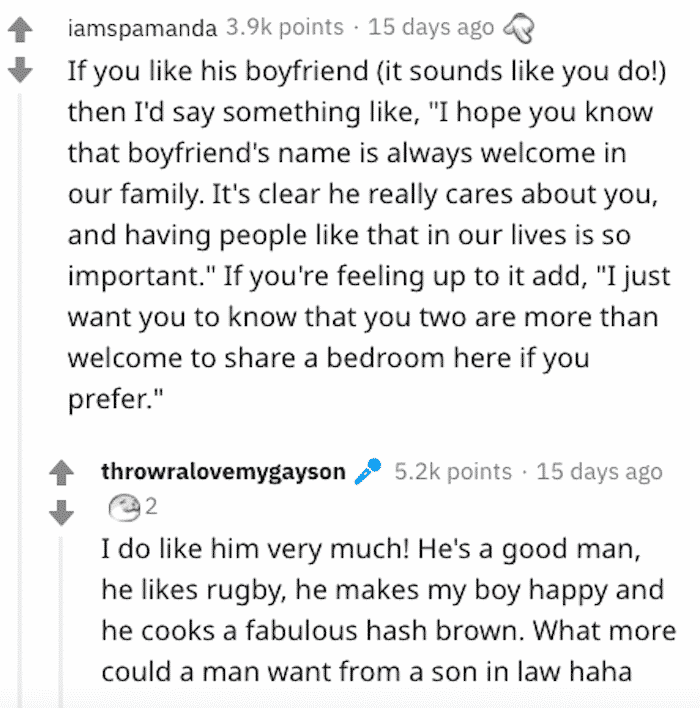 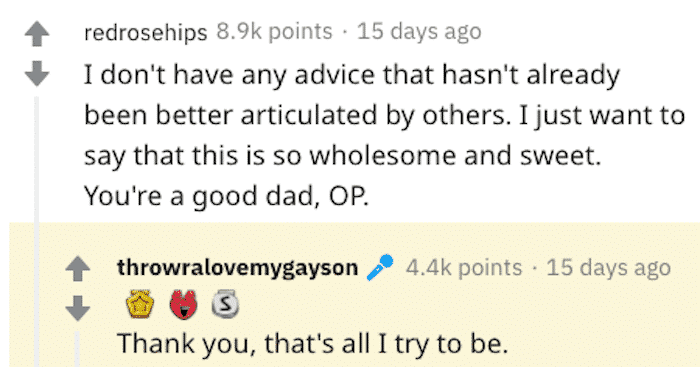 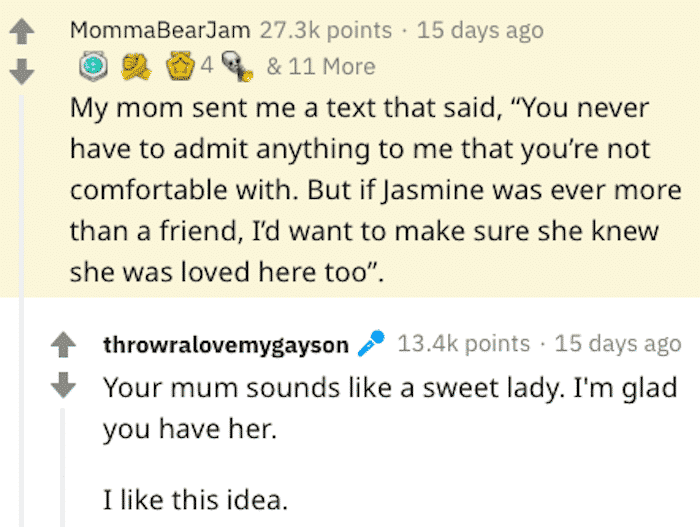 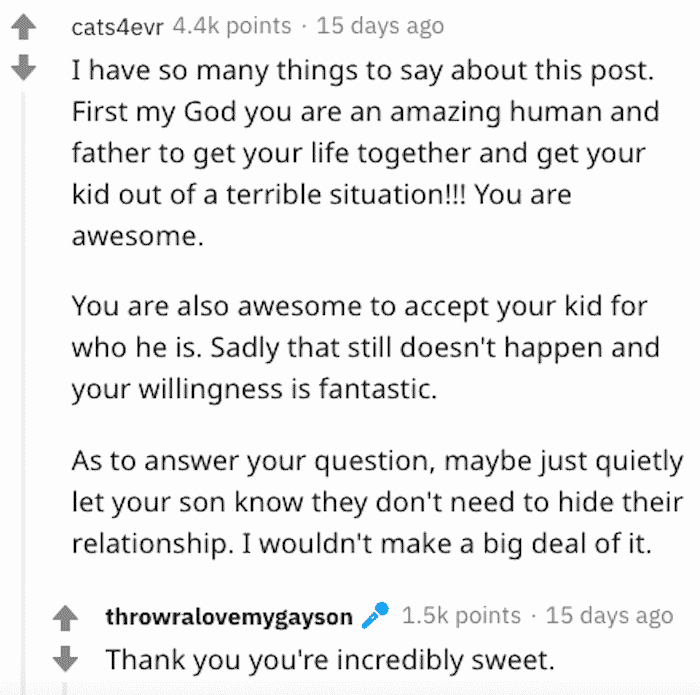 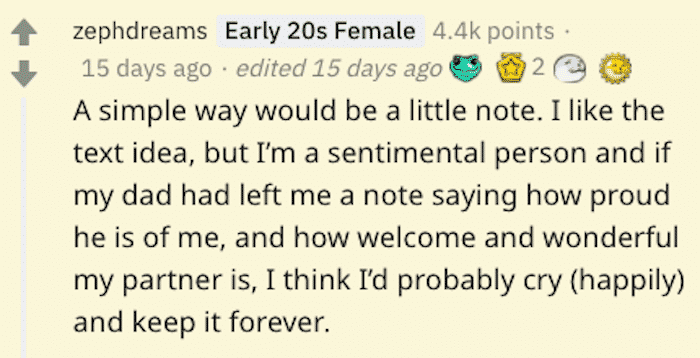 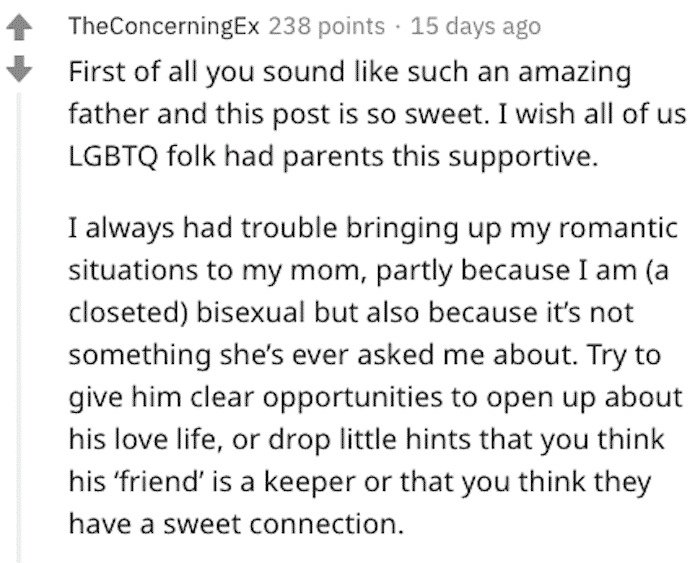 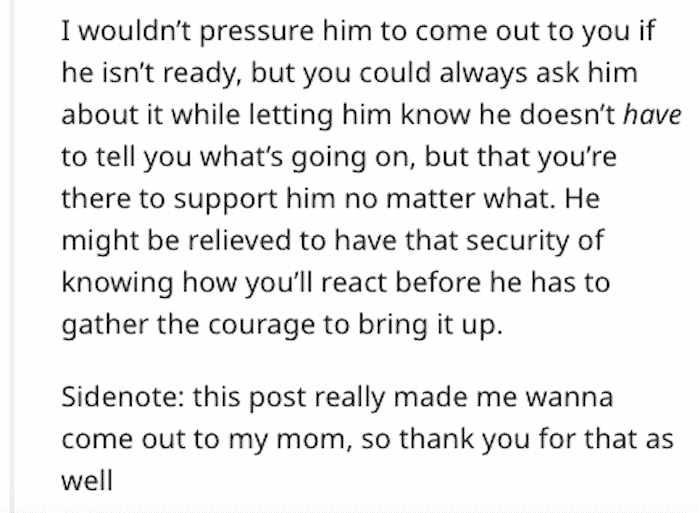 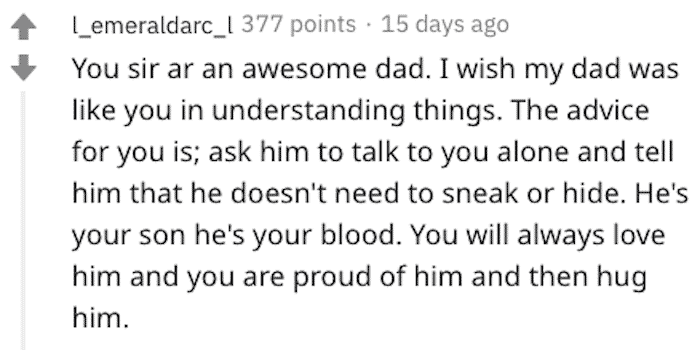 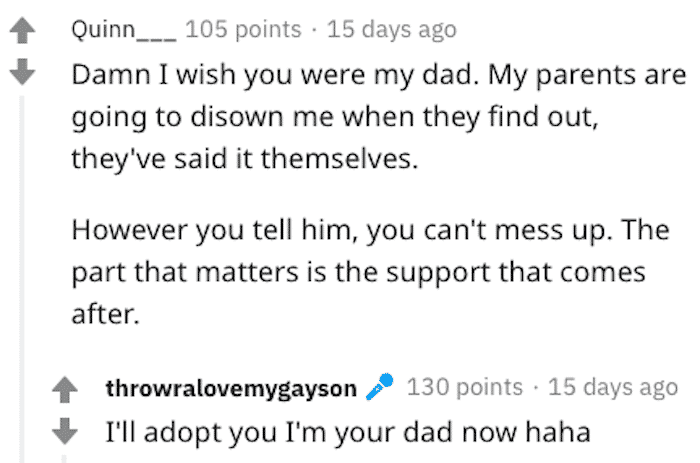 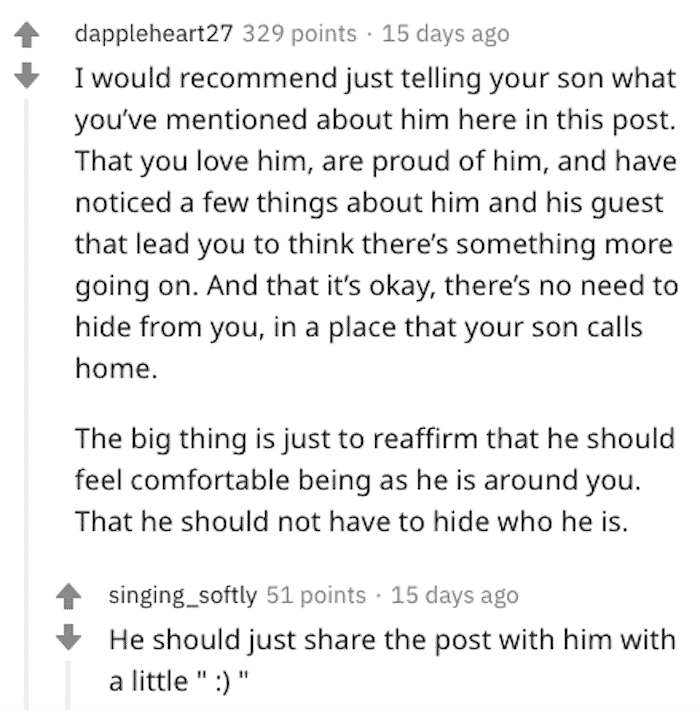 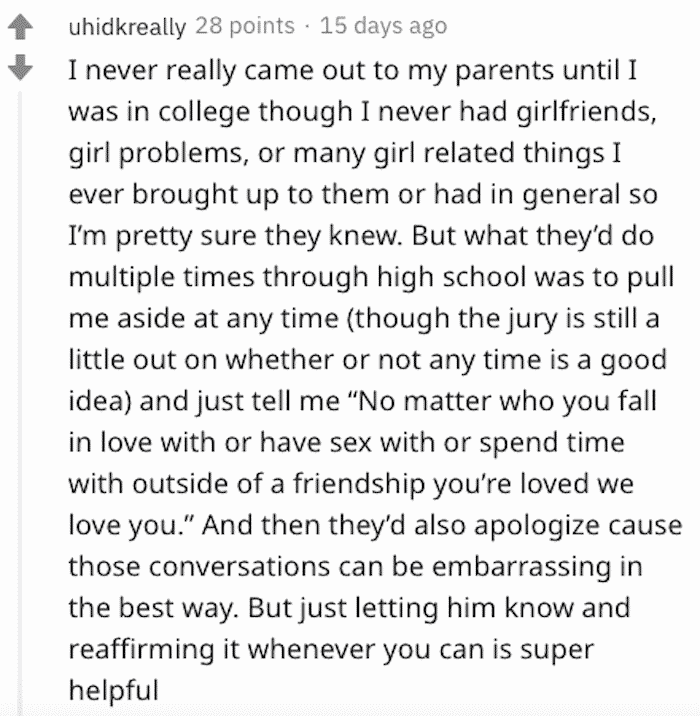 Which the OP did. He shared an update later:

My son was busy with some assignments both for his freelancing job and his uni work most of the day and I didn’t want to disturb him so I waited until after dinner to chat. “Friend” went to have a bath while my son and I watched telly. I tod him face to face “Son, I love you very much. You don’t have to tell me anything you don’t want to, but I want you and [friend] to feel comfortable being yourselves in my house and you don’t ever need to hide anything from me, alright?”

Well, it turns out a hell of a lot of you were right. Son burst out laughing and said “oh thank God, I reckoned you’d clicked on but didn’t say anything because I didn’t want to make you feel weird”. Basically we’ve each been pussyfooting around the topic because neither one of us wanted to make the other uncomfortable talking about it. We had a bit of a chat and he confirmed that I’m right in thinking they’ve been together since their first year of uni and that’s why they moved in together in second year. However, apparently I’m not as brilliant and intuitive as I thought because apparently one of his friends in secondary school was his boyfriend for a year and I had absolutely no idea haha. He went and talked to the boyfriend after his bath, and then we all had a bit of a further chat. Sadly a lot of you were right that the reason boyfriend doesn’t have a good relationship with his parents is because he came out to them a few years ago and they effectively disowned him, so I made sure he knows that he’s a part of our family now.

We must protect this dad at all costs. He is the kind of parent everyone needs—accepting, loving, supportive, and with a sense of humor about themselves. And now he has two sons. Okay, that sounds weird, but you know what I mean.

More of the sweetest dads ever: