Things are escalating in every household. Lonely people are going mad under quarantine, folks in relationships are going twice as crazy, and anyone with children was off the deep end by day three. Even in the midst of all this cabin fever, a story from a man who was dumped over beans has taken the Internet by storm. Beans!

Originally posted to r/Relationships on Reddit, it has since been screenshot and posted all over Twitter, and has resurfaced on other subreddits after being deleted by the moderators. The user who shared it, u/ThrowRA_BeanDrama, is supposedly a 30-year-old man who was living with his 30-year-old girlfriend when things blew up.

He says he ordered supplies for them, including 45 cans of beans. He went to the cabinet to find beans for chili and discovered they were all gone.

I asked my girlfriend and she told me she buried all of the beans in the woods.

At first I thought she was joking, but she explained, no, she had buried the beans in the woods. WTF?

I asked her to explain and she told me she was afraid that “if things get bad” we might have to worry about “looters or whatever” and that the beans would be in danger of being stolen. I said I thought this was completely ridiculous and unlikely. She became angry at me and said she “is protecting our beans.”

He says his girlfriend would dig up beans if they needed them, but wanted to keep them there in case “things get worse.” Naturally, he asked her why she didn’t bury everything valuable, but in the dystopia his girlfriend is imagining, beans are the highest form of currency. She told him she plans to keep buying and burying beans for the foreseeable future.

He then got upset and demanded to know where they were in the woods for his dang chili, to which she responded, “I will never jeopardize the beans.”

My (30 M) girlfriend (30 F) buried all of my beans in the woods and won’t tell me where, causing a fight between us. pic.twitter.com/bPBcSd1n0n 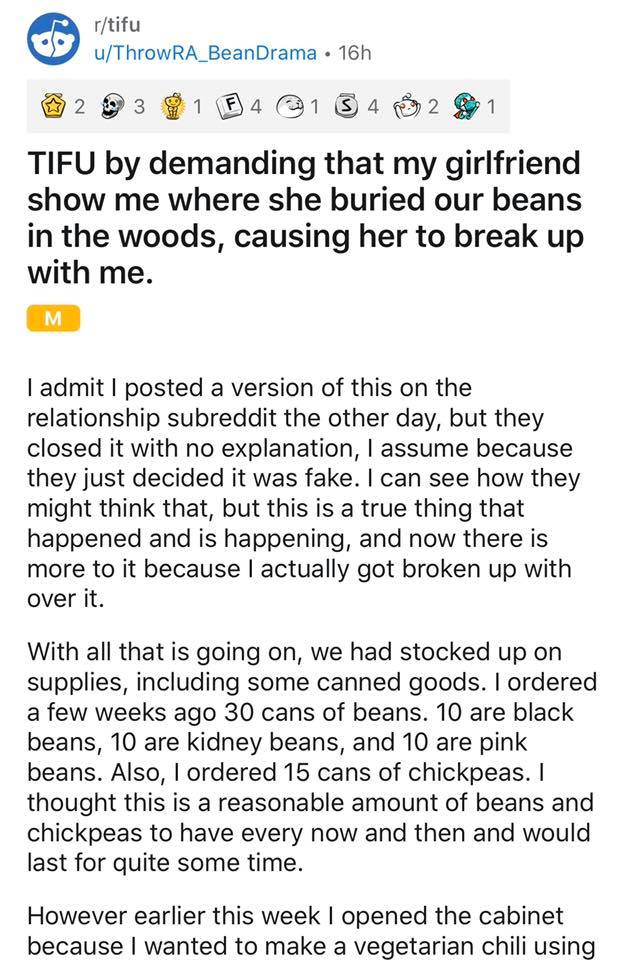 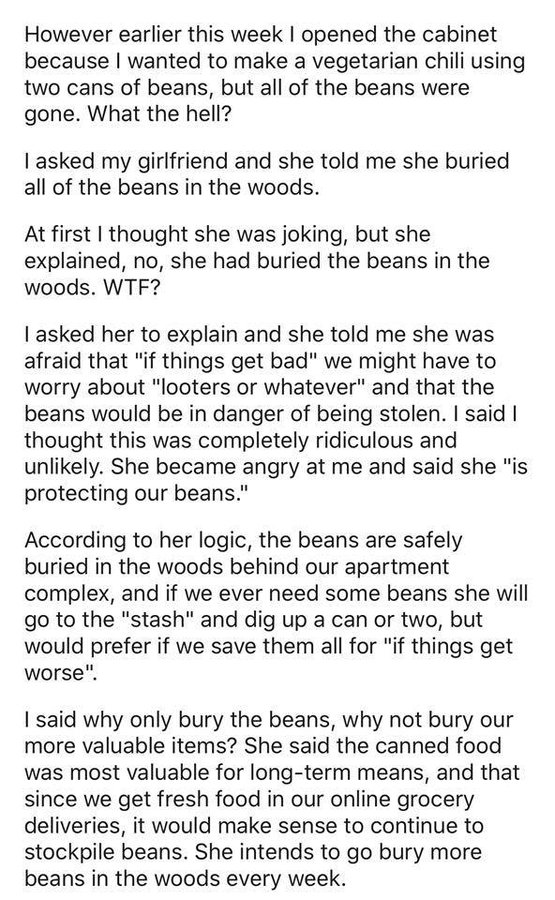 The next day, things exploded. The OP writes he felt this was something he couldn’t compromise on and demanded to know where the beans were and threatened to move out if she wouldn’t tell him. Then the tables were turned:

In hindsight I should have just let it go and created my own hidden stash of beans in the apartment, and given her time to maybe cool down about this bean burying scenario, but I blew it all out of proportion. Yeah it’s weird to bury beans in the woods but why did I have to press it? What’s the harm at the end of the day? In the grand scheme of things? But I kept demanding her to take me to the beans, or at least draw a map or something, and finally she BROKE UP WITH ME. Over the beans. I have lost the love of my life because I couldn’t let the damn beans go. I am in disbelief. She moved out. Not only am I heartbroken but I am now paying full rent instead of 50% which is a huge financial issue for me. 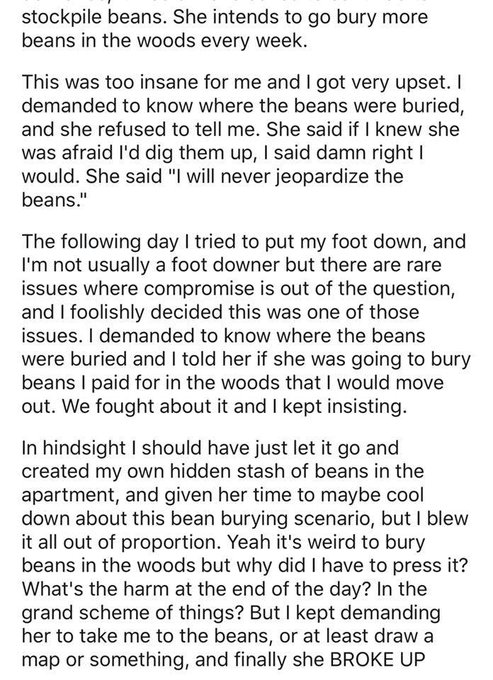 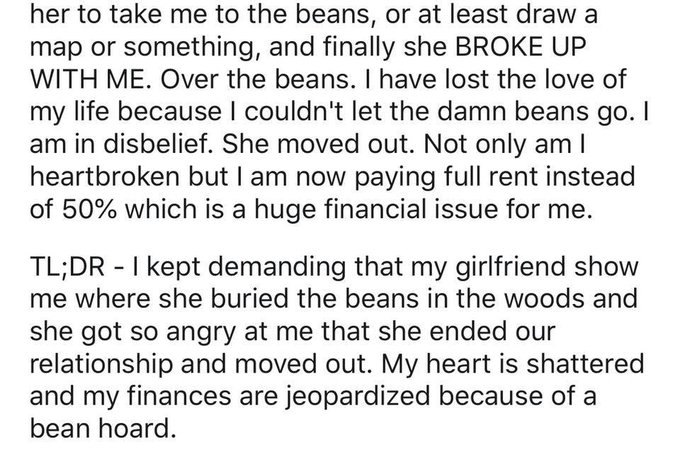 Okay. But where are the beans? It is without a doubt an amazing story:

I gotta know though…..did she tell him where the beans are before she moved out?

I WILL NOT JEOPARDIZE THE BEANS

Wow but I hate to say it
Bean there, done that

ONE WOMAN WILL RISK IT ALL

TO SAVE THE BEANS SHE LOVES

MAD MAX: BURY BEANS, COMING TO A THEATRE NEAR YOU

Yea but what if she gets incapacitated. It only makes sense they both know the bean location.

Only for the gf to just bury them in the backyard with no magic water.

“I will never jeopardize the beans” is now officially my favourite sentence ever pic.twitter.com/t5Aw22t6kl

looking for:
⚪️ a man
⚪️ a woman
🔘 to never jeopardize the beans

The only thing I don’t like about this story is that we never find out if she took the beans with her when she left. Did she come back under cover of darkness to retrieve them? Or is she starting a new cache somewhere else? I can wonder all I want—she’ll never jeopardize the beans.