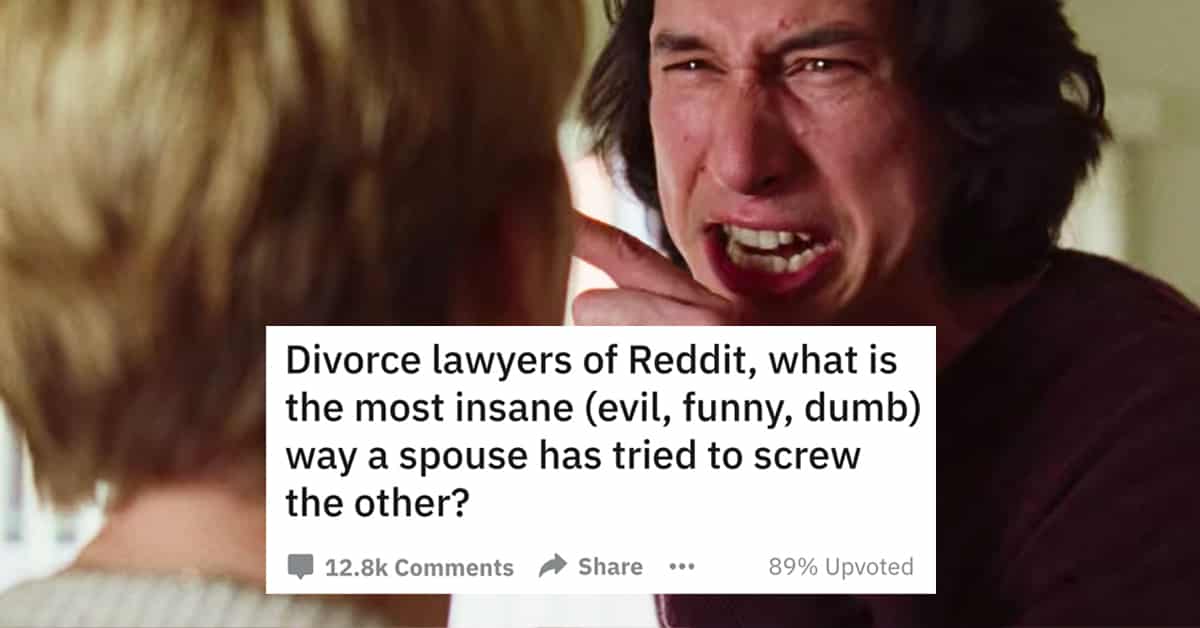 Divorce is rarely pleasant, but sometimes it can be downright cruel. Relationships that should have ended long ago instead get dragged out and slowly deteriorate, building animosity, resentment, and sometimes even hatred between two people who once loved each other enough to commit to “till death do us part.”

Earlier this week, Redditor u/DarkFander14 posed this question to AskReddit: “Divorce lawyers of Reddit, what is the most insane (evil, funny, dumb) way a spouse has tried to screw the other?”

The thread clearly struck a chord with people, amassing over 64K upvotes in four days’ time. Not every response came from a divorce lawyer—some came from family, friends, children, and even the exes themselves—but they are all definitely insane, evil, funny, and dumb. Read through these divorce revenge stories if you’re ever tempted to get married…or divorced.

Divorce lawyer here. Spouse had been out of the house for weeks. She waited until he was on a business trip, came into the house, turned on all of the faucets, plugged the drains, turned off the furnace, and left. It was -10 degrees . He came back five days later. The house was ruined. The water froze and cracked the foundation.—u/Slagathar1

Had a client whose wife wanted him out of the house. I told him not to leave, just move to a different bedroom for the time being because once he was out the chances of him ever getting back in were slim. He texted his wife and told her he was staying in the house.

She called back and left a VM that she wanted him out and if he wasn’t out soon, she would start taking out her unhappiness on the children, and would remind the children that mommy was being mean to them because daddy wouldn’t leave.—Armada5

I’m going to school to be a vet assistant, my teacher is a veterinarian. She told us on Monday she’s had clients bring their animals in to be euthanized so their spouse couldn’t have them. Smdh—u/himoto-liz-chan

My uncle’s ex tried to work it in that she would get half of whatever my grandmother would leave him when she passes. Joke’s on her, my grandmother is passing over her kids (not maliciously, my uncle is very well off and so is my mom) and leaving everything to my brother and me. Oh, also tried to get sole custody of both of their children…who are in their twenty’s…—u/seeyousoonbaboon

I read one where in the settlement there was shared custody of a parrot. Neither were allowed to teach the parrot to swear at the other one.—u/discostud1515

Worked at an airport. Big burly guy brings an ugly ass dog in a crate to the counter, he is clearly misty eyed. Turns out wife got the dog in the divorce and he has to send it to her and she told him as soon as she gets it she is putting it down. He asks if he can have some time with the dog before the flight so they go out in the grass and they both roll around in the grass, dogs tail just waggin away not knowing anything about his future. The guy puts him back in the crate drops him off the counter says thanks and then just walked out head down and just looking crushed.

That was 30 years ago and I still remember it like it was yesterday.—u/alex61821

Paralegal for a divorce lawyer here. Our client told us he didn’t clear out the marital account after the parties filed. Which technically is true, because while he removed $45,000 he left about $3.50 in there.—u/cannabisandcrabs

My prior employer once was ‘served’ with an obviously forged garnishment ‘order’ from an employee’s (ex?) wife, directing garnishment of his wages in an amount that far exceeded his actual wages. We reported it to the police department.—u/hansrudie

I didn’t handle the divorce, I handled parts of the aftermath.

In the divorce, she went AWOL, was living in a truck somewhere, and just couldn’t handle it mentally.

He gave her five of his nine companies.

They were the ones that owed seven figures in payroll taxes.

He had made her the bookkeeper on paper.

She spent decades trying to shake the IRS for the results.—u/Flintoid

Not a divorce lawyer, but my grandma f—ked her divorce lawyer before she served her husband the papers, got pregnant, and then convinced her husband it was his. He paid child support for 18 years and never had a clue. Pretty sh—tty, the lawyer had a family of his own. They have no idea my mom and my family exist—u/envy_313