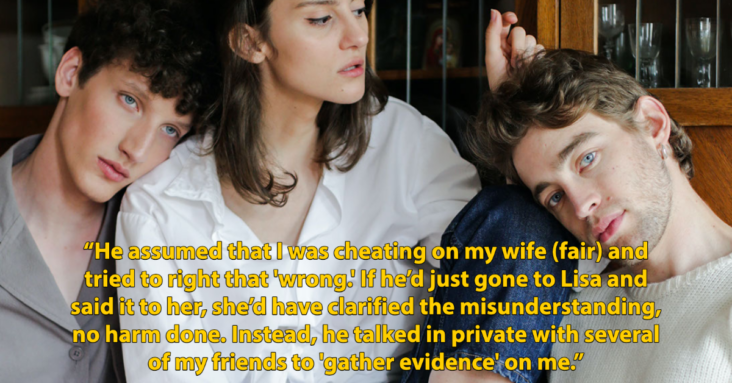 You don’t always know the whole story about your friends’ relationships—and you know what how the old adage goes: “When you assume, you make an a** out of you and me.”

One Redditor is furious at a friend for assuming he was cheating on his wife when in fact, he and his wife have a polyamarous relationship.

When the OP’s friend saw him out with his girlfriend, he went on a quest to “gather evidence” — and outed the OP and his wife as poly.

“I’m polyamorous. My wife, Lisa, has a boyfriend (Jeff) and I have a girlfriend (Natalie). The four of us hang out together, we’re all consenting but I don’t advertise that I’m anything other than traditional monogamous with my and Lisa’s friends.”

“Enter Kevin, a not-so-close friend of Lisa’s who happened to see me out with Natalie ~2 years ago. He assumed that I was cheating on my wife (fair) and tried to right that ‘wrong.’ If he’d just gone to Lisa and said it to her, she’d have clarified the misunderstanding, no harm done. Instead, he talked in private with several of my friends to ‘gather evidence’ on me. Every time, he told our friends that I’m a cheater, low life, monster, etc – one friend was approached on Facebook messenger and screencapped Kevin’s conversation. Kevin said, I quote: ‘Help me take down that f__ing bastard.'”

Kevin finally heard from Lisa that the whole thing was a misunderstanding and she knows all about Natalie. Thus, the OP was “forced to come out as poly publicly to shush the rumors I’m a dirtbag cheater.” Lisa insists that Kevin “thought he was doing the right thing,” but the OP says it’s over between him and Keven, and he does not consider him a friend anymore.

Redditors? Was Kevin being truly malicious?

“Sounds like Kevin has a thing for your wife and was trying to break you guys up so HE could swoop in and be the hero. He is upset that not only do you have a GF but that she has a BF and it’s not him. He is toxic and you have every right to not want him in your life at all,” said MinsAino.

“ESH. Kevin took the whole thing *way* too far, but it seems you dug your own pit here and are blaming him for a lot of other people’s actions. What did you think was going to happen when people saw you with your girlfriend? You can either convincingly present as monogamous-and-faithful, or poly-and-faithful, but you chose the third option: present as monogamous *but also* publicly (as yes, it *is* public if people are finding out about it) have a girlfriend on the low-down. You basically chose to present yourself to the world as a cheater, and then got all Shocked Pikachu Face when someone assumed you’re a cheater *and* thought badly of you for it. It sucks that people aren’t more accepting of poly couples, yes. However, you’re trying to blame Kevin for the fact that 1. you got caught with your girlfriend, and 2. you have a bunch of other a**hole friends who give you sh*t about being poly. Neither of those things are his fault,” noted bob_the_driver.

“If you don’t advertise you’re poly, then it seems inevitable this kind of an understanding is going to happen, though. I don’t think he outed you as poly; you sort of outed yourself from your behavior. Like from his POV, if he saw his friend’s husband cheating and he created an AITA, I’m sure most people would be telling him he’s not the asshole. If you are poly and you’re going to have a girlfriend in addition to your wife, then I think it’s on you to clear up understandings in advance,” said Spotzie27.

“I’m a poly person. If you’re going to be going on dates in public with multiple partners, you gotta be prepared for people you know to see you. Kevin also sounds like an asshole, from what we know anyway, because he didn’t go ‘hey, I saw/am pretty sure I saw OP with someone’ to either Lisa or their other friends, he immediately jumped on ‘taking him (OP) down.’ But this wouldn’t be an issue if even a few of OPs close friends knew. I’m not actively ‘out’ to everyone (for example, work), but if some new friend saw me with a partner and tried to ‘out’ me, my other friends would shut it down real quick. Overall, this should be a lesson for OP/others who want to do generally taboo things with relative ease AND be totally secret about it—be careful if you really don’t want to get caught, and if you can’t tell even trusted people about it, it sucks, but you might face social consequences. But it’s also a lesson for folks who think they spot people doing ‘shady’ things—ask questions when you share this information, because you don’t know what anyone’s situation is,” explained sistersunbeam.